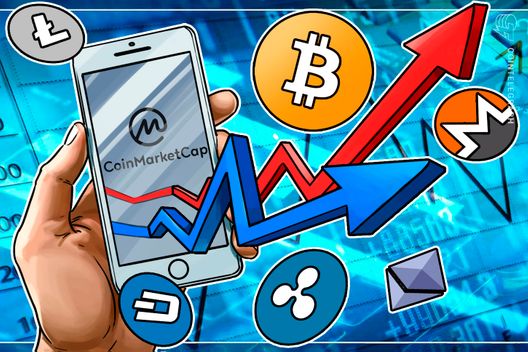 CMC ranks number 175th in the world for most heavily trafficked sites, according to data from Alexa. The site’s stratospheric growth –  it reportedly has had over 60 million unique visits this year to date – appears to ‘track' that of the crypto space itself, as a birthday blog post today on Medium suggested:

“When we launched CoinMarketCap [in 2013], we were tracking seven cryptocurrencies and only a handful of exchanges and markets with a total market capitalization of approximately $1.6 bln USD. As of May 1st, 2018, we are tracking over 1,600 cryptocurrencies and 200 exchanges with a total market capitalization over $400 bln USD! “

The site’s just-launched app for IOS that allows users to sort live data by coin market capitalization ranking, name, 24h price or percentage change, and other parameters offered on the site.

In addition to the app, CMC’s main website revealed some rebranding today, with a redesigned logo and interface, and an upgraded public API.

CoinMarketCap uses data from hundreds of crypto exchanges globally to produce averaged trading prices for cryptocurrencies. In January, the site controversially opted to remove South Korean exchanges from its listings, when the Korean “crypto frenzy” was causing a notable price premium on certain coins, in particular Ripple (XRP). Some altcoins were trading in South Korea 30% above worldwide markets, skewing the site’s average figures.