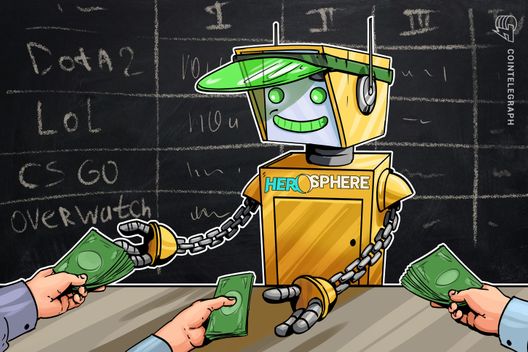 An eSports gaming company is enabling fans to place bets with each other through blockchain, declaring: “There is no need for bookmakers anymore.”

An eSports platform which allows users to challenge each other instead of betting against a bookmaker is preparing to integrate blockchain technology into its newly relaunched website. This comes as it consults with Maltese officials on how its gaming licence could be extended to incorporate cryptocurrency.

HERO is a Vienna-based company that has the goal of bringing back the social element to betting. It believes that the gaming industry lacks innovation and the nature of online betting needs to change, and gaming has become a system where middlemen take unfair fees and untrustworthy bookmakers rip people off. HERO enables users to challenge one another in a system without odds and unfair conditions.

Its decentralized technology is initially going to be integrated into herosphere.gg, an existing platform specializing in eSports prediction and fantasy that has already amassed more than 200,000 registered users. Herosphere currently offers contests across four games: Dota 2, League of Legends, Counter-Strike: Global Offensive and Overwatch. Following the implementation, users will be able to place their bets using HEROcoin (PLAY) – a brand-new cryptocurrency. The bigger plan is to provide its blockchain technology to any other gaming provider over time.

Christina Roth, Head of Communications for HERO, told Cointelegraph: “Our goal is to reintroduce a social element to betting and make it fun and safe for everyone. We see the blockchain as a huge advantage for our industry, helping us to foster what has always been important to us personally: transparency, fairness, and consumer protection."

“There is no need for bookmakers anymore”

The HERO Network’s launch comes at an exciting time for the eSports industry. Data from Newzoo suggests global revenues for this sector hit $655 mln in 2017, and this year, revenues of $905 mln are forecast – an increase of 38 percent. Meanwhile, Goldman Sachs is expecting that the market is going to grow by a compound rate of 22 percent in the three years to 2019 – transforming eSports into a “one billion dollar opportunity.”

Major players in the traditional sporting world have been watching the industry flourish with interest, and now, many want in on the action. The NBA recently announced plans to launch its own eSports league in 2018, and broadcasting behemoths such as ESPN have started to show eSports tournaments on their channels. According to research from The Next Level, 2017’s highest-rated show was Madden Challenge on CW, with 670,000 people tuning in. On Twitch, 40 mln hours were spent watching Dota 2 coverage – 21.3 mln of them eSports, according to Newzoo.

Although revenues per eSports fan are modest at the moment, they are growing. In 2016, it was estimated that every enthusiast was worth $3.50 a year – considerably lower than the average $15 that was spent by a basketball fan. However, HERO says expenditure and demand is increasing, with revenues of as much as $11 per fan, per year possible by 2019.

The HERO Network, a fully transparent system, allows the community to create games – with other users making peer-to-peer predictions on the outcome. Smart contracts on the Ethereum blockchain are going to be used for automating the process of buy-ins and payouts, creating transparency and trust when transactions are being made.

Users who create a contest – for example, the opportunity for others to bet on the outcome of an eSports event – will be able to set their own reward, with a customized percentage of the total amount wagered being paid into their account. All contests will also come with something known as a General Reward, with at least 1 percent of the funds in pots across all platforms and providers going back to token holders.

HERO, which is based in Austria, has been pioneering legal changes in its home country when launching Austria’s first ICO last September.

“We are not focusing solely on our own product”, Paul Polterauer, CEO of HERO, told Cointelegraph, “but we are interested in enabling change for the industry as a whole.”

Currently, HERO is advising Malta on how cryptocurrencies could be used in the gaming sector and has just finished their feedback on the second draft of the license. The country has a gaming license which is applicable for businesses across the European Union, and is planning to have it ready for application within the next months. “It’s an exciting time for us, but also for the industry”, says Polterauer.

Roth added: “When Malta was looking for stakeholders, they wanted experts who were experienced in dealing with complex regulations and reached out to us."

The company is on track for its official release of the first use, where herosphere.gg will integrate the HEROcoin within the next weeks and prove an example for other providers.