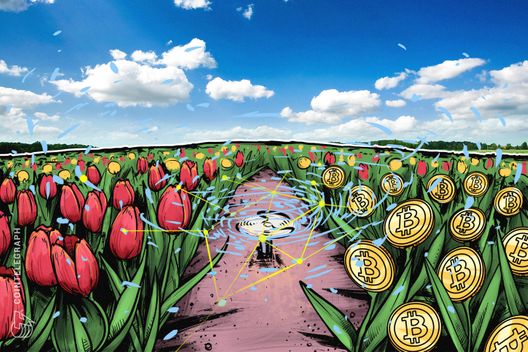 An executive at Vanguard Investment has made the by now trite comparison of cryptocurrencies to tulips, while also noting his appreciation for blockchain tech.

The global chief economist of a major investment firm has criticized cryptocurrencies in an op-ed on investment fund news site ETF.com published yesterday, May 21.

Joe Davis, the global chief economist and global head of Vanguard Investment Strategy Group, stated that while blockchain technology shows promise, the rise of cryptocurrencies can be compared to the Netherlands’ 17th century “tulip mania,” a classic example of a bubble market.

Davis, whose firm manages a reported $5.1 trillion in assets globally as of this January, began the piece by remarking on his enthusiasm for blockchain technology – which he notes Vanguard uses – but adds that:

“As for bitcoin [sic] the currency? I see a decent probability that its price goes to zero.”

Davis then makes the arguably misleading comparison between cryptocurrency and 17th century Holland’s craze for tulips, pointing out the cryptocurrencies, “unlike tulips, […] don’t look very nice in a vase.”

According to Davis, it is debatable whether cryptocurrencies are really currencies, since – according to him – they can be considered a unit of account and a medium exchange, but not a store of value:

“Even if cryptocurrencies qualify for niche purposes, their prospects seem dubious.”

Davis then writes that since cryptocurrencies create no cash flow or dividends, have prices based on speculation, are not connected to the value of blockchain technology, and make crypto investors lower their investments in traditional markets, “the investment case for bitcoin is hardly compelling,” continuing:

In the fall of last year, Nasdaq wrote a piece on the five reasons why Bitcoin (BTC) was nothing like the tulip mania, writing that the growth of the leading cryptocurrency is “not a bubble.”

In fact, the breadth of the tulip mania itself has apparently been over exaggerated, with researcher Anne Goldgar writing in her book on the subject that “there weren’t that many people involved and the economic repercussions were pretty minor.”

After Wall Street mogul Warren Buffett also came out strongly against Bitcoin earlier this month, referring to it as “rat poison squared,” Cointelegraph published an Expert Take on why Wall Street will be left behind if it fails to invest in the promise of new technologies like blockchain.