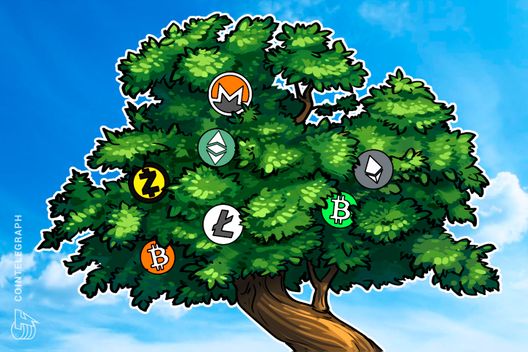 Circle has launched a new feature for its crypto investment app that lets users invest in its seven supported coins at once.

Goldman Sachs-funded Circle Internet Financial Ltd. has launched a new feature for its crypto investment app Circle Invest that makes it easier for “newbies” to enter the market.

The feature, dubbed “Buy the Market,” gives customers the option to invest in all listed coins at once, rather than having to decide between coins individually, according to a Bloomberg report Tuesday, May 22. The app splits their investment – which can be as little as $1 –  according to the coins’ market capitalization weightings.

“The vast majority of invested capital by individual [and retail] investors […] whether it’s stocks or bonds or currencies or crypto –  is more passively managed. If you’re a [crypto] newbie […] this is a tried-and-true model that’s worked in retail investing.”

Allaire emphasized to Bloomberg that by setting a low investment minimum, the company hopes to pave the way for more people to engage with crypto. Allaire argues Circle’s “Buy the Market” option is a more democratic version of U.S. crypto exchange Coinbase’s similar Four-Coin Index Fund, which is open to “accredited” investors only – defined in the U.S. as those with a net worth of more than $1 mln or an annual salary of over $200,000.

Allaire suggested that other companies may be narrowing their investor base due to concerns about a potential U.S. Securities and Exchange Commission (SEC) crackdown to classify more tokens as securities, but emphasized that he thought Circle’s listed coins do not fall into this category. Notably, Ethereum was most recently caught up in a regulatory controversy over whether or not ETH sold during its 2014 presale is a security under U.S. law, though many argue it will escape the classification.

Circle’s CEO also told Bloomberg that since its acquisition of major crypto exchange Poloniex Inc. in February, Circle had been engaged in clarifying regulatory matters with the SEC.

Just last week, news broke of Circle closing a $110 mln fundraising round led by leading crypto mining hardware manufacturer Bitmain. The two companies also announced they were partnering to create a USD-backed stable coin by summer 2018. The investment brought Circle’s valuation to nearly $3 bln, more than a sixfold increase since 2016.