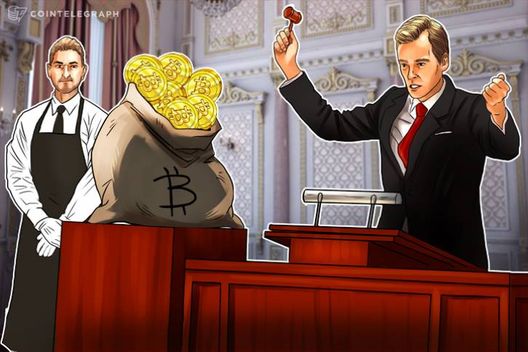 German authorities have sold off bitcoin seized in criminal proceedings for €12 mln.

Prosecutors in the German federal state of Bavaria have sold seized cryptocurrency worth €12 mln ($13.9 mln), the highest such sale in German legal history, local news Der Tagesspiegel reported May 28.

The sale reportedly involved 1312 Bitcoins (BTC), in addition to significant amounts of other digital currencies, including 1399 Bitcoin Cash, 1312 Bitcoin Gold, and 220 Ethereum. Cryptocurrencies which were seized during criminal proceedings were sold over the course of two months in 1,600 individual transactions. The prosecutors commented the sale:

"Since all cryptocurrencies are exposed to the risk of high price fluctuations or even total loss, the Bayern Central Cybercrime Office ordered an emergency sale.”

The funds were collected during criminal proceedings against online platform "Lesen und Lauschen," which offered over 200,000 e-books and audiobooks illegally, asking as little as several cents as payment. According to Der Tagesspiegel, at least 30,000 people used the platform. The site operators were arrested last June by officers from the Bayern Central Cybercrime Office, who subsequently banned the website.

Auctioning off assets seized during criminal investigations is common practice by law enforcement agencies worldwide. While Germany raised nearly $14 mln from its cryptocurrency sale, the US Marshals Service raised over $40 mln for 3,812 BTC seized in the course of civil and criminal proceedings in January.

Last year, Bulgarian police seized 213,519 BTC after they busted an organized crime group that was recruiting corrupt customs officers. At the time of the seizure, the sum of BTC was roughly $3.3 bln, enough to pay off one-fifth of Bulgaria’s national debt. Today, the same sum is worth $1.5 bln. At press time BTC is trading at $7,101.