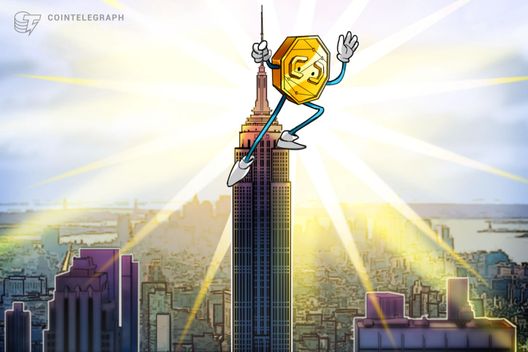 Historically a business-friendly center and international financial hub, New York is not that welcoming to crypto.

Although New York is historically a business-friendly center and international financial hub, many industry players have criticized the regulatory requirements enforced by the New York State Department of Financial Services (DFS) through the BitLicense since its release date in 2015.

Most of these criticisms were confirmed in a round table held earlier this year by New York State senators Jesse Hamilton and David Carlucci, who invited cryptocurrency companies to raise their concerns about the BitLicense.

Stakeholders reiterated that the regulatory requirements set by the DFS are too burdensome for small companies to bear, that it’s a one-size-fits-all regulation and ultimately that it stifles innovation

Even before the initial release of BitLicense back in 2015, the Editor of MIT Media Lab Digital Currency Initiative, Brian Forde, alluded to the fact that this is what will happen, with only the largest companies possessing ample resources able to comply with the strict regulations.

“If changes to the proposed BitLicense are not made, only a handful of the most well-funded companies will survive — not because they are providing the best product or service, but because they have access to the most money.”

The BitLicense is issued by the DFS to those able to meet regulatory requirements and engaging in one of the following activities:

The DFS has also indicated that cryptocurrency mining will not form part of the regulation.

Some of the regulatory requirements include:

The BitLicense became effective in New York on June 24, 2015 but in the three years since then, only five crypto-related companies have been approved for a BitLicense in the state.

This is perhaps a testament to strict regulatory burden it imposes on companies, but also to the demanding 31-page application form that has to be completed as a very first step.

Out of the very few companies who have been granted a BitLicense, is XRP II LLC, an affiliate of Ripple, with none other than Ben Lawsky, former DFS Superintendent and chief architect of the BitLicense, on the board of directors.

Not everyone thinks the BitLicense is bad for business though. The current DFS Superintendent, Maria Vullo has stated in her Spring Meeting Remarks that "The regulatory structure that we created for virtual currency has helped our licensed companies attract greater interest from customers, investors, and potential financial services partners seeking to pursue further innovation, while protecting market integrity by stringent standards applicable to all law-abiding business enterprises."

Since its release, the strenuous requirements of the BitLicense have forced many crypto startups to leave New York, in a movement that’s been dubbed the Bit-exodus.

Jesse Powell, founder and CEO of Kraken, a Bitcoin exchange, explained why his company decided to leave New York.

"There were some things about it that were just untenable … having to disclose all the information about your global client base to the state of New York – we just couldn't live with.”

CEO and Founder of ShapeShift, another cryptocurrency exchange that left New York, also cited restrictive innovation as their reason for leaving the area.

"I went from loving the city and seeing it as a symbol of progress … to seeing it as an enemy of innovation. The regulators here want to treat every financial entity like a bank … we aren't banks, we don't want to be banks … everything we build is to do something in opposition to what banks have done,"

Other crypto companies that followed suit in the wake of the BitLicense storm include LocalBitCoins, Rebit, Genesis Mining, BitFinex, to name a few, with others, like Eobot, having to shut down operations entirely.

How is it affecting New York’s cryptocurrency opportunities?

The Consensus 2018 panel agreed that New York is the financial capital of the world but the blockchain community is international, and ultimately that the enforcement of the BitLicense is more harmful to the state than it is for the international cryptocurrency community.

The BitLicense is in stark contrast to New York’s welcoming attitude towards cryptocurrency opportunities and blockchain as a whole in the state.

Earlier in May, the President and CEO of the New York City Economic Development Corporation (NYCEDC), stated that there’s no city in the world that’s better positioned to lead the way in blockchain innovation, as he announced a number of blockchain-related initiatives for the city, including an NYC blockchain Resource Center and a public competition for blockchain-based apps.

New York has also embraced cryptocurrency innovation in the past by being one of the first cities where property could be bought using Bitcoin, to install Bitcoin ATM’s and where diamond retailers accepted payment in Bitcoin. Support for crypto even showed up in the NY fashion week and at one point New York was named as the second most Bitcoin-friendly city in America.

In the absence of any real federal regulation dictating cryptocurrency-based operations in the US, state regulators have a real opportunity to entice these organizations to move their business into their jurisdiction.

Even the Securities and Exchange Commission (SEC) hasn’t introduced any specific crypto related governance, other than whether or not tokens launched through an initial coin offering (ICO) should be considered as a utility or a security, and as such, might be subject to regulation.

An unlikely state like Wyoming has taken advantage of this and shown that even though regulations are necessary to protect consumers, it can be done in such a way to promote cryptocurrency and blockchain operations, rather than chasing innovation away. In the space of several weeks, the state passed five separate bills for the advancement of cryptocurrency and blockchain technology.

Given New York’s reputation as a global financial hub that has attracted businesses from all over the world and supported innovation across many industries – including in the blockchain and crypto space – it is curious, to say the least, why regulators have chosen to go fundamentally against the grain with overbearing regulations. Especially if we consider that, at the moment, any cryptocurrency regulation in the US is more state driven rather than federal.

Although Genesis’s BitLicense application approval is a step in the right direction, the consensus is that the BitLicence process has all but destroyed the New York-crypto relationship and has been bad for innovation and business as a whole.

There might, however, be relief on the horizon for cryptocurrency startups in New York, including for those looking to move back into the state lines. Earlier this year, New York State Assembly legislator, Ron Kim, proposed a bill to effectively replace the BitLicense process, relaxing regulatory requirements and entice crypto investors back into the Empire State.

The current bill status is “In Committee” and still a few steps away from being passed but, if enough support is garnered, could signal the end for the BitLicense and perhaps a fresh start for cryptocurrency investors and businesses in New York.