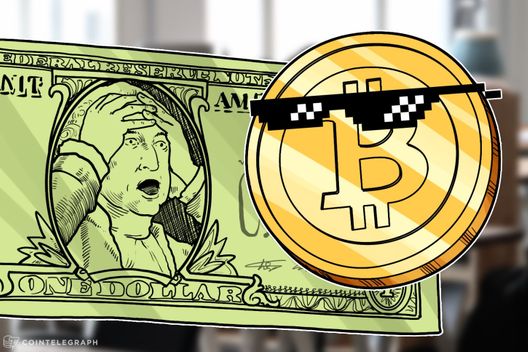 An IMF official said that central banks should compete with cryptocurrencies by making fiat currencies better and more stable units of account.

An official from the International Monetary Fund (IMF) suggested that central banks need to make fiat currencies “more attractive for the digital age” in an article published May 31. Deputy Director of the Monetary and Capital Markets Department Dong He suggested three responses to combat potential competition to central banks from cryptocurrencies.

First, He stated that, “[Central banks] should continue to strive to make fiat currencies better and more stable units of account.” He stressed the role collective expertise and experience play in monetary policymaking. The article quotes IMF Managing Director Christine Lagarde, who said that “the best response by central banks [to crypto] is to continue running effective monetary policy, while being open to fresh ideas and new demands, as economies evolve.”

The deputy director then argued that it is necessary to regulate the use of crypto assets to hold off regulatory arbitrage and any “unfair competitive advantage” crypto assets can get from lighter regulation. He explained:

He also suggested issuing a central bank digital currency (CBDC) to “make their money more attractive for use as a settlement vehicle.” He said that a CBDC could reduce transaction costs for individuals and small businesses, as well as allow long-distance transactions:

“For example, they could make central bank money user-friendly in the digital world by issuing digital tokens of their own to supplement physical cash and bank reserves. Such central bank digital currency could be exchanged, peer to peer in a decentralized manner, much as crypto assets are.”

He suggested that central banks can profit from the underlying technology of crypto assets, saying that monetary policymaking can benefit from technology by improving central banks’ forecasts using big data, artificial intelligence, and machine learning.

IMF officials have sharply criticized cryptocurrencies in the past, and suggested they be more thoroughly regulated. Earlier this year, Christine Lagarde stated that regulation of cryptocurrencies is “inevitable” and necessary on an international level, focusing on regulating “activities” over “entities.”

In March, Lagarde said that crypto markets must be regulated by the same laws that apply to traditional markets. She argued that cryptocurrencies could threaten the stability of traditional financial markets, and that regulations must be developed on a global scale with help from the IMF.