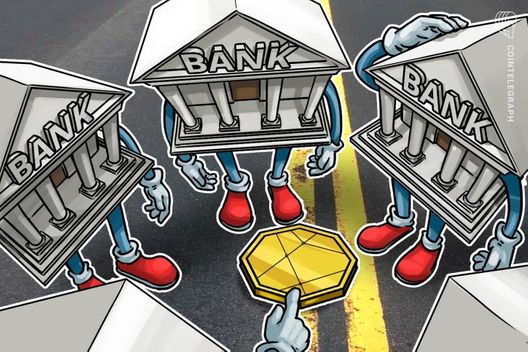 Representatives from several central banks in Europe and one in Canada spoke at Money20/20 today about why fiat is not particularly threatened by crypto.

Representatives from multiple central banks discussed whether or not cryptocurrency could spell the end of fiat currencies during the Money20/20 conference in Amsterdam today, June 5.

During a panel talk titled “Cryptocurrency, the Central (Bank) Question”, representatives from the Swiss National Bank, the Bank of Lithuania, the Bank of England, and the Bank of Canada took turns responding to the question “Can cryptocurrencies spell the end of fiat currencies?”.

Bank of Canada executive James Chapman stated that cryptocurrencies are only a threat to fiat currencies in a “situation of hyperinflation”. Thomas Moser, an alternate member of the governing board at the Swiss National Bank, agreed with Chapman, adding that they are also a threat when a currency “is not performing well.” Moser also noted:

Moser mentioned during the panel that “cryptocurrency is very well tolerated in Switzerland so far.” The country, and in particular its Zug “Crypto Valley,” has been touted by some as an attractive place for crypto companies, due to its balanced approach to Initial Coin Offerings (ICO) and its status as a crypto tax haven.

Martin Etheridge, Head of Division at the Bank of England, called the question of what a currency is and how important cryptocurrencies will be in society “totally relevant.” Addressing the question at hand, Etheridge said he doesn’t “see much prospect of the current iteration of crypto assets in replacing fiat currencies,” though he added “who knows what the future will hold.” He concluded:

“[But] I think the odds are stacked very much in favor of fiat currencies. I think it would take a pretty fundamental shift of public perception or the existing market system for it to happen.”

At the end of June, Bank of England governor Mark Carney said the bank was open to the idea of a central bank-issued digital currency, but added that the adoption of digital currency won’t happen soon and that cryptocurrencies are not currently considered money.

“If our product is good, we don’t need to talk about the cryptocurrencies. It’s a matter of trust […] but if the society starts questioning, or it if it thinks that the things we are selling could be got in a cheaper, more convenient way, other things will appear.”

However, Jurgilis did mention that the bank is not “sitting entrenched in our positions,” but that they are hesitant to let something in that “could lead to a major collapse of trust.”