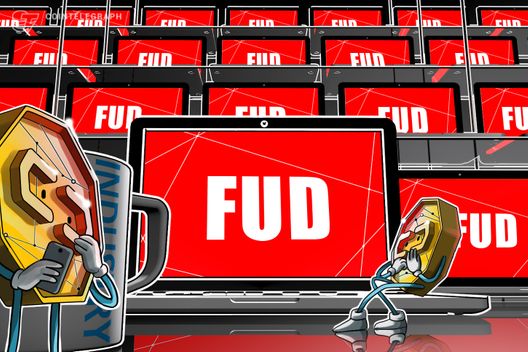 Cryptocurrency users are venting frustration June 11 after mainstream media outlets reported the crypto market had fallen namely due to the hacking of a small South Korean exchange Coinrail.

As both Bitcoin and altcoins fell June 10, sources including Bloomberg, the Wall Street Journal (WSJ), Reuters, the Guardian and others claimed that Coinrail’s hack – which local media reported as causing $37 mln in losses –  had crashed markets. The exchange confirmed the “cyber intrusion” in a tweet Sunday, and in a post on its site, but has yet to specify the value of losses.

“Enthusiasm for virtual currencies has waned partly due to a string of cyber heists,” Bloomberg wrote June 10, citing an Singapore forex trader who told the publication that Coinrail had prompted widespread “knee-jerk” selling, triggering the price drop.

The WSJ added to the sense of confusion emerging out of the latest events while appearing confused about cryptocurrency more broadly, claiming altcoins stolen from Coinrail were “alternative versions of Bitcoin.”

Conversely, both reports acknowledged the insignificant scale of Coinrail’s operation, the exchange being only the 99th largest in terms of trade volumes, trading $2.65 mln on the day leading up the hack.

“Bitcoin fell because people sold and not enough people were willing to buy, not because of a small hack.”

As Cointelegraph previously reported, theories about Sunday’s markey dip include the fact that U.S. regulators launched a probe into four U.S.-based exchanges, while some traders point to long-term fundamentals to explain Bitcoin’s behavior.

Tone Vays, who broadly predicted a significant fall in BTC/USD through 2018, produced fresh analysis highlighting similarities between Bitcoin in Q2 this year and in 2014. Not just price, but several other measures pointed to a protracted period of bear market conditions, he said.

As explained in today's $BTCUSD price video, even if we DO NOT look at the price & only at the 3 most popular Oscillators (#RSI, #MACD, #Stochastics) all metrics put the #Bitcoin outlook Identical to Late Aug 2014. pic.twitter.com/27hXchqJcx

For Vays, Bitcoin should soon drop below $5,000, marking the first such move since October 2017.

Bitcoin is currently trading at about $6,770, down 6 percent on the day.