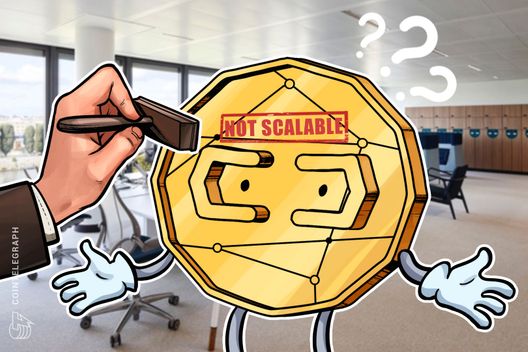 The Bank of International Settlements says that crypto cannot become a medium of exchange, and lacks “scalability, stability of value and trust in the finality of payments.”

The Bank of International Settlements (BIS) has said that cryptocurrencies cannot scale to function as money, in a 24-page article published yesterday, June 17, as part of its annual economic report.

According to the BIS – an organization based in Switzerland made up of 60 of the world’s central banks – cryptocurrencies will not be able to scale to become a medium of exchange in a global economy. The BIS report outlines three key “shortcomings” that will prevent crypto from replacing money – these being “scalability, stability of value and trust in the finality of payments.”

BIS criticizes the decentralization of cryptocurrencies as a flaw rather than a strength, alleging that “trust can evaporate at any time because of the fragility of the decentralised consensus through which transactions are recorded.”

BIS makes the case most blockchains can at best only offer “probabilistic” transaction finality by privileging the longest chain on the ledger to negotiate conflicting transaction validations.

In this vein the report raises alarms over the “forking” of blockchains that can cause cryptocurrencies to split entails the risk of “the complete loss of value.” The report cites an erroneous Bitcoin (BTC) software update in March 2013 that caused the blockchain to temporarily split and the price of BTC to drop “almost a third,” – though BIS fails to mention that the coin regained most of its losses within a few hours.

The BIS also raises concerns that as the shared ledger grows, processing transactions demands electricity and computing resources that exceed even the most powerful facilities.

The “communication volumes” and storage demands associated with mass crypto adoption, the bank argues, could “bring the Internet to a halt.” Less drastically, congestion of the blockchain simply risks that “the more people use a cryptocurrency, the more cumbersome payments become.”

The bank also raises concern over the concentration of power across “all” cryptocurrencies, citing the problem of “manipulation,” with mineable cryptocurrencies being controlled by a small pool of miners who have high-powered processing resources able to keep up competition.

The report is notably focused only on cryptocurrencies that use proof-of-work, permissionless blockchains, although it acknowledges the existence of alternative consensus mechanisms such as proof-of-stake, as well as scaling solutions such as the Lightning Network, maintaining that they “have yet to be proved in practice.”

A March report released by the BIS refuted the effectiveness of so-called central bank digital currencies (CBDCs), warning of their potentially “adverse” consequences, and calling for further research into their possible effects on global financial stability.