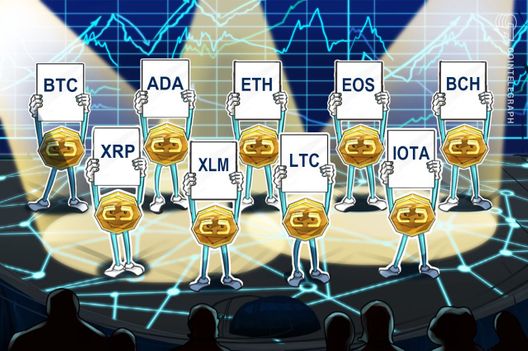 Latest technical analysis of top 9 cryptocurrencies from an expert trader.

In the world of investing, fundamentals and a price of an asset class rarely move in tandem. Usually, one leads the other.

In 2017, the prices of cryptocurrencies skyrocketed, but the fundamentals were left lagging behind. That resulted in a sharp correction. While most digital currencies are down more than 50 percent from their highs, the fundamentals have improved rapidly this year.

Everyone, right from the investment banks to the large corporations are exploring the vast opportunities of the blockchain technology and cryptocurrency trading. The educational institutions, governments, and the central banks are also not left behind. They too are exploring the various options available in this breakthrough technology.

However, the prices have failed to respond to this improvement in fundamentals, and the virtual currencies continue to lose ground on every adverse news. The latest drop has been attributed to the order by the Japanese Financial regulator, which has asked the cryptocurrency exchanges to improve their practices against money laundering and terrorist financing.

This led bitFlyer to stop accepting new accounts temporarily until it makes the improvements. From a long-term perspective, this is favorable news, still, prices are reacting to the downside.

While this is frustrating, it increases the chances of another burst in prices once the sentiment changes. Therefore, we have been on the lookout to spot buying opportunities that show a change in trend.

Let’s see if can spot any today.

The pullback in Bitcoin stalled right at the downtrend line. The failure of the bulls to break out of this overhead resistance has attracted fresh selling by the bears. Now, it’s up to the bulls to defend the major support at $6,075.04.

If the bears succeed in breaking below the psychological support at $6,000, the BTC/USD pair can slide to the next support at $5,450.

The signal to buy when the RSI enters into the oversold territory is not working. This shows that the buying has dried up and selling increases as soon as the digital currency nears the first overhead resistance. Our view of a range bound action will be invalidated if the bears sustain below the $6,000 levels.

But if the bulls defend the support zone between $6,000-$6,075, it will indicate that the virtual currency still remains in a large range. We might propose a long position if the price sustains above the 20-day EMA for a couple of days.

Ethereum did not reach the buy levels suggested by us in the previous analysis. It turned down from the overhead resistance at the 20-day EMA.

With today’s fall, the ETH/USD pair has again entered the descending channel, which is a bearish development. If the bears break below the $450 levels, the next major support lies at $358.

As prices have turned down from the 20-day EMA on the previous two occasions, we shall wait for the bulls to scale this level before suggesting any long position.

Repeated failure of the bulls to scale above the $0.56270 levels has invited a fresh bout of selling by the bears. Ripple is now likely to fall to the final support at $0.45351.

A break of the $0.45351 levels on a closing basis (UTC) will be a negative development because the next support is way lower at $0.24. Such a move will complete a 100 percent retracement of the rally that had started in mid-December of last year.

If the bulls successfully defend the critical support level, the XRP/USD pair might again attempt to rebound above $0.56270.

We shall wait for a new buy setup to form before suggesting any trade on it.

After failing to break out of the downtrend line for three days in a row, Bitcoin Cash has turned down sharply.

The digital currency has a history of sharp rallies and sharp declines. We shall wait for the prices to stop falling, reverse direction and sustain above the 20-day EMA before proposing any trade.

EOS is looking weak. It has failed to attract buying support above the $10.3384 levels, and both moving averages have turned down.

Today, prices have broken down of the 78.6 percent Fibonacci retracement levels. This increases the possibility of a 100 percent retracement of the rally from $5.9610-$23.0290. Though there is minor support at $7.8-$8, it is unlikely to hold.

We shall turn bullish on the EOS/USD pair only after it breaks out of the downtrend line and forms a new buy setup.

After failing to find any buying momentum in the past three days, Litecoin has resumed its downtrend, towards its next support level at $84.708. If this level also breaks, then the fall can extend to $75.131.

Until the LTC/USD pair scales above the $107.102 levels, it will continue to face selling pressure on rallies.

The first sign of a change in trend will be when the bulls sustain above $108 levels. This will confirm that the markets have rejected the lower levels. Until then, it is best to remain on the sidelines.

After remaining range bound for the past week, Cardano has resumed its move towards the next support at $0.13.

The 20-day EMA has acted as a major resistance on the upside since price broke below it on May 09 of this year. Therefore, we shall wait for the digital currency to break out and sustain above the 20-day EMA before suggesting any long positions in it.

The tight range in Stellar has resolved to the downside. The next move will be a fall to the $0.184 levels, which is critical support.

We expect the bulls to defend the $0.184 levels aggressively, but the XLM/USD pair will gather momentum only after it scales above the 20-day EMA and the downtrend line. We shall issue a fresh buy recommendation when we find sustained buying.

Any breakdown below $0.184 on a closing basis (UTC) will negate our view of the formation of a trading range.

After failing to move up in the past two days, IOTA has broken below the June 18 intraday lows, which increases the likelihood of a drop to the major support at $0.9150.

The RSI is near the oversold levels, which increases the possibility of a rebound. However, when the sentiment is bearish, the RSI can get deeply oversold, hence, the traders should wait for an indication of a reversal before risking a buy.

The first signal of a probable change in trend will be when the IOTA/USD pair breaks out of the downtrend line and the 20-day EMA. We shall wait for a new buy setup to form before proposing any trades on it.