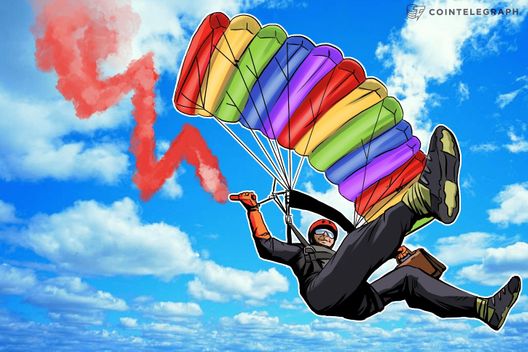 Bitcoin (BTC) is down 1.49 percent over the 24 hour period, trading at $6,672 at press time, according to the Cointelegraph price index. Ethereum (ETH) has seen bigger losses over the past 24 hours, down 3.46 percent, and trading at around $467 at press time. Total market capitalization is above $265 billion, down from yesterday’s high of $280 billion.

EOS has seen the biggest losses over the past 24 hours among the top ten cryptocurrencies. The fifth largest altcoin by market cap is down 11.94 percent, trading at $7.59 at press time. The coin is down over 13 percent in the past week.

On July 8, EOS’ top block producer, EOS New York, tweeted to notify users that a number of block producers crashed due to RAM overload. In a subsequent comment, EOS New York clarified that “the network is live and did not experience any disruption.”

Tezos (XTZ) is the one of the few cryptocurrencies that has seen gains over the 24 hour period, up over 9 percent and trading at $2.33 at press time. The Tezos Foundation launched its beta network on June 30, despite existing controversy around the project.

Earlier today, three major U.S. economists criticized Bitcoin, arguing that the digital coin will fail as a currency. The financial experts expressed concerns over Bitcoin’s volatility and lack of intrinsic value, as well as its anonymous nature, which contradicts the idea of creating “a transparent banking system.” The world-known economists claimed that global financial regulators will “use the hammer” once the market “becomes significant” in terms of capitalization.