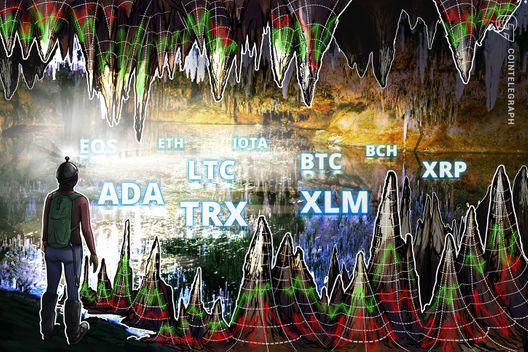 Total crypto market cap has lost almost $40 billion over the past week – what should we expect next?

The total market capitalization of cryptocurrencies has dived to about $266 billion from above $300 billion on July 27. Such price swings are a common phenomenon on the cryptocurrency market. However, investment bank UBS believes that instability is a major hindrance to Bitcoin being considered as money.

Robert Sluymer, head of technical strategy at Fundstrat said to CNBC that if Bitcoin fails to hold the $7,400 mark, a deeper correction to the $6,000 range is possible.

Due to the highly volatile nature of cryptocurrencies, using leverage can be a dangerous decision. An unidentified futures trader on the OKEx crypto exchange has recently found this out the hard way, when his long position netted a massive loss, which will now have to be partially compensated by their counterparties. While without leverage this is a normal trading loss, with leverage this can become unmanageable and result in bankruptcies.

Therefore, we always advise our readers to take smaller positions when buying closer to the lows, in anticipation of a change in trend, so that a small loss doesn’t dent the portfolio. Larger positions can be initiated when the crypto markets are in a bull phase.

Let’s look at the charts to identify whether the path of least resistance is up or down.

Bitcoin dipped to an intraday low of $7,288.97 today, triggering our recommended stop loss at $7,400. The bulls have defended the support at $7,250 and have not allowed the price to dip below the downtrend line of the descending triangle, which is a positive sign.

Currently, the 20-day EMA is flat and the 50-day SMA is turning up. There is a possibility that the cryptocurrency will trade inside a descending channel for a few days and then break out to the upside. In such a case, we can expect the BTC/USD pair to climb to about $9,600 — $10,000 after it clears $8566.4.

As the price begins to trade above $7,750, the probability of a breakout from the channel increases. Traders can buy on a close above the channel, keeping $7,200 as the stop.

We don’t find any trades at the current juncture.

The bulls have pulled the price back into the range of $404.99 — $496.36. This is a positive sign, which shows that the breakdown did not invite panic selling from the traders.

On the other hand, if the bears sustain below $400 for a couple of days, a fall to $358 is probable. The next couple of days will give us a better idea about the likely direction.

If the XRP/USD pair scales above $0.47, a rally to the top of the range at $0.52 is possible. However, as long as the price remains inside the range, it is difficult to forecast the next probable direction.

Therefore, we suggest traders wait for a breakout above $0.56270 to sustain before entering any long positions.

Bitcoin Cash is finding it difficult to sustain the bounce from the bottom of the range. Currently, the price has turned down to the trendline support at $710. If this support breaks, a retest of the $619.751 — $657.8 support zone is likely.

If the bulls hold the trendline support, a small bounce may follow, which will face resistance at the downtrend line.

As long as the BCH/USD pair stays above $620, we consider it to be forming a bottom. The traders should wait for a breakout from this formation before buying.

EOS has been holding on to the bottom of the range for the past two days. Any break of this can result in a fall to $5.1 and below that to $4.3396.

While it is a good strategy to buy closer to the lows of the range and sell at the top of the range, we are not recommending a buy because both moving averages have turned down. We would have potentially attempted entering a long position, had the moving averages remained flat.

Litecoin is close to the critical support at $74.074. The bulls have defended this level since June 24. Hence, a breakdown of this level will be a significant event that can result in a slide to $57, which is the next pattern target on the downside.

If the bulls defend the $74 line once again, the LTC/USD pair will continue to trade inside the range, eventually attempting to rise to the top of the range at $91.146.

The down sloping moving averages show that the sellers are in command and a breakdown of the support is likely.

Traders should wait for the decline to end before attempting any long trades.

Cardano has continued its journey southwards after breaking down of the descending triangle pattern.

It is currently trying to take support at the level of $0.1219. If successful, it might attempt to bounce back above $0.13.

If the bears break below $0.12, the ADA/USD pair can slide further to $0.111843. The traders should wait for buying to emerge before attempting a long position.

Stellar broke below the support line at $0.2544 and is finding some buying support closer to the 50-day SMA. If the bears break below the 50-day SMA, the slide can extend to the bottom of the range at $0.184.

If the bulls hold the 50-day SMA and sustain the bounce above $0.2544, the XLM/USD pair can remain range bound for a few days. Both moving averages are flat, which also points to a probable consolidation.

We shall wait for the range to be defined before attempting to buy close to the bottom.

IOTA broke below the support at $0.9150, thus completing the descending triangle pattern. Our suggested stops on the remaining long position were triggered on August 2, as prices slumped below the June 29 low of $0.8851.

The IOTA/USD pair plunged to a low of $0.7735 today, where buying emerged. Currently, the bulls are attempting to push the prices back above $0.9150. If successful, the pair can move up to the 20-day EMA and above that to the downtrend line.

If the bears defend the overhead resistance, either at the 20-day EMA or the downtrend line and again break below $0.9150, the virtual currency can fall to its next support at $0.666 and below that to $0.5721. We shall wait for the price to sustain above the downtrend line before proposing any trades on it.

If this support also cracks, the next stop is the long-term support of $0.022806. We expect this level to hold.

Any recovery will now face resistance at the $0.03275. We shall wait for the TRX/USD pair to stop falling and form a buy setup before recommending a trade on it.