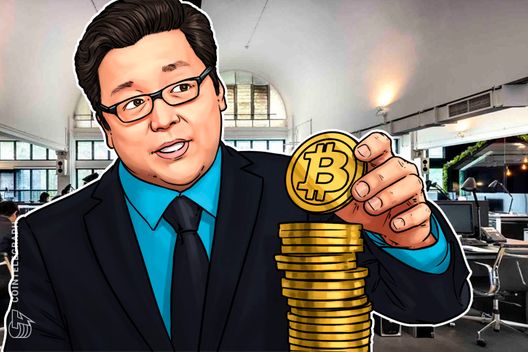 In the interview, the Wall Street bull referred to the current indicators of Fundstrat’s recently launched Bitcoin Misery Index (BMI), which aims to inform investors of how “miserable” holders of the currency are based on its price and volatility.

According to Lee, when the index is below 27, it shows that future returns are very good, while if it surpasses 68 percent, it is “time to sell Bitcoin.” Pointing at the index’s current number of 39, Lee concluded that the momentum is “recovering,” noting

“Bitcoin isn’t broken if it’s holding at these levels. I think people are afraid it is going to go back down to $6,000 and never come back from those bear markets.”

Fundstrat’s head of research also pointed out the current levels of Bitcoin dominance on the crypto markets, which has surged up to around 48 percent over the past several weeks after dropping to as low as 37 percent in July.

As Lee explained, the fact that major cryptocurrency keeps gaining momentum in terms of market share is “actually showing the market is reacting to what’s been taking place.”

Lee also pointed at the recent biggest news in the industry, such as the Intercontinental Exchange’s (ICE) announcement of developing a new global digital assets platform, as well as the U.S. Securities and Exchange Commission (SEC) stating that Bitcoin is not a security.

On Aug. 3, ICE, the operator of 23 leading global exchanges including the New York Stock Exchange (NYSE), announced its plans to build an integrated digital assets platform to enable customers, merchants, and institutional clients to buy, sell, store, and spend digital assets on a “seamless global network.”

In the beginning of July, Lee repeated his stance that Bitcoin could reach anywhere between $22,000 to $25,000 by the end of 2018. Earlier this summer, on June 27, Lee had predicted that the BTC downtrend that took place in June would be reversed if Bitcoin could push through a resistance point of $6,300 to $6,400.