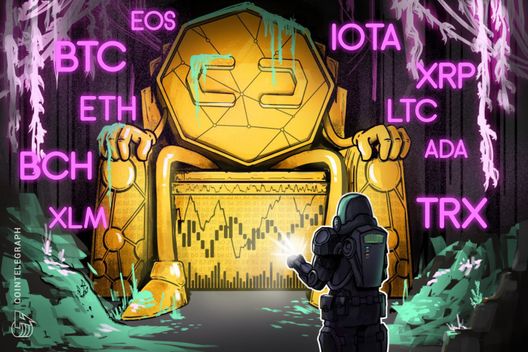 Crypto markets are firmly in the red after SEC postponed its decision on VanEck Bitcoin ETF. Are we in for a continued decline, or is this just a pullback?

The U.S. Securities and Exchange Commission (SEC) has postponed its decision on the Bitcoin exchange-traded fund (ETF) proposal by VanEck Associates Corp. and SolidX Partners Inc. The agency is now expected to make a decision by September 30.

The delay shouldn’t bother the investors because the ETF proposal has not been rejected yet, it has just been postponed. However, the speculators and short-term momentum traders who had hoped for a green light, have dumped their positions. As a result, the total market capitalization of the cryptocurrencies is now at about $228 billion, 24 percent down from July 27 high of $300 billion.

Though Bitcoin’s price has fallen along with the altcoins, its dominance has inched higher, closer to the 49 percent mark. This shows that the leading virtual currency is still favored by investors, compared to the alternatives. When institutional money starts flowing in, we expect the largest digital currencies to be the major beneficiaries. Therefore, it is best to keep an eye on them.

Will the bear market reassert itself or is this a good buying opportunity? Let’s find out.

Bitcoin has broken down of the 50-day SMA and is on its way to the critical support level of $6,000. This support has held on three previous occasions. Therefore, we expect the bulls to try to defend this line once again.

As long as the BTC/USD pair stays above $6,000, it remains inside a large range. If the support breaks, the digital currency will weaken and can quickly fall to the next support at $5,450 and below that to $5,000.

So, should the traders buy in anticipation of a pullback?

Not really. It is best to wait for the pullback to materialize before cherry picking at the lows.

Let’s watch for a couple of days and then make the call, depending on how the pair behaves around the $6,000 level.

We anticipated a breakdown and that is what has happened. Ethereum broke below $404.99 on August 7 and plunged close to the next support at $358.

If the support holds, the bulls will face a stiff resistance at $404.99 and the 20-day EMA. We shall wait for a new buy setup to form before suggesting a trade on it.

The bears forced a breakdown of the $0.4242 level on August 6, which resulted in long liquidation, as a number of stops would have been hit. Ripple has gone below our first target of $0.37942 and is fast closing in on the next target of $0.32862.

The previous support of $0.4242 will now act as a resistance on any pullback. We shall wait for the virtual currency to stop falling before attempting a buy on it.

The BCH/USD pair has a history of vertical rallies, therefore we might suggest a long position as soon as we find its trend changing from down to up.

We anticipate strong buying in the zone of $3.8723 — $4.3396, but the traders should wait for the charts to confirm our expectations. Trades should not be taken based on assumptions but rather on the patterns that form on the charts.

The EOS/USD pair has been an outperformer as it is still quoting above its March and April lows. Hence, we might initiate a buy call on it, after it turns around.

Litecoin closed below the support of $74.074 on August 6 and continued with a sharp drop on the next day.

The next level to watch out for on the downside is the pattern target of $57. Below that level, the next support is in the zone of $48 — $52.

Though the RSI is in the oversold territory, history suggests that the LTC/USD pair rebounds only from the deeply oversold levels. We shall wait for the decline to end and a bottom to form before proposing any long positions on it.

The bulls are attempting to provide some support close to the June 29 low of $0.111843, but if Cardano fails to scale above $0.13 quickly, a steeper fall is likely. The next support on the downside is $0.078215. If this support also breaks, the pair will become very negative.

The RSI is close to the oversold levels; hence, a bounce can’t be ruled out. However, any attempt to pull back will face a stiff resistance at the $0.13 mark and above it at the 20-day EMA.

The traders should buy the ADA/USD pair only after it confirms a bottom and changes its trend from down to up.

The 50-day SMA has failed to provide support and Stellar has resumed its correction to the next support at $0.184.

Since December of last year, the bears have broken down of the $0.184 line on a number of occasions but haven’t been able to sustain below it. The RSI is close to entering the oversold territory, which should result in a bounce.

Any attempts to recover will face a stiff resistance at the 50-day SMA and the 20-day EMA but the XLM/USD pair is outperforming as it is well above the recent lows.

The traders should wait for evidence of sustained buying before initiating any long positions.

After the bulls failed to sustain above the $0.9150 level on August 5, IOTA turned down on August 6. It is currently plummeting towards its pattern target of $0.5721. If this level also fails to provide support, the decline can extend to the next support zone of $0.5 — $0.52.

The RSI is close to the oversold levels, which has previously resulted in a pullback. However, as the IOTA/USD pair is in a firm bear grip, we shall not try to catch a falling knife.

We shall wait for a bottom to form before jumping in. Until then, it is best to remain on the sidelines.

Tron has broken below the support of $0.0281344 and is now heading towards the next critical support of $0.022806. The RSI is close to the oversold levels, which shows that the selling has been overdone in the short-term.

The TRX/USD pair has not broken below $0.022806 since December 22 of last year. Hence, we expect strong buying at these levels.

If this long-term support fails to hold, the virtual currency will become extremely negative. We shall watch for a few days before suggesting any long positions.