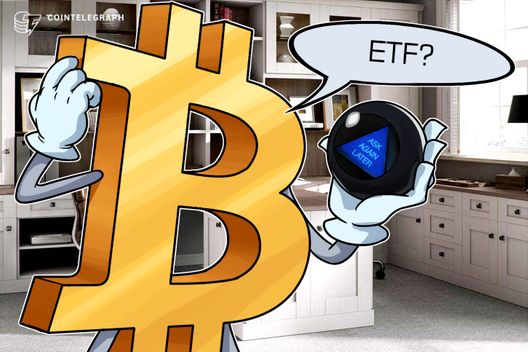 The U.S. SEC has postponed its decision on listing and trading a Bitcoin ETF powered by investment firm VanEck and financial services company SolidX.

The U.S. Securities and Exchange Commission (SEC) has postponed its decision on the listing and trading of a Bitcoin exchange-traded fund (ETF) until September 30, according to an official document released by the SEC August 7.

ETFs are securities that track a basket of assets proportionately represented in the fund’s shares. They are seen by some as a potential step forward for the mass adoption of cryptocurrencies as a regulated and passive investment instrument.

The fund under consideration is powered by investment firm VanEck and financial services company SolidX, and is expected to list on the Chicago Board of Exchange (CBOE) BZX Equities Exchange. The SEC now has almost two more months to consider a proposed rule change by CBOE Global Markets Inc. that would allow the fund to list.

Today’s notice states that the SEC has received more than 1,300 comments on the proposed rule change to list and trade shares of SolidX BTC shares issued by the VanEck SolidX Bitcoin Trust. Per the document, within 45 days of a filing of a proposed rule change, or within 90 days should the Commission deem necessary, the Commission will approve, disapprove, or extend the period of consideration. The document says:

“Accordingly, the Commission, pursuant to Section 19(b)(2) of the Act,6 designates September 30, 2018, as the date by which the Commission shall either approve or disapprove, or institute proceedings to determine whether to disapprove, the proposed rule change (File No. SRCboeBZX-2018-040).”

VanEck and SolidX first announced the physically-backed Bitcoin ETF on June 6. As per the SEC filing, the price of each share of the VanEck SolidX Bitcoin Trust is set to $200,000. SolidX CEO Daniel H. Gallancy told CNBC, that the high price reflects the fund’s intention to focus on institutional, rather than retail investors.

Last month, the SEC delayed its decision on investment firm Direxion’s application for a Bitcoin ETF until Sep. 21. The regulator also rejected an appeal by Bats BZX Exchange, Inc. (BZX) to list and trade shares of the Winklevoss Bitcoin Trust, originally filed in 2016.

The agency cited the largely unregulated nature of Bitcoin markets as the principal reason for refusing the application, stating, “When the spot market is unregulated — there must be significant, regulated derivatives markets related to the underlying asset with which the Exchange can enter into a surveillance-sharing agreement.”