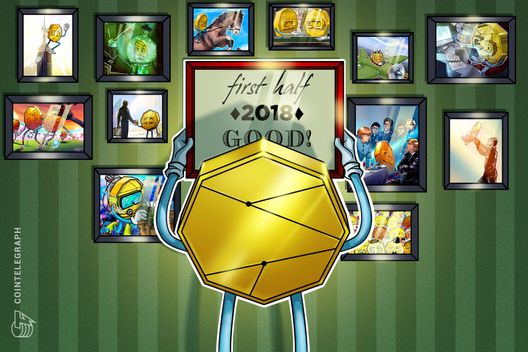 Despite a change in public sentiment toward ICOs and stronger regulatory pressure, ICOs show growth and health for the space in the first half of 2018.

Disclaimer: This article does not contain investment advice or recommendations. Every investment and trading move involves risk, you should conduct your own research when making a decision.

The market data is provided by ICObazaar.

With the first half of 2018 now past, it is poignant to look back at the last seven months of data on the Initial Coin Offering (ICO) market — an important facet of the cryptocurrency ecosystem. Some predicted that the explosion of ICOs last year — with many failures and even more scams — would lead to a collapse in this area, but the statistics tell a different story.

The ICO phenomenon has followed an interesting path since its real boom, starting around May 2017. There has been growth, there has been regulation — as well as changing of sentiment.

2018 has been significantly bigger for ICOs than 2017, with the most successful month coming in March. The data over the last seven months indicates that ICOs continue raising huge sums of money, despite many thinking of them as scams. Additionally, the number of projects launching month by month are pretty steady, even showing growth.

Moreover, the stats suggest that the ICOs in 2018 are aiming for big numbers, with the most popular goals being set between $1 million to $10 million, as well as a significant portion at over $50 million.

The ICO ecosystem — along with the underlying blockchain technology and digital currency tokens — makes up an important facet of the entire cryptocurrency ecosystem. ICOs are walking their own path in relation to regulation and public sentiment. But they are also affected by positives and negatives in the cryptocurrency markets.

Thus, when the SEC ruled that a decentralized autonomous organization (DAO) was a security, and when China decided to ban ICOs on Sept. 4, 2017 — many other state regulators started to take note of the financial risks associated with this form of capital raising.

When in December the fever pitch was reached by the end of the year — with suggestions that the G20 discuss cryptocurrency regulation — alongside Bitcoin’s race to $20,000, ICO capital raised hit a new record. 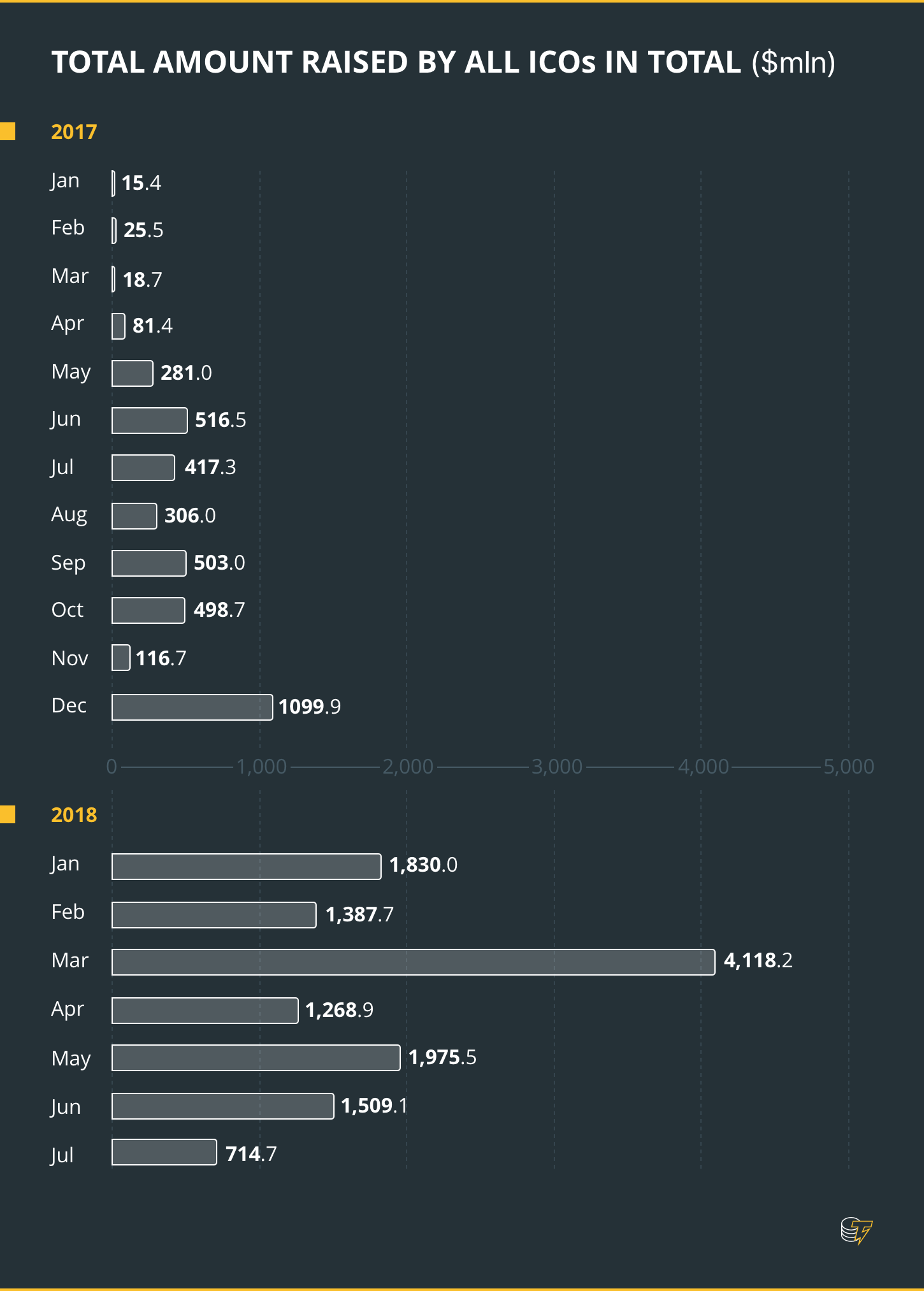 Against the odds, 2018 has been bigger

But January quickly broke December’s $1 billion record, with 254 projects raising $1.83 billion. 2018, thus far, has been a significantly bigger year in terms of the amount of money raised by ICOs. Additionally, the data shows an increase in the number of ICOs that raised this capital in comparison to 2017. 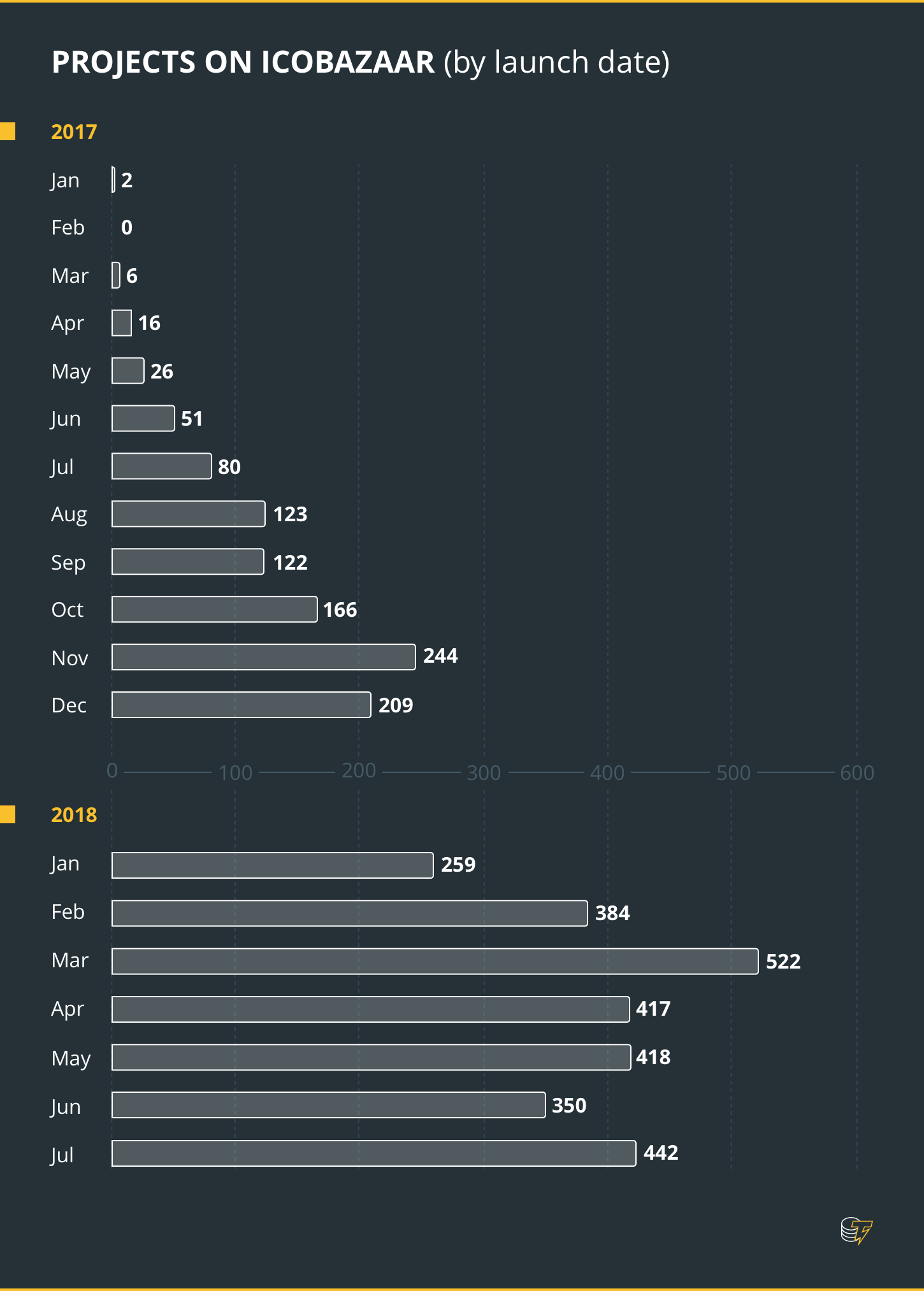 In the past two months — as a recent cut out to give context as to what ICO projects are aiming to raise — it is interesting to note the caps that projects have put up.

When an ICO puts up a cap, it is the maximum amount of capital that it aims to gather. Most of the up-and-coming cryptocurrency projects set their caps so high that they are unlikely to be reached.

However, that number gives insight into where the projects are aiming. Across June and July, the two biggest targets — in terms of the percentages of projects — were between $1 and $10 million, but there was another large grouping of ICOs whose target was to make it to $50+ million. 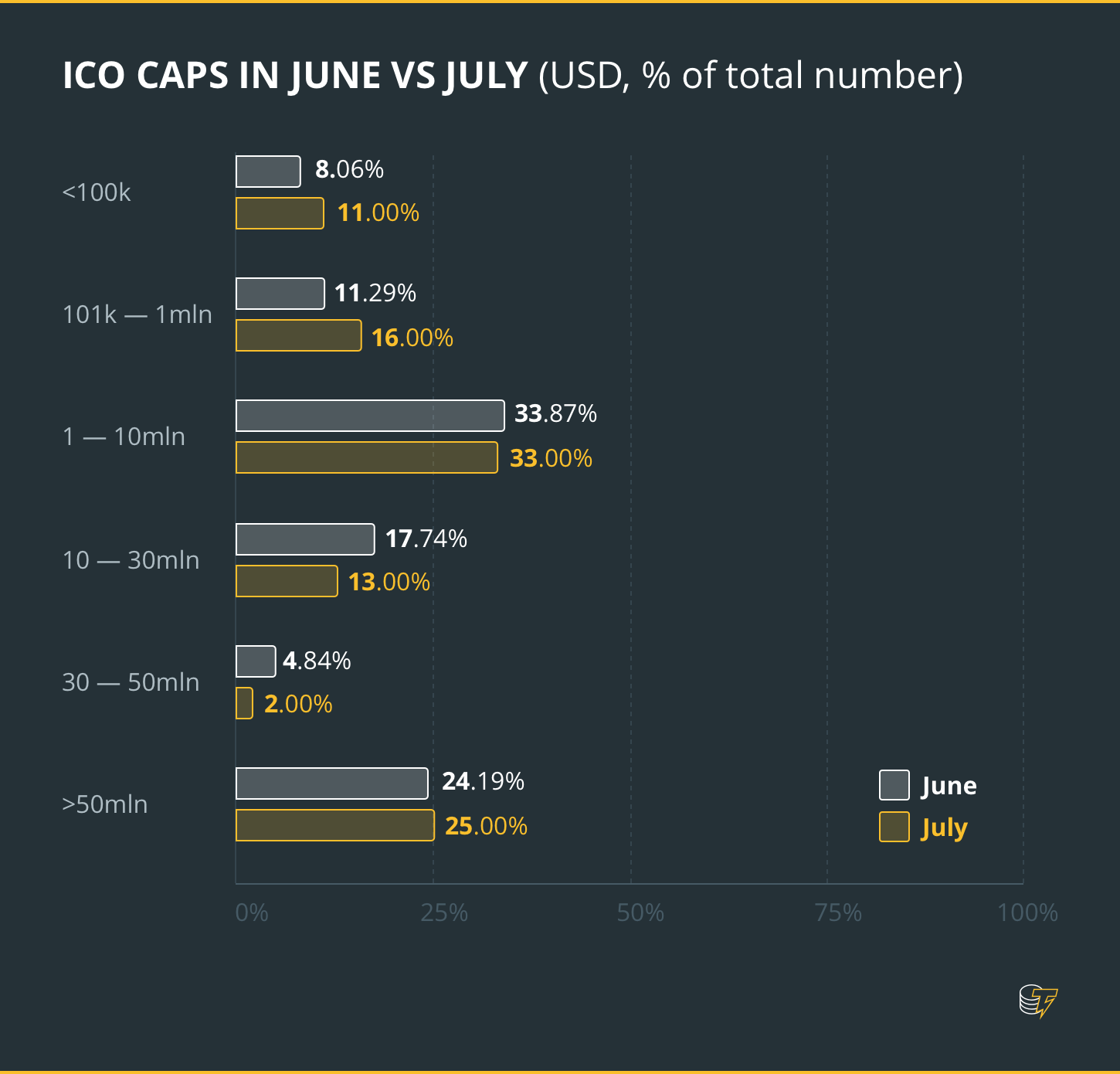 To give a little understanding of the funds raised by ICOs, there were five projects that managed to raise over $10 million in their ICO that ended in July. The top grossing one pulled in an impressive $30 million.

The focus of ICOs

With ICOs being a funding system for a business which is aiming to use the blockchain in some way or another, there are a number of categories where these ICO projects congregate on. Popular categories for ICO projects over 2018 include platforms and cryptocurrencies, but also business services, trading and investment companies. 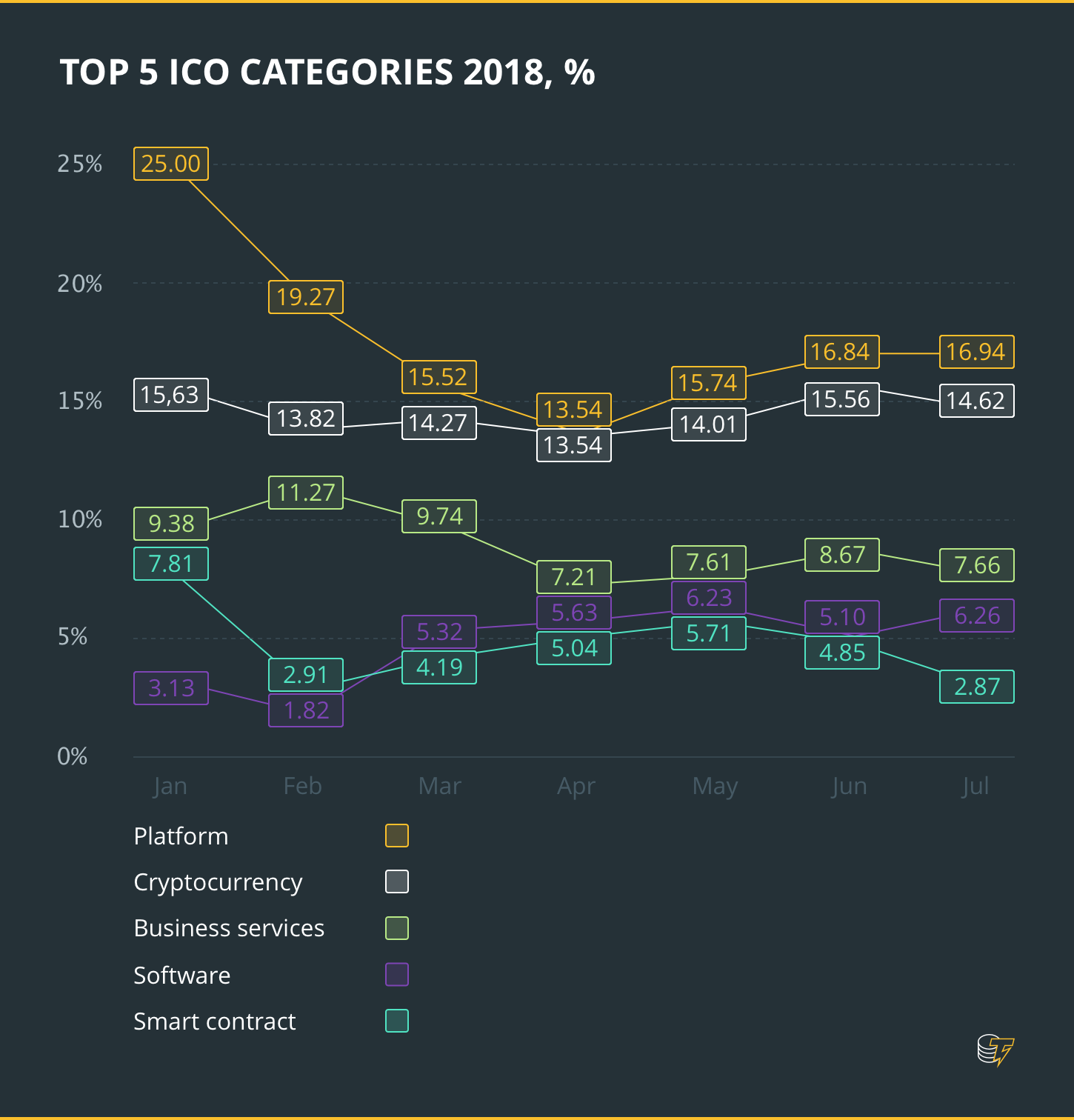 But what has become notable as the year has gone on is that the two biggest categories are getting closer together. For example, in January, platforms accounted for a quarter of all ICO projects, whereas cryptocurrencies were only 15.6 percent. So, while there has been a small growth in cryptocurrency projects, there has been a bigger decline in platforms, as other categories also pick up their stake in the overall situation.

While there are a host of different statistics and figures that can tell a story about the ICO ecosystem, the biggest and most important one is the amount of capital being raised, as well as the number of projects coming out monthly.

Looking at that information, the ICO space seems to be on the rise — which may be surprising to many, as regulations and scams should be making them far less attractive to investors. Yet, money coming in is up, and so are products for the first half of 2018.

However, the next few months will be critical to note, as July was the worst month in 2018 in terms of funds raised.