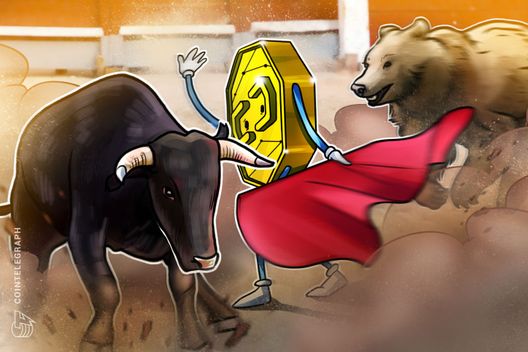 The markets have crashed after the latest SEC decision.

Earlier this week, the cryptocurrency markets slumped: Bitcoin (BTC) lost its $6,500 support, and Ethereum (ETC) dropped well below the $400 mark (rates stand at $6,620 and $319 respectively by the press time). While it’s important to remember that on such a volatile and scarcely regulated market, news might affect the prices to a lesser degree, and the recent drop correlated with the U.S. Securities and Exchange Commission (SEC) decision to postpone its verdict on the listing and trading of a Bitcoin exchange-traded fund (ETF) until late September.

The SEC has gained the reputation of being a major news-maker in the cryptocurrency field: The watchdog’s decisions toward the market have been associated with a number of price drops and bull runs.

In July 2017, the SEC came through with a major decision, putting its mark of interest on the crypto market. The regulator reviewed the infamous decentralized autonomous organization (DOA) case and concluded that DAO tokens, issued via its Initial Coin Offering (ICO) back in 2016, were in fact securities and hence had to register with the SEC beforehand.

By making that move, the SEC effectively showed that many other ICOs, which were abundant during their unregulated, ‘free run’ throughout the 2016-2017 period, might be in trouble as well. In order to determine if an ICO constitutes a security or not, the SEC usually applies the Howey Test — essentially, if a token is marketed as a profit-oriented asset, most likely it will be deemed a security being offered by the agency. However, the watchdog has explained that such decisions are made on a case-by-case basis, as the facts and circumstances of any investment transaction — including economic realities — will determine whether the transaction constitutes the offer of sale of a security.

Even though the SEC decided not press any charges that time, it gave a clear signal that the ICO frenzy could be over. Nevertheless, the market barely reacted: While the top five coins fell in price on the day of the announcement, the overall reaction wasn’t dramatic. Ethereum went down about 10 percent, but soon bounced back to its previous value. It might have been the result of market volatility rather than the SEC news, as such.

The prospect of getting an authority-sanctioned, crypto-backed ETF has been widely discussed in the crypto community. Some believe it will provoke mass adoption, and the prices will ascend, while others remain skeptical — leaning toward crypto-anarchic sentiments. The SEC gets to decide if the industry is ready for an ETF, and the watchdog hasn’t been particularly optimistic thus far.

In either case, the market tends to react to most ETF-related news. A stark example is the recent SEC’s denial of the Winklevoss twins second application on July 26, which happened just prior to the latest ETF-induced panic in the market. The SEC wasn’t convinced by the Winklevoss’ plea that Bitcoin markets are “inherently resistant to manipulation,” which was among the primary reasons for the rejection.

As mentioned above, the Winklevoss brothers had tried registering a Bitcoin ETF before — their first attempt dates back to 2013. That time, it took the SEC four years to come up with a decision: Finally, on March 10 of last year, the agency denied the initial application based on concerns “that significant markets for Bitcoin are unregulated.”

Both times, the market reacted negatively. In March 2017, the price of Bitcoin fell from $1,300 to around $1,100 in a single day. In July 2018, BTC lost over $400 within the span of just three hours, although it managed to regain its value within the following 24 hours — SEC Commissioner Hester M. Peirce’s statement of official dissent, which was published soon after the hearing, could have helped in that rebound. In it, she opined that the agency’s move “sends a strong signal that innovation is unwelcome in our markets, a signal that may have effects far beyond the fate of Bitcoin ETPs [Exchange Traded Products],” recognizing the SEC’s influence in the market.

Similarly, this catastrophic week on the crypto market is largely associated with the SEC postponing its decision on the listing and trading of a Bitcoin ETF powered by investment firm VanEck and financial services company SolidX until Sept. 30.

The VanEck SolidX ETF application was submitted in June and was generally considered to be the most promising among crypto-backed ETFs: It didn’t feature bold assumptions akin to the one submitted by the Winklevoss twins that claimed BTC markets are “inherently resistant to manipulation.” Moreover, the VanEck SolidX fund is physically backed — meaning that it will actually hold BTC — and both firms have reassured that this will protect against the loss or theft of the cryptocurrency. According to their filing with the SEC, each share of the VanEck SolidX Bitcoin Trust is set to cost a hefty $200,000. As SolidX CEO Daniel Gallancy explained to CNBC, the price is set at a higher rate to focus on institutional investors, and the fund hopes to get listed on the Cboe BZX Equities Exchange.

On Aug. 7, the SEC issued a document citing their right to extend the review period. It also stated that the agency had received more than 1,300 comments on the proposed rule change to list and trade the VanEck SolidX BTC shares. Per the document, within 45 days of the filing of a proposed rule change — the trust submitted their application on June 6 — or within 90 days, should the Commission deem necessary, the Commission will approve, disapprove or extend the period of consideration.

While the news seemed rather neutral, and essentially meant that the SEC simply needs more time to rule whether the crypto industry is suitable for an ETF at the moment, panic induced and the markets plummeted: After solid growth to break above the $7,000 mark earlier that day, BTC saw a loss of around $500 in six hours and has lost around 12 percent this week. Similarly, other coins crashed as well — e.g., Ripple (XRP) lost as much as 23 percent of its value since the news was announced.

On the other hand, bullish news on the market that came out recently, like the announcement of upcoming cryptocurrency project Bakkt by the Intercontinental Exchange (ICE), which operates 23 large global exchanges — including New York Stock Exchange (NYSE) — appeared to be largely ignored. In an interview with CNBC, Pantera Capital CEO Dan Morehead claimed that investors were “overreacting” to the SEC postponing the ETF hearing. He predicted that a Bitcoin ETF approval will take “quite a long time,” citing the nascent stage of crypto adoption. The hedge fund manager also stressed that the most recent asset that gained approval from the SEC for ETF certification was copper, a metal that “has been on earth for 10,000 years.”

On Feb. 6, the SEC — along with the Commodities and Future Trading Commission (CFTC) — held a highly anticipated joint hearing in which they elaborated on their stance toward cryptocurrencies, ICOs and blockchain technology. During the meeting, the regulators gave credit to the cryptocurrency industry for adding a new paradigm to the financial system, stressed the importance of fair regulatory frameworks and famously said that “if there was no Bitcoin, there would be no blockchain.”

Consequently, that promoted a bullish trend, and the community reaction following the hearing had a positive effect on the crypto market — which was staggering at the time, likely due to China reiteration of it’s zero-tolerance of crypto, rumors of a ban in India and some mainstream banks prohibiting cryptocurrency purchases with their credit cards. After the SEC/CFTC showed their positive stance in regard to some crypto industries features, Bitcoin and Ethereum saw 20 percent growth in value, and the rest of the cryptocurrency market rallied into the green.

SEC rules that BTC and ETH are “not securities”

The SEC’s approach to cryptocurrencies is still not crystal clear. However, at this point it becomes evident that, while the agency considers most ICOs to be securities, the two leading cryptos — Bitcoin (BTC) and Ethereum (ETH) — are not seen as such. That sentiment was recently voiced by Jay Clayton, the chair of the SEC, who declared that BTC is not a security because it acts as a replacement for sovereign currencies:

“Replace the dollar, the yen, the euro with Bitcoin. That type of currency is not a security.”

A couple of days after that, William Hinman, the director of the SEC’s division of corporation finance, claimed that Ethereum (ETH) isn’t a security either, putting an end to a months-long dilemma that could have potentially ended up with Ethereum’s 2014 ICO being outlawed:

“Putting aside the fundraising that accompanied the creation of Ether, based on my understanding of the present state of Ether, the Ethereum network and its decentralized structure, current offers and sales of Ether are not securities transactions[…] And, as with Bitcoin, applying the disclosure regime of the federal securities laws to current transactions in Ether would seem to add little value.”

That signal was positive for ETH, meaning that it wouldn’t face any charges. Consequently, the coin’s price rose as much as 11 percent, up to $520.68. 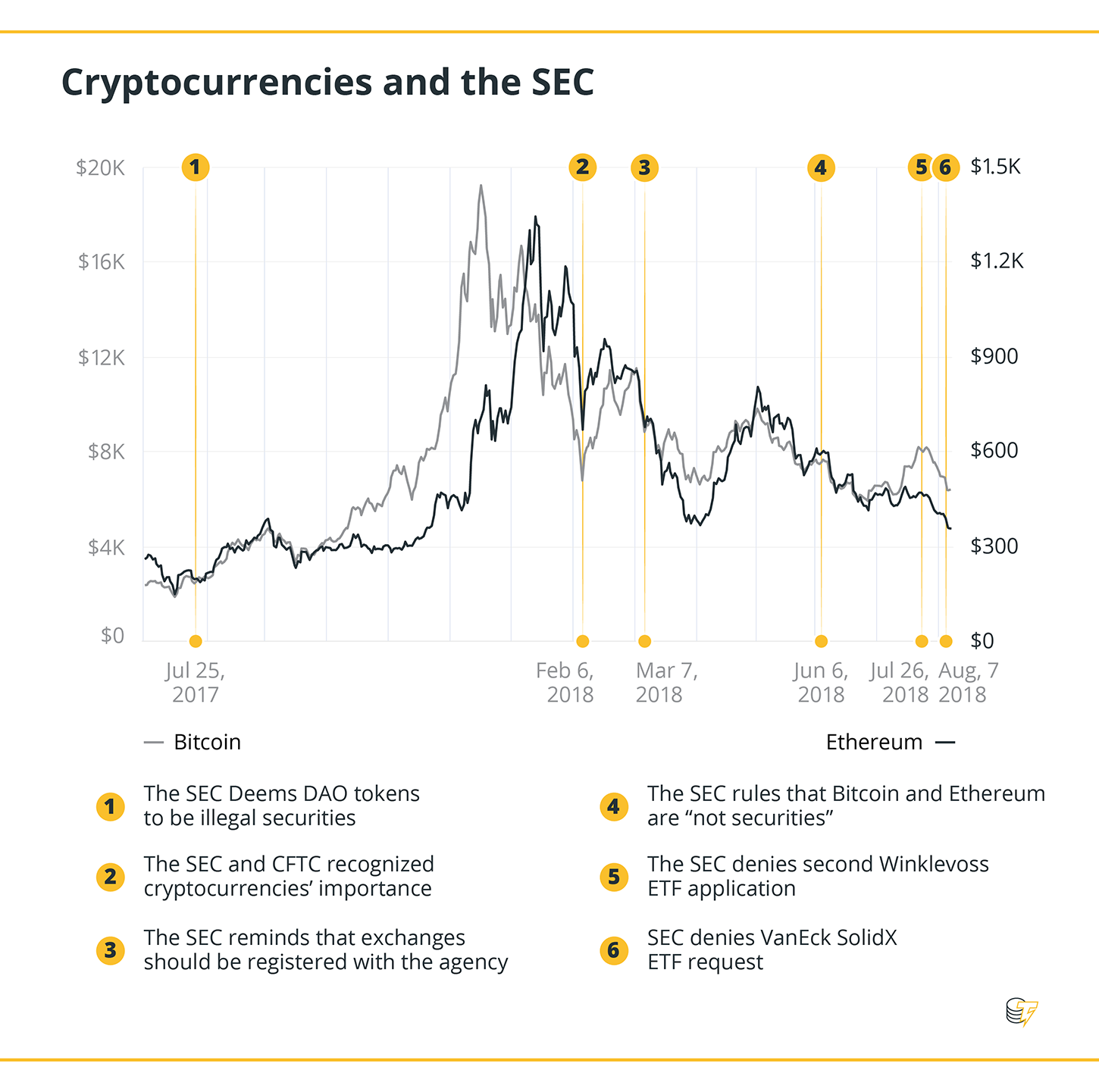 The SEC reminds that exchanges should be registered with the agency

In March 2018, the SEC issued a public warning aimed at crypto exchanges. The watchdog explicitly stated that platforms who trade “securities” — and the SEC deems many altcoins as such — “must register with the SEC as a national securities exchange or be exempt from registration.” The announcement read:

“The SEC staff has concerns that many online trading platforms appear to investors as SEC-registered and regulated marketplaces when they are not.  Many platforms refer to themselves as ‘exchanges,’ which can give the misimpression to investors that they are regulated or meet the regulatory standards of a national securities exchange.”

Hence, major crypto exchanges were urged to comply with the SEC’s regulations, entailing a strick Know Your Customer (KYC) and Anti-Money Laundering( ATL) approach, among other things — some major U.S.-based exchanges, like Coinbase, have since tried to register with the authority.

The news coincided with a noticeable downtrend in the market: For instance, BTC went down 8.6 percent from 24 hours earlier, losing its $10,000 support. However, the surge could have been initiated by other factors, such as rumours about an alleged Binance security breach that were spreading around the time.