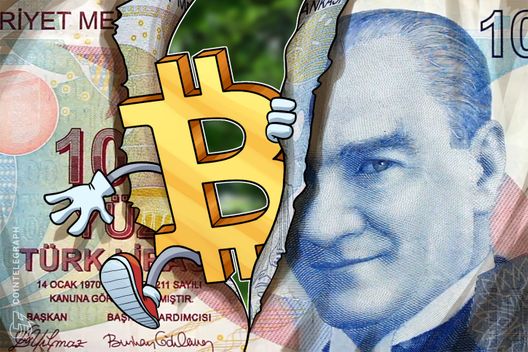 Not just the cryptocurrency industry but even mainstream media outlets have highlighted Bitcoin’s stability versus the Turkish lira.

Leading with the headline “Turkey Meltdown Propels Lira Volatility Above Bitcoin,” Bloomberg became the latest publication to reveal the full extent of the Turkish national currency’s devaluation this year.

“The 10-day swings in the lira relative to the U.S. dollar now exceed those for Bitcoin amid Turkey’s escalating currency crisis,” Bloomberg reports.

Turkey has seen an uptick in consumer interest in Bitcoin since the lira, which had already halved in value against the dollar since January, rapidly slid to all-time lows over a raft of geopolitical factors.

According to data from Google Trends, interest in Bitcoin increased markedly in August, while local exchanges have seen volumes explode by over 150 percent this week alone.

Those exchanges have begun seeing increased volatility, with operators such as BtcTurk trading the coin at prices around $500 higher per Bitcoin than on foreign platforms.

That trend could continue, commentators claim, if the economic situation does not stabilize.