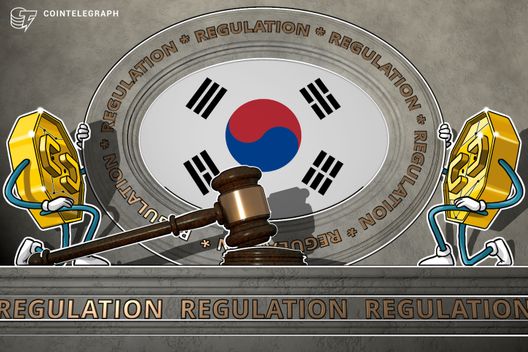 Cryptocurrency exchanges will not fall under venture enterprise legislation, making them similar to bars and nightclubs, the South Korean government says.

The government of South Korea announced it had excluded cryptocurrency exchanges from legislation governing venture businesses in a press release issued Monday, August 13.

The brief document from the country’s Ministry of Small and medium-sized enterprises (SMEs) and Startups (MSS) explained that contrary to previous decisions, it would now place exchanges alongside bars and nightclubs as businesses that it would “not encourage as a venture enterprise.”

A rough translation of part of the press release explains:

“The Small and Medium Venture Business Department [of the MSS] has no intention to regulate cryptocurrency trading and disclosures (ICOs), but as problems such as speculation emerge, cryptocurrency exchanges are not a target for the government to encourage as a venture enterprise.”

The MSS added, “[w]e will also foster blockchain technology and related companies at the government level.”

South Korea continues its intense reshaping of the regulatory landscape around cryptocurrency, having begun the year with a turbulent period which ignited public unrest.

Now, the country’s crypto exchanges face strict banking and taxation obligations, while authorities continue to monitor the industry in a manner similar to the oversight in Japan.

At the same time, blockchain technology has become a long-term focus for investment, the government this week revealing the area would form one of eight it had singled out for major budget spending in 2019 of 5 trillion won (about $4.4 billion).