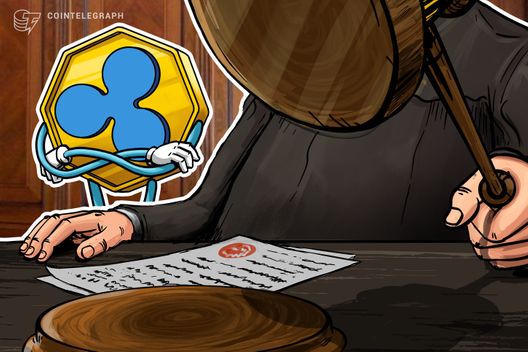 A U.S. federal District Court has dismissed a motion to remand filed against Ripple in May.

The U.S. District Court, Northern District of California has ruled to deny a motion to remand against Ripple, its subsidiary XRP II, and Ripple CEO Brad Garlinghouse, according to an official document issued August 10.

The original lawsuit was first initiated by XRP investor Ryan Coffey in a San Francisco court on May 3, 2018, claiming that he lost $551.89 while trading XRP tokens. The class action was filed by law firm Taylor-Copeland, alleging that Ripple sold XRP tokens in violation of both the U.S. the Securities Act and the California Corporations Code. The plaintiff also claimed that XRP is not genuinely decentralized.

According to court documents, the plaintiff failed to show whether the presence of a Securities Act issue was sufficient to bar the defendant from removing an action under the Class Action Fairness Act. In the ruling the court found that, “The parties candidly admit that their research failed to turn up any case directly addressing this question and the court’s own research fared no better.”

The plaintiff was seeking a “rescission of all XRP purchases, damages, and a constructive trust over the proceeds of defendants’ alleged sales of XRP.”

At the time the lawsuit was first filed, David Silver, a partner at Silver Miller Law Firm, commented to Cointelegraph that “lawsuits like this are simply private litigants testing the legitimacy of these companies,” claiming that it will bring more judicial clarity.

A Ripple spokeswoman said that at the moment the lawsuit was filed, the SEC had not yet decided whether XRP is a security. She claimed, “We continue to believe XRP should not be classified as a security.”

In early June, Ripple appointed former chair of the U.S. Securities and Exchange Commission (SEC) Mary Jo White as a representative in the class action filed by Coffey.

Recently, Ripple released the second quarter 2018 report for its digital asset, arguing that the XRP token price was in line with the overall trend in crypto markets, which “[underscores] XRP’s independence from Ripple.”