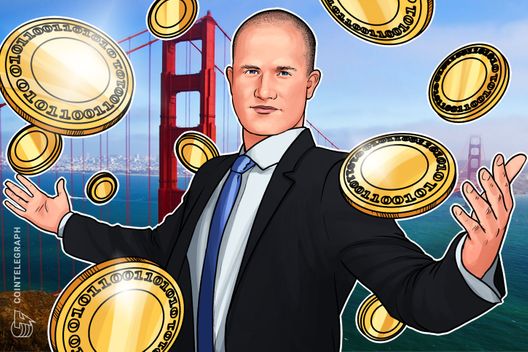 Coinbase CEO Brian Armstrong said in a recent interview that the exchange was signing up 50,000 users a day in 2017.

Cryptocurrency exchange Coinbase CEO Brian Armstrong said in an August 14 interview with Bloomberg that it was signing up 50,000 users per day in 2017.

Speaking at the Bloomberg Players Technology Summit in San Francisco on Tuesday, Armstrong said that the “technology [Bitcoin] is going through a series of bubbles and corrections, and each time it does that, it’s at a new plateau.” He added that “people’s expectations are all over the map, but real-world adoption has been going up,” stating that he sees “real world adoption pretty steadily increasing each year.”

When asked about his expectations for Initial Coin Offerings (ICOs), Armstrong said that ICOs are “an important innovation in the world” as they provide an opportunity for people around the world to raise funds for new ventures without relying on personal networks of angel investors.  “It’s a huge breakthrough,” he said.

While there are legal questions to consider, Armstrong said that he expects the ICO trend to continue, saying that “ICOs are breaking all the previous crowdfunding records.”

Armstrong said that Coinbase helped customers to trade $150 billion worth of digital currencies in 2017. He estimated that about 10 percent of cryptocurrencies are used in real life, in games and other online purchases.

Earlier this week, Coinbase announced the reduction of its Index Fund’s annual management fee “for all new and existing investors” from 2 to 1 percent in order to “attract investors who are familiar with lower-fee index funds in other asset classes.” That day, the exchange also announced that the Index Fund was rebalanced to incorporate Ethereum Classic (ETC), following the altcoin’s official listing on Coinbase last week.

Last week Coinbase successfully renewed its money transmitter license in the state of Wyoming. The license had been suspended as of mid-2014 due to stipulations in state law that required all exchanges to “double reserve” the digital assets of state residents with fiat currency.