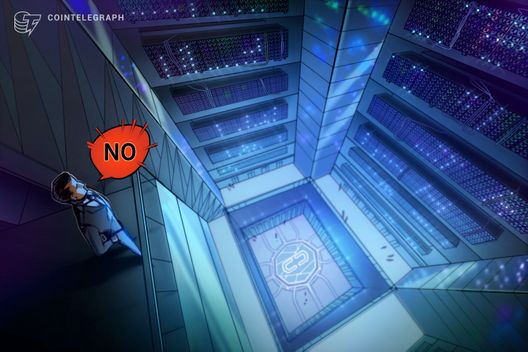 An official from SoftBank has denied their involvement in the investment deal with Bitcoin (BTC) mining behemoth Bitmain that was reported last week by both crypto and mainstream media sources.

As previously reported, Bitmain had allegedly sealed a pre-Initial Public Offering (IPO) financing deal which had brought its valuation to $15 billion. Both Chinese tech conglomerate Tencent and Japan’s SoftBank — another tech giant whose 15 percent stake in Uber makes it the drive-hailing app’s largest shareholder — were purportedly involved.

After receiving an anonymous tip that Tencent and SoftBank were not actually involved in any deal with Bitmain, Cointelegraph reached out to SoftBank and Tencent for confirmation.

As a response to Cointelegraph’s request for information, Kenichi Yuasa of the Corporate Communication Office of SoftBank Group Corp. stated:

Despite numerous requests for clarification, no one at Tencent has denied or confirmed the deal to Cointelegraph.

In response to a media request from Cointelegraph, Bitmain refused to comment on the matter.

The original story on SoftBank and Tencent’s participation in a deal with Bitmain was reported by Chinese publication QQ on August 4. In a Google Translated version of the article, QQ stated:

“The mainland officially completed the Pre-IPO round signing. This round of investors includes Tencent, Softbank [sic], and China Gold. The current round of financing is 1 billion US dollars, and the pre-investment valuation is 14 billion.”

After the story originally broke, there were no official confirmations or denials by either SoftBank or Tencent of their participation in an investment deal with Bitmain.

QQ’s report was picked up by mainstream media sources like Business Insider, which reported on August 14 that Bitmain had closed a “$1 billion funding round led by Chinese tech giant Tencent and Japan’s SoftBank,” linking their source as crypto media site CCN. Yahoo! Finance also reposted the story on Bitmain’s valuation from CCN, also linking to coverage of the matter from crypto news source CoinDesk.

As the media began reporting SoftBank and Tencent allegedly participated in a deal with Bitmain, bringing the company’s reported valuation to $15 billion, Blockstream CSO Samson Mow tweeted August 11 an image — reportedly from the Bitmain pre-IPO investor deck — showing the company allegedly had a large amount of Bitcoin Cash (BCH).

On August 12, Samson Mow also tweeted two images of Bitmain’s Q1 results, one in Chinese and one from Morgan Stanley, commenting:

“Why is Bitmain raising capital so fast & only showing Q1 results to pre-IPO investors? We’re well into Q3 now. The reason is Q2 was a disaster. Bitmain is sitting on a massive $1.24 billion USD in inventory & S9 prices dropped by ~85%! Q2 losses range in the $600-700 millions.”

In response to Mow’s tweets, Crypto Herpes Cat published a follow up on Medium, explaining several theories as to how Bitmain ended up with so much BCH — other than by selling BTC for BCH, as Mow purported — and what they are doing with their ASIC miners in a bear market, writing:

“How do you realize the value of this monolith crypto business and your holdings? You IPO and pass the bag on in one huge lumped stock offering and hope investors don’t realize all of your current assets are very, very illiquid.”

As early as June, Bitmain CEO Jihan Wu had hinted at the firm’s plans to launch its IPO on the Hong Kong Stock Exchange. Chinese publication QQ — the same source that alleged both Tencent and SoftBank’s involvement in the recent financing deal — has recently suggested that the firm will be valued at $30 billion.

The seemingly refuted investments come after a year of reports that appeared to indicate Bitmain’s astonishing profitability.