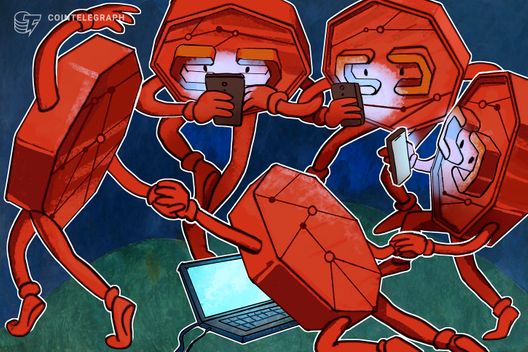 Joseph Lubin doesn’t think that market crashes are all that bad, and Playboy sues in order to get its blockchain integration started already.

Joseph Lubin, the co-founder of Ethereum and ConsenSys, said in an interview this week that he doesn’t believe that crypto market slumps prevent further growth. He added that each bubble brings in a significant burst of activity, as more developers join the community. Lubin noted that the crypto market volatility can be attributed to “trader types,” i.e. speculative investors, saying that it is not necessarily an indicator of underlying infrastructure enhancement.

Playboy Enterprises is suing Canadian firm Global Blockchain Technologies (GBT), alleging that it failed to integrate blockchain technology into Playboy’s online media channels. Playboy had announced in March its plans to develop an online wallet that would enable customers to use crypto and support the Vice Industry Token, with GBT announcing its participation in May. In the lawsuit, Playboy said that the firm not only failed to fulfill the requirements of their agreement to implement blockchain tech, but also omitted a promised payment of $4 million.

In an article this week, Bloomberg writes about the currency crisis in Turkey caused by geopolitical factors, juxtaposing Bitcoin’s comparatively low volatility in the country. According to data from Google Trends, interest in Bitcoin increased markedly within Turkey in August, while local exchanges have seen volumes rise by over 150 percent this week alone.

An U.S. investor has filed a $224 million lawsuit against telecoms giant AT&T over alleged negligence that he claims caused him to lose $24 million in crypto. The plaintiff, Michael Terpin, claims in the lawsuit that the money was stolen via a “digital identity theft” of his cell phone account. Claiming to be a victim of two hacks within seven months, Terpin points to AT&T as letting a hacker acquire his phone number without the proper identification, which later let the imposter gain access to Terpin’s crypto holdings.

US Federal Court Denies Motion To Remand Against Ripple

The U.S. District Court, Northern District of California has ruled to deny a motion to remand against Ripple, its subsidiary XRP II, and Ripple CEO Brad Garlinghouse, in a class action lawsuit alleging that Ripple sold XRP tokens in violation of both the U.S. the Securities Act and the California Corporations Code. According to court documents, the plaintiff failed to show whether the presence of a Securities Act issue was sufficient to bar the defendant from removing an action under the Class Action Fairness Act.

“We’ve seen six big bubbles, each more epic than the previous one, and each bubble is astonishing when they’re happening but when you look back they look like pimples on a chart,” — Joseph Lubin, co-founder of Ethereum, ConsenSys

“What AT&T did was like a hotel giving a thief with a fake ID a room key and a key to the room safe to steal jewelry in the safe from the rightful owner,” — lawsuit against AT&T by investor Michael Terpin, who claims the telecom giant allowed hackers into his phone

The European Parliament’s Committee on Economic and Monetary Affairs is developing new crowdfunding regulations that could extend to some initial coin offerings (ICOs), possibly bringing some ICOs within the remit of the new draft regulatory framework for crowdfunding. According to a report, the draft crowdfunding rules might not be an answer for ICO regulation, but are at the least a “much-needed step.”

A Bitcoin (BTC)-based exchange traded note (ETN) listed on the Nasdaq Stockholm exchange is now being targeted towards U.S. investors as of this week. This “soft” ETF alternative, which has been traded on the Swedish exchange since 2015, is now being quoted in dollars under the ticker CXBTF as of Wednesday. The addition of a dollar quotation for Bitcoin Tracker One, which is still technically listed and traded in Sweden, is considered by many to be a gateway for U.S. investors.

US Square Cash App Expands Crypto Trading To All 50 States

Mobile payment company Square’s Cash App has expanded its Bitcoin (BTC) trading to all 50 U.S. states. Square had first launched Bitcoin trading in November 2017 for a fraction of its users, with the app launching for almost all users in January with the exception of those in New York, Georgia, Hawaii, and Wyoming.

Japanese messaging giant LINE has announced the creation of a $10 million blockchain venture fund as part of its expansion into the cryptocurrency market. The fund, which is launched via Hong Kong-based subsidiary unblock corp., contains funds from fellow LINE sister outfit LVC Corporation. The company commented in a press release that the unblock ventures’ token fund will expand in the future with the growth of the market.

The state-backed Bank of China (BOC) and financial services corporation China UnionPay (CUP) have announced a partnership to look into the application of blockchain for payment system development. According to the announcement, the impetus to explore blockchain came as a response to market demand. The two firms plan on jointly investigating big data and distributed ledger technology deployment in order to improve mobile banking products.

Barbados-based fintech startup Bitt Inc. has signed a Memorandum of Understanding (MOU) with the Central Bank of Curaçao and Sint Maarten (CBCS) in order to develop a central bank digital currency to facilitate financial payments. According to the announcement, the bank is looking to “reduce the level of cash usage within the monetary union” and facilitate more AML and KYC-compliant transactions between the islands.

The Jamaica Stock Exchange (JSE) will work with Canadian fintech company Blockstation to facilitate the implementation of digital currency and token trading on the exchange. Before the deal with brokered, Blockstation completed beta testing in Jamaica with the participating institution and five broker members participated in a live workshop with representatives from local regulators.

Cryptocurrency trading platform SFOX has announced the closure of a $22.7 million Series A funding round with participation from Airbnb co-founder Nathan Blecharczyk, along with Y Combinator, Khosla Ventures, Digital Currency Group, and Blockchain Capital. The Series A funding round, led by co-founder and partner at Tribe Capital and Social Capital, Arjun Sethi, has the goal of adding cryptocurrency pairs, improving trading liquidity, and expanding into “new geographical regions.”

Enterprise-focused blockchain startup Axoni has raised $32 million in a Series B funding round led by Goldman Sachs and Nyca Partners, with numerous other investors including Wells Fargo, JPMorgan, Citigroup, and Andreessen Horowitz. The fresh investment brings Axoni’s total financing to $55 million to date. 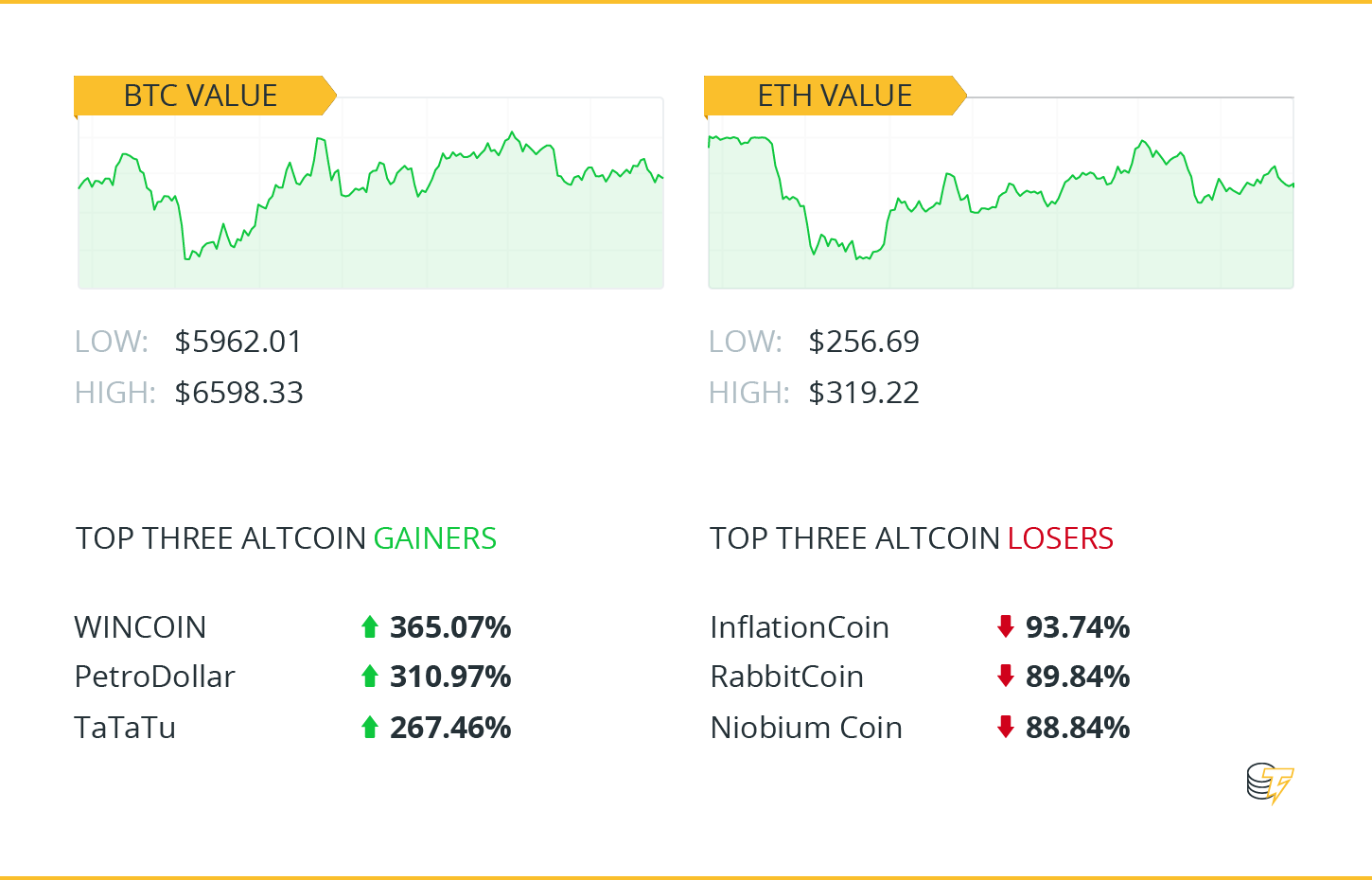 Total market cap is at around $213 billion after a week of ups and downs, with Bitcoin trading around $6,385 and Ethereum around $296.

The U.S. Securities and Exchange Commission (SEC) has intensified its probe into crypto mining firm Blockchain Riot, a former biotech firm that changed its name to contain the word “blockchain” last year. This week’s quarterly earnings report reveals that the firm received a letter from the SEC indicating that the agency had begun to focus on Riot Blockchain’s registration statements, with the possibility of issuing a stop order preventing shares of the company from being traded until the agency considers that deficiencies have been addressed.

U.S.-based graphics processing unit (GPU) manufacturer Nvidia stocks fell after announcing its third-quarter estimates, as the firm’s revenue was affected by a decrease in crypto mining as crypto markets have been falling. Nvidia shares declined more than five percent in the extended session. The company had reported that crypto mining sales were significantly lower than expected in Q2, adding that it does not expect to make significant blockchain-related sales for the rest of the year.

A recent report from Russia-based antivirus and cybersecurity firm Kaspersky Labs states that in the second quarter of 2018, cybercriminals stole over $2.3 million dollars via various crypto scams. The report lists “crypto giveaways” as one example of the scams involved, as well as those with cybercriminals posing as being part of new ICO projects to collect money from potential investors.

A group of researchers have reportedly hacked the Bitfi crypto wallet, which Bitfi’s executive chairman, cybersecurity pioneer John McAfee, has called “the world’s first unhackable device,” a claim backed up with a $100,000 bounty for breaching the device. This week, several researchers have written online that they could successfully send signed transactions with the wallet, claiming they met the conditions of the bounty program by modifying the device, connecting to the wallet’s server, and transmitting sensitive data with it.

Two artists address the current human rights issues around the world using the Ethereum blockchain to illustrate their examples. According to Weiwei, blockchain “is not about the technology, but an opportunity to set up a new system that could dismantle the old system, or at least offer a new possibility for communication.”