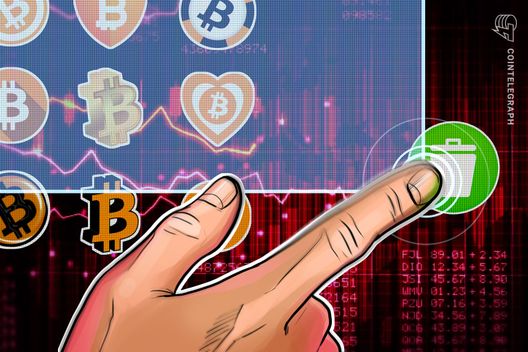 The SEC has made a u-turn on its rejection of a number of Bitcoin ETFs, suggesting the regulator is trying to find the balance between investor protection and blockchain development.

It’s been an interesting couple of days for a number of exchanges which were hoping to get the green light to launch various Bitcoin exchange-traded funds (ETFs).

The move denied the trio permission to move ahead with plans to launch their respective products. ProShares was looking to launch a pair of Bitcoin ETFs, Direxion had sought approval for five products while GraniteShares hoped to launch two offerings of their own.

However, the SEC made a U-turn on that original finding on August 23, putting out a statement that it would review its decision of all nine ETFs.

The regulator has not released a deadline for its review, but it means that these applicants may still be able to forge ahead with their ETFs.

The SEC provided the same grounds for rejection for each of the various ETFs. The main concern seems to be that the companies are not meeting the requirements to “prevent fraudulent and manipulative acts and practices.”

Furthermore, the regulatory body raised concerns about the size of the Bitcoin ETF market. Considering that it is a very small domain, there is unease that the exchanges won’t be able to ensure that there is no market manipulation.

“Among other things, the Exchange has offered no record evidence to demonstrate that Bitcoin futures markets are ‘markets of significant size.’ That failure is critical because <…> the Exchange has failed to establish that other means to prevent fraudulent and manipulative acts and practices will be sufficient, and therefore surveillance-sharing with a regulated market of significant size related to Bitcoin is necessary.”

It’s also important to note that the SEC made it clear that its original decision was in no way influenced by — or a reflection on — the value and use cases of Bitcoin and blockchain technology.

“[The agency] emphasizes that its disapproval does not rest on an evaluation of whether Bitcoin, or blockchain technology more generally, has utility or value as an innovation or an investment.”

Not all doom and gloom

Cointelegraph reached out to Anthony Pompliano, founder and partner at Morgan Creek Digital Assets, who addressed the topic in his Off The Chain newsletter this week.

Pompliano highlighted the main takeaways from the SEC’s judgement, which seems to have been fair, while also maintaining their focus on ensuring the safety of investors.

The ETFs in question differ somewhat from other offerings that have also been denied by the SEC. These nine ETFs are ‘derivative-backed,’ meaning the exchanges own futures contracts and not actual Bitcoin.

While the SEC will now review its latest rejection, Pompliano believes that the crypto industry will only see the launch of Bitcoin ETFs in 2019:

“The crypto industry will eventually get retail products approved by the SEC. The proper infrastructure and controls need to be in place first. This work will include implementing qualified custodianship, while preventing market manipulation. It is unlikely that regulators will be satisfied with any anti-market manipulation measures created during the remainder of this year. This would push the first ETF approval until 2019.”

As Pompliano suggests, there seems to be an infatuation with Bitcoin ETFs and the possibility of their issuance bringing better market sentiment for the cryptocurrency. However, these financial instruments could also have a negative effect on the stability of Bitcoin’s value, as Pompliano noted:

“In fact, an argument could be made that an ETF would simply give more people the opportunity to short Bitcoin, which would drive the price lower. Although this would be highly unlikely, we did see a significant increase in downward price pressures in the market with the introduction of Bitcoin futures roughly nine months ago. We’re living in an unpredictable market, so anything is possible.”

Cointelegraph also reached out to Cornell University associate professor Emin Gün Sirer, who had positive remarks in the wake of the SEC’s decision:

“The reasoning by the SEC is absolutely fair. The good news is that they are not saying anything negative about crypto as an asset class. In fact, they seem predisposed to accept it in the same category as every other asset, and they are applying the exact same standards as everything else. The problems they cite are not with the asset, but with the ecosystem that has been built around it.”

Gün Sirer believes that the main stumbling block lies at cryptocurrency exchanges, which are still plagued by problems like fraud and a lack of regulatory frameworks:

“The crypto community keeps hoping for a miracle, where the SEC suddenly has a lapse in judgment and reverses decades of its own practice, and keeps getting disappointed as a result. The SEC is patiently citing a small number of issues, all related to malfeasance or misbehavior at the exchanges. The crypto community has to learn to demand better, and evolve the ecosystem toward a higher standard.”

Until that happens, the Cornell University professor believes the SEC will continue to deny the approval of other ETFs.

Crypto analyst Brian Kelly reacted to the news positively in a segment on the CNBC Fast Money show, suggesting that the latest move points to an eventual approval of Bitcoin ETFs in February 2019. The barriers to entry, in his view, is the SEC’s ability to keep a close eye on trading and to identify fraud and manipulation.

Furthermore, Kelly says that the SEC believes that the Bitcoin futures markets are not yet mature — having only been around since December 2017:

“I think we’re incrementally closer to getting an ETF and a very positive thing was that Bitcoin didn’t sell-off. When a market, whether its Bitcoin or oil, doesn’t sell-off on the news that it should, that means there’s a sentiment change.”

While it’s unclear when the SEC will release a finding on the review of its decision on the latest ETFs, there is a lot to look forward to in September.

The SEC will deliver a ruling on Direxion’s proposed ETF on Sept. 21, while the deadline for another Bitcoin ETF proposed by financial services company SolidX and investment firm VanEck has been pushed back to Sept. 30.

It seems that the SEC is trying to give itself more time to make well-educated decisions when it comes to new exchange-traded products. This follows their announcement in July which denied the Winklevoss twins’ second application to launch a Bitcoin ETF.

The ruling had a big effect on the cryptocurrency markets, as values dropped across the board following the decision.

SEC commissioner Hester Peirce has been a staunch proponent of the approval of Bitcoin-backed ETFs. When the regulatory body denied the Winklevoss twins’ Bitcoin ETF for a second time, she publically dissented from the ruling.

In her statement, Peirce said the very creation of Bitcoin-related, exchange-traded products (ETP) would allow mainstream and institutional investors to gain exposure to the cryptocurrency in a regulated and more sheltered environment:

“An ETP based on Bitcoin would offer investors indirect exposure to Bitcoin through a product that trades on a regulated securities market and in a manner that eliminates some of the frictions and worries of buying and holding Bitcoin directly. If we were to approve the ETP at issue here, investors could choose whether to buy it or avoid it.”

SEC trying to get it right

While it seems like the SEC has taken a hard stance against exchanges applying to launch Bitcoin ETFs, it is worth taking a step back and looking at their overarching rhetoric on the topic.

This latest decision to review the findings of its own staff suggests that the regulatory body is performing a bit of a juggling act.

As SEC CEO Jay Clayton said in February, the organization would like to create an environment that encourages growth in the space while protecting investors from fraudulent practices and scams:

“Simply said, we should embrace the pursuit of technological advancement, as well as new and innovative techniques for capital raising, but not at the expense of the principles undermining our well-founded and proven approach to protecting investors and markets.”

Thus the very issues that the SEC is trying to address could well be answered through the use of cryptocurrencies and blockchain technology.

Conventional exchanges are kept in check by auditors and legal entities, which ensure that markets are protected from irregular or fraudulent behavior of exchanges. This is where Gün Sirer thinks blockchain tech and cryptocurrencies could revolutionize the space:

“Crypto assets are special and different. It’s possible for us to implement technical measures that can prohibit such malfeasance by construction. That is, crypto has the opportunity to not only meet, but exceed the standard to which the SEC holds Wall Street. We can lead the world here and lead every other asset class through judicious and careful use of technology, and facilitate the tokenization of conventional assets in the process. Of course, this requires a switch away from blind speculation in rigged markets, toward better technological developments. The sooner the crypto community gets behind a unified push to clean up exchanges and implement better, high-assurance decentralized exchanges, the sooner SEC-approved ETFs will become a reality.”

The SEC’s announcement that it would review its initial finding had a notable effect on the cryptocurrency markets, with Bitcoin rebounding after an slight pull-back following the original rejection on August 22.

It marks a week of volatility, which was also influenced by China’s latest crackdown on cryptocurrency-related events in certain parts of Beijing. Bitcoin was trading at around $6,790 at the time of publishing. 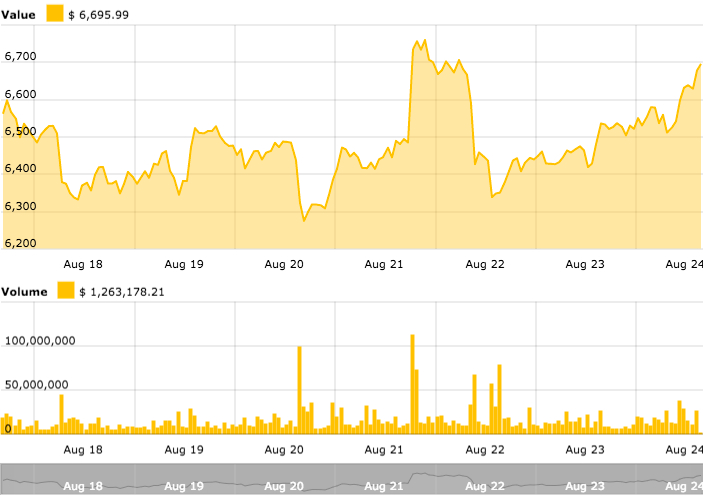