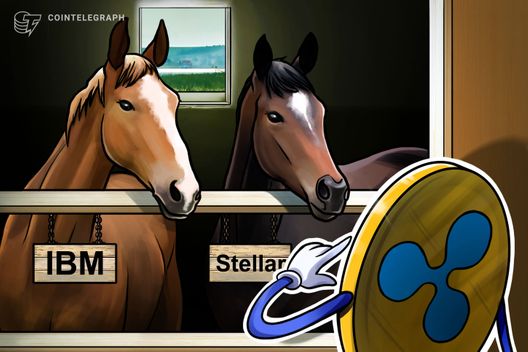 IBM and Stellar are rolling out an alternative to Ripple’s transaction solution.

Competition in the business of facilitating cross-border payments has just gotten tighter. Until recently, the primary fintech challenger to the reigning SWIFT international payment system has been Ripple Labs and its various products designed for the institutional banking sector. The first week of September saw the game-changing news break, as IBM announced promotion of its DLT-powered payment system, Blockchain World Wire (BWW), from beta to a ready-for-use product.

Operating on the Stellar blockchain, the new financial rail will provide an infrastructure for clearing and settling cross-border payments with finality “in near real-time,” at the same time reducing transaction costs by removing third-party intermediaries from the process. Pervasiveness of IBM-powered solutions in global finance — the company claims to be handling around 60 percent of the world’s transactional systems — provides BWW with a hefty launching pad, immediately propelling it to the top tier of the industry that is poised to grow to a size of $2 trillion by 2020.

IBM and Stellar were first spotted jointly developing cross-border financial solutions in October 2017, when they unveiled a plan to build a transaction infrastructure for the South Pacific region alongside KlickEx, a New Zealand-based payments network. The news of another high-profile deployment of the Stellar blockchain by IBM came this May, when Big Blue teamed up with Veridium Labs to help companies track their carbon emissions on a distributed ledger. Finally, in July, IBM announced the launch of Stronghold USD, a U.S. dollar-pegged stable coin run on the Stellar network, in a partnership with financial services provider Stronghold. The latter move was set to become consequential for the Blockchain World Wire system, which at that time was still in the works.

The mechanics of the new payment system are fairly straightforward and rely on the notion of a bridge asset — a carrier of value on the network that can be exchanged to any fiat currency on each side of a transaction. As two financial institutions negotiate a payment, they “agree to use a stable coin, central bank digital currency or other digital asset as the bridge asset between any two fiat currencies.” Although this formulation presents a range of bridge asset options, the timing of the Stronghold USD launch suggests that it is the stable coin that is designed to serve as a primary vehicle of Blockchain World Wire transactions.

IBM also stresses that the new financial rail is built to integrate seamlessly with existing payments systems through its API, so banks won’t have to implement sweeping hardware changes in order to start using it. Once the sender’s fiat currency is converted into a proxy digital asset, the system instantaneously turns it into the respective amount of the receiver’s fiat currency. All the transaction details and settlement instructions are then recorded on the distributed ledger.

In an apparent attempt to appeal to the widest possible array of institutional clients, IBM marketers cautiously specify in a footnote that “for those preferring to avoid the use of digital currencies, IBM also provides alternative settlement methods,” without defining, however, what those would be.

The importance of native tokens

Even before setting out to explore the territory that is usually considered within Ripple’s jurisdiction — transactional services for large corporate banks — Stellar was doomed to have all its achievements measured against those of its older sibling. Both Ripple and Stellar protocols are, to a significant extent, defined by the vision of one person — Stellar’s current CTO Jed McCaleb — and as such, share a lot of design features. Yet, unlike Ripple, Stellar is completely open-source and not beholden to a single corporate entity. While Ripple has long been seen mainly as a solution provider for banks, Stellar developed a reputation of being a payment network for individuals.

Ripple’s brisk ascent to the rank of the third largest crypto asset by market capitalization at the turn of last year has been largely predicated on a streak of successful pitches of its services to major financial institutions. The biggest deals that Ripple managed to secure included a foreign exchange service for Santander, as well as a payment app built for a consortium of 61 Japanese banks.

These big wins, however, come with an important caveat: both are based on a technology called xCurrent, which doesn’t make any use of XRP, Ripple’s native token. Meanwhile, the product that does rely on XRP, called xRapid, has been seeing more modest rates of adoption. Particularly, several major money transfer services, including Western Union and MoneyGram, announced earlier in the year that they would start testing xRapid-powered transactions. Several months later, Western Union CEO Hikmet Ersek said that the solution hadn’t delivered any significant reduction in transaction cost and was “still too expensive.” The disparity in xCurrent and xRapid’s performance has led some critics to conclude that XRP token doesn’t have any use.

Thus, bringing in a newly-minted stable coin to power cross-border transactions on the Stellar blockchain looks like a smart move from IBM and Stellar. In doing so, they will retain the ‘XRP for the people’ ethos that has developed around Stellar XLM token, and clearly demarcate the boundary between the corporate and community uses of the Stellar ledger. Of course, there are also more immediately practical considerations at play. Jesse Lund, the head of IBM’s blockchain department, noted in a blog post:

“Volatility and inherent risk means that most financial institutions are wary of using cryptocurrencies as the basis for mainstream commercial transactions and why some countries have banned their use entirely… The ‘stability’ of stable coins could translate into improving the entire backbone of international banking operations, giving banks an innovative way to significantly update their core banking and compliance infrastructure while also helping to improve operational efficiency and regulatory transparency.”

It remains to be seen if reliance on stable coins will grant Blockchain World Wire a sizeable competitive advantage over Ripple’s solutions. What already does look like a serious advantage, though, is IBM’s stalwart position as a major infrastructure provider for traditional transactional systems: The cost of convincing existing clients to adopt a new technology is by long odds smaller than acquiring new ones.

Judging from what is known about Blockchain World Wire at this point, the system’s design and functionality directly pit it against Ripple’s xRapid rail in the race for global banks’ good graces. Despite the dearth of information on how the two compare in terms of performance, it is possible to pinpoint a few more general product features that might prove relevant as BWW hits the market and the competition ramps up. In addition to the impressive base for adoption already mentioned above, IBM’s solution looks appealing for its versatility. Whereas xRapid utilizes only XRP token as a bridge asset, Blockchain World Wire boasts a range of options, which could potentially open the system up for many fruitful integrations and partnerships.

That said, it is not yet clear when financial institutions will be able to derive practical benefits from adopting IBM’s new product, as it hasn’t even been tested in the field. In contrast, xRapid has been out there for a while, undergoing tests with some of the key players of the money transfer industry for months now.

Also, it is worth noting that the market of cross-national, blockchain-powered financial services is far from a duopolistic arrangement divided solely between Ripple and BWW. In late June, Ant Financial, Alibaba’s financial arm, deployed a remittance solution on blockchain to facilitate transactions between Hong Kong and the Philippines. Meanwhile, Japanese tech giant GMO is equipping its new online banking service with a blockchain-powered transaction system. As some of these and other emerging platforms are likely to achieve a certain degree of regional dominance, on the global scale, years of stiff competition lie ahead.

Blockchain World Wire’s inaugural public presentation will take place in Sydney in late October. Symbolically, it is bound to happen at Sibos — an annual summit for global financial industry hosted by SWIFT.