Goldman Sachs Group Inc. is halting its plans to open a cryptocurrency trading desk, Business Insider reported this week, but will focus on a custody product for crypto, which will allow it to hold cryptocurrency on behalf of large clients and track its price. According to unnamed sources, the bank has lowered the priority of its crypto trading desk project due to the lack of regulatory clarity. It might take many steps before a regulated bank could trade digital assets, most of them outside Goldman Sachs’ control, sources reportedly reveal. Goldman’s CFO later suggested that the excitement over a potential trading desk may have been premature.

Tech giants Alibaba and IBM are vying for the top spot on a new list that ranks global entities by the number of blockchain-related patents filed to date, using consolidated data as of August 10 from across China, the EU, America, Japan and South Korea. The list also used information from the International Patent System from the World Intellectual Property Organization (WIPO). China’s Alibaba came in first place, having filed a total of 90 blockchain-related patent applications, whereas IBM has to date filed a total of 89.

The Google Cloud team has officially made the Ethereum (ETH) dataset available in BigQuery, the company’s big data warehouse for analytics, after having done the same for the Bitcoin blockchain in February. The Ethereum blockchain data is posted in the dataset and updated on a daily basis, with BigQuery’s OLAP features helping to aggregate such types of data and and visualize it. According to Google, the BigQuery ETH addition was created to help make business decisions, prioritize improvements to the Ethereum architecture itself (for example, to prepare updates), and balance sheet adjustment.

The Securities and Exchange Board of India (SEBI) has been organizing tours to countries including Japan, the UK, and Switzerland for their officials to study cryptocurrencies and Initial Coin Offerings (ICO). India’s regulator refers to the trips as “study tours,” noting that its officials have already gone to consult with Japan’s Financial Services Agency (FSA), the U.K. Financial Conduct Authority (FCA) and the Swiss Financial Market Supervisory Authority (FINMA). The regulator notes that the goal of the trips is to help officials “engage with the international regulators and gain deeper understanding of the systems and mechanisms.”

The Supreme Civil and Criminal Court of Greece has ruled to extradite alleged BTC-e owner Alexander Vinnik to Russia to face several cyber fraud charges, after the U.S., France, and Russia had previously argued over the location of Vinnik’s extradition. In July 2017, Greek police arrested Vinnick as the U.S. Department of Justice convicted him of fraud and money laundering around $4 billion worth amount of Bitcoin (BTC) and France charged Vinnik with “defraud[ing] over 100 people in six French cities between 2016 and 2018.” If extradited to Russia, Vinnick would reportedly face a fraud charge equal to 667,000 rubles (around $9,800).

“We have a new technology that disintermediates a lot of industries. That’s important, and that’s going to be something that’s here for the rest of my career at least and likely a lot longer than that,” — Brian Kelly, founder and CEO of digital currency investment firm BKCM LLC

“Before a government with obvious anti-south traction, which is strengthening the Lombard-Veneto axis … and is working to hijack most of the resources towards the rich, giving only alms to the south, we must launch an historic challenge, never thought nor implemented so far,” — Luigi de Magistris, the mayor of Naples on the need to launch an autonomous municipal cryptocurrency

The Philippines Securities and Exchange Commission (SEC) will be revealing its draft cryptocurrency regulation by the middle of this month. Local media confirmed cryptocurrency exchanges could soon be considered as traditional “trading platforms,” under the new framework. The Philippine SEC also revealed it had been working in tandem with the central bank, the Bangko Sentral ng Pilipinas (BSP), in order to establish what Amatong terms “cooperative oversight.”

China’s Supreme Court this week ruled that evidence authenticated with blockchain technology is binding in legal disputes. This new ruling comprises part of a series of more comprehensive rules that clarify litigation procedures for internet courts across China, and comes into force immediately. The ruling notes that “Internet courts” must recognized digital data if it is stored on a blockchain with “digital signatures, reliable timestamps and hash value verification or via a digital deposition platform.”

Tech giant IBM has released its Blockchain World Wire (BWW) payment network from beta this week. BWW, which uses digital currency on Stellar’s blockchain to facilitate international settlements between banks in “near real-time,” is the latest step forward for IBM and Stellar, which have been eyeing blockchain payment options since October last year.

The Los Angeles Dodgers, a U.S. professional baseball team, will hold a giveaway of crypto-based athlete tokens at the end of this month. The first 40,000 tickets fans in attendance at the San Diego Padres game on September 21 will receive a card with a unique code that can be unblocked and transferred to an Ethereum wallet, with each card containing tokens of such athletes as pitcher Clayton Kershaw, third baseman Justin Turner, and Curaçaoan pitcher Kenley Jansen.

Smart Valor, a Swiss blockchain startup, has gained approval this week from Switzerland’s Financial Services Standards Association (VQF) — rather than the national regulatory agency — to operate in the local financial market. Smart Valor, which plans to launch an online platform for alternative investments, including cryptocurrencies, in the fourth quarter of 2018, is also applying for a banking license.

South Korea’s SBI Savings Bank has signed an MoU with DAYLI Intelligence, a expert in AI and blockchain technology, to improve its fintech business. DAYLI Intelligence, which provides blockchain solutions and AI-based tech infrastructure for financial institutions, will reportedly assist SBI in implementing both blockchain and machine learning to maximize work efficiency and reduce costs across various financial products and services.

Intel And SAP Partner For Deeper Collaboration On Blockchain Technology

Intel and software multinational company SAP have announced a partnership intended to address “gaps in the market” for solutions that power enterprise blockchain systems. Intel and Sap, who have collaborated for 25-year on enterprise infrastructure platforms, have recently expanded their joint work to encompass blockchain technologies — spearheaded by the creation of a SAP-led global industry blockchain consortium — including the development of the SAP HANA Data Management System.

ENGIE, a French electric utility company, has partnered with consulting firm Maltem Consulting Group in order to create a blockchain development firm for commercial customers. The new Blockchain Studio, which received around $2.1 million in seed funding, will focus on the development of smart contracts and creating cloud- or server-based blockchain infrastructure.

Blockchain startup ConsenSys has partnered with online education platform Coursera to offer a blockchain technology course entitled “Blockchain: Foundations And Use Cases.” The course, which is designed to provide students an introduction to the technology and develop the skills needed to understand how blockchain is changing certain industries, is designed for students of varying skill levels, including individuals who lack a technical education. 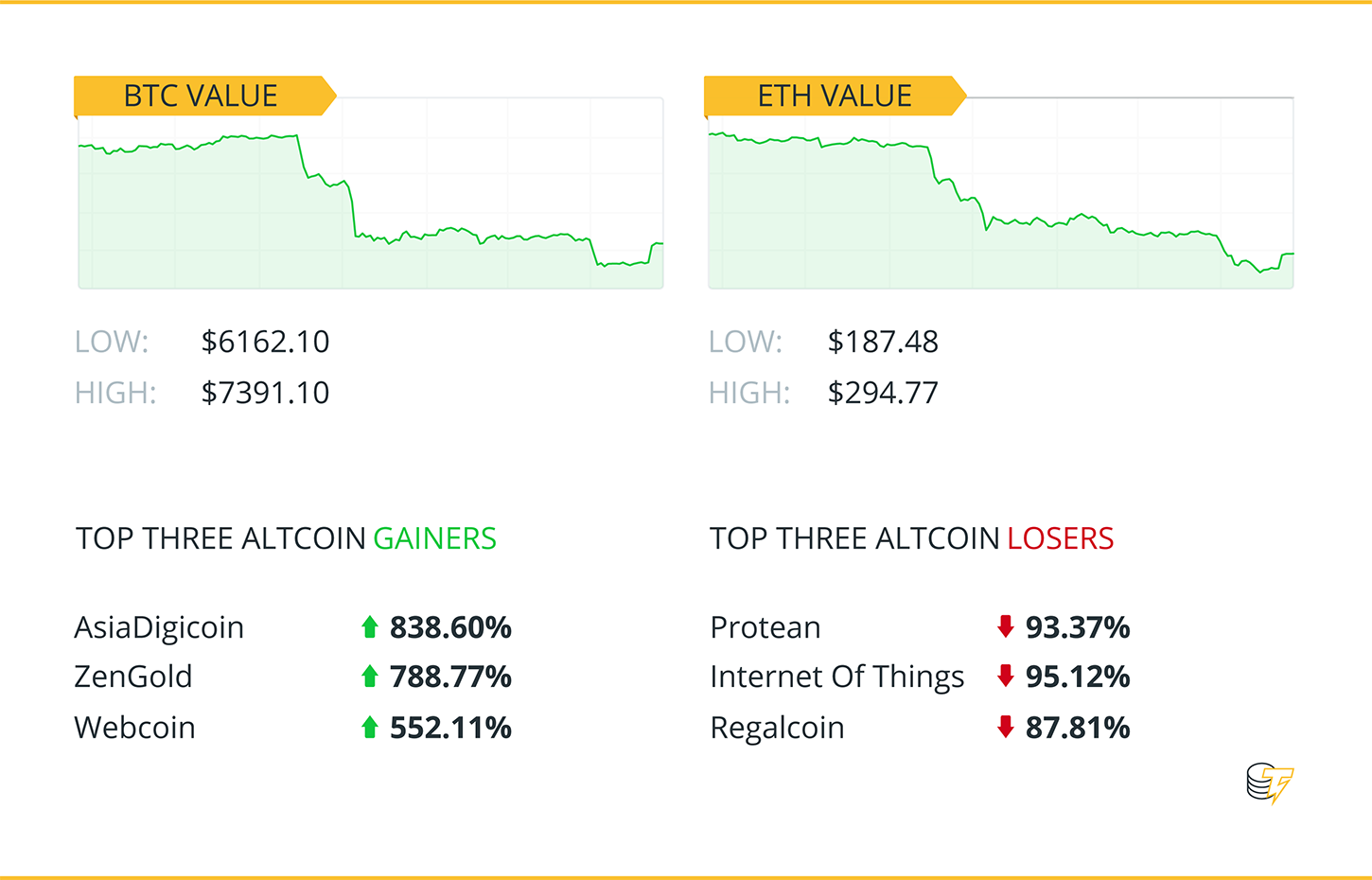 The crypto markets have suffered losses this week, with Bitcoin just below $6,400 and Ethereum inching towards $200. Total market cap is around $198 billion.

The MEGA Chrome extension version 3.39.4 has reportedly been compromised and can now steal user’s Monero in addition to other sensitive information, according to recent posts this week from various users on Twitter and Reddit. The extension, when working correctly, claims to improve browser performance by reducing page loading times, in addition to providing a secure cloud storage service.

Malaysia’s Securities Commission (SC) of Malaysia has ordered an immediate halt to all promotional activities for the recently-launched Lavidacoin (LVC) pending further review. Lavidacoin, created by Malaysian cosmetics mogul and beauty guru Datuk Seri Hasmiza Othman, aka Dato’ Vida, was reportedly meant to raise $1.5 billion in an ICO to create an “entrepreneur-focused” online entertainment channel, an LVC payment gateway, and even a “non-profit” mosque.

Crypto exchange Bittrex will delist Bitcoin Gold (BTG), a hard fork of Bitcoin (BTC), by September 14 following an $18 million hack of the BTG network in May. BTG reportedly suffered a combination double spending and 51 percent attack on several exchanges, including Bittrex. The Bitcoin Gold team has claimed that they are “is not responsible for security policy within private entities like Bittrex,” adding that the exchanges “must manage the related risks and are ultimately responsible for their own security.

Thailand’s Anti-Money Laundering Office (AMLO) has put forward the idea of creating its own digital wallet in order to investigate crypto-related cybercrime. According to Witthaya Neetitham, secretary for AMLO, the Thai watchdog wants to adapt to the new technology by making it possible for the government to confiscate crypto involved in fraud, as currently Thai officials can only jail or extradite those who were convicted of cybercrime or confiscate their physical assets.

Belgium’s Financial Services and Markets Authority (FSMA) has added 28 new sites to its crypto-related fraud blacklist, noting that it continues to receive complaints from consumers scammed by fraudsters despite previous warnings. The agency notes that the updated list is not comprehensive, and has been assembled largely as the result of victims’ reports, adding a request for any information about crypto-related scams in Belgium.

What happens when a remote British Columbian town that lost its paper mill — for all intents and purposes turning into a ghost town with a population of less than 100 — accepts the offer of an out-of-towner to come in and use their excess hydroelectric power to mine for Bitcoin? The answer? Not that much, currently, as Bitcoin mining facilities don’t bring in a large workforce, and the price of Bitcoin is lower than the mining facility was planned for.

Bitcoin’s Path to Method of Payment

Bitcoin developer Jimmy Song explains the multiple reasons that people want to use Bitcoin (which seems to be mainly as a store of value rather than a method of payment, according to Song), and what the evolution of Bitcoin may look like in the future (i.e. how can one make merchants want to keep Bitcoin a store of value?).