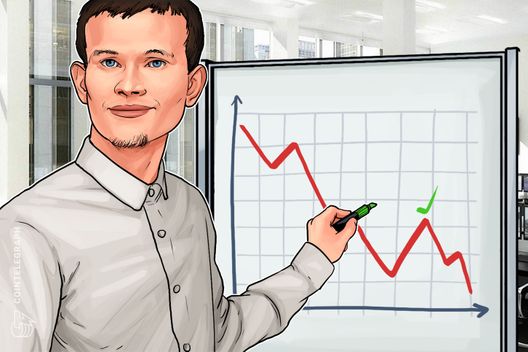 In an interview with Bloomberg, Vitalik Buterin claimed that the crypto and blockchain industry is “getting close to hitting a dead end.”

There is no chance that the cryptocurrency and blockchain space will see “1,000-times growth” again, Ethereum (ETH) co-founder Vitalik Buterin stated in an interview with Bloomberg September 8.

At an Ethereum and blockchain conference in Hong Kong, Buterin told Bloomberg that the rapid growth of crypto and blockchain industry is now reaching a “ceiling,” and is moving from “just people being interested” to the stage of “real applications of real economic activity.”

Buterin explained that the period of explosive growth in the sphere is likely coming to an end because the level of superficial awareness about the industry has significantly grown, and is likely to plateau:

“If you talk to the average educated person at this point, they probably have heard of blockchain at least once. There isn’t an opportunity for yet another 1,000-times growth in anything in the space anymore.”

According to Buterin, the initial strategy seen over the past six or seven years in the crypto community – based on marketing coins with the goal of widespread adoption – has resulted in massive growth price and market capitalization of many cryptocurrencies, but that it is now “getting close to hitting a dead end.”

However, while crypto markets have seen a significant decline in 2018, the current figures are still much more than those in the beginning of 2017, when total market capitalization stood at around $17-20 billion, and major cryptocurrencies such as Bitcoin (BTC) and Ethereum were mostly trading below $1,000 and $12, respectively.

In this regard, “Bitcoin Jesus” Roger Ver recently told Cointelegraph that the recent bear market “feels like the opposite of a crash,” since “BTC is up 58% for the last year, and 1048% for the last two years.”

In the bearish marketplace, various experts have suggested different scenarios for the dynamics of crypto prices at the end of 2018. In late August, Fundstrat’s Tom Lee claimed that the BTC “could end the year explosively higher,” citing a correlation between it and emerging markets and predicting that Bitcoin’s price could surge to as high as $25,000 this year.

In July, Alexis Ohanian, co-founder of both Reddit and VC firm Initialized Capital reiterated his stance that Bitcoin and Ethereum will be trading at $20,000 and $1,500 by the end of 2018, respectively.

Also in July, Julian Hosp, co-founder and president of crypto startup TenX claimed that he was still “quite confident” that Bitcoin can hit $60,000 in 2018.