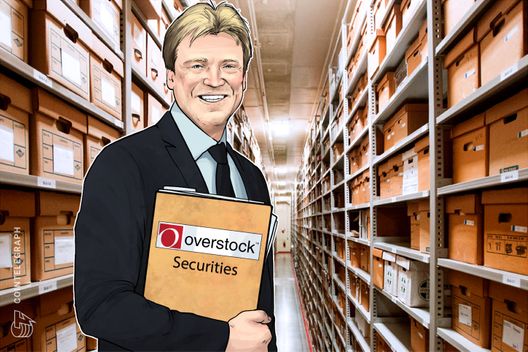 Overstock CEO Patrick Byrne has offloaded 10 percent of his stock, telling shareholders not to worry about it.

The CEO of Overstock, the first major retail company to accept Bitcoin (BTC) as a payment method, has sold 10 percent of his shares, CNBC reported September 11.

According to a form 4 SEC filing, Patrick Byrne sold around $15.8 million worth of shares as of Thursday and Friday, and then $4.9 million worth on Monday, totalling more than $20 million. The company’s share price subsequently fell 12 percent.

In an open letter to investors, which Byrne reportedly signed “your humble servant,” he pointed out several reasons for shareholders not to be concerned about his decision, saying “don’t worry, I’m still in the game, and we’re going to bring this House to its knees.” Byrne also noted that he is going to reinvest most of sold shares “next to you [investors]:”

“Within a matter of days, I will reinvest most of this money into two co-investments with Overstock and Medici Ventures (thus I am eating a double dose of my own cooking, as months ago I promised you I would).”

Venture capital firm Medici Ventures was established within Overstock in 2014 to use the company’s money to invest in blockchain projects.

Byrne also insinuated that he sold off stock in order to meet tax obligations, saying that he needed to “pay Uncle Sam his cut,” stressing “remember, I didn’t build this. Washington built this.” The CEO continued:

“I needed to sell stock during this quarter to meet such other obligations. I am disappointed that I when the deadline arrived for my sales this quarter, the stock had dropped (I sadly note that over the last 180 days the correlation between OSTK’s and Bitcoin’s daily movements has been 85.5%, and again warn people: we don’t have significant holdings of Bitcoin).”

Byrne also asserted that, over the course of 18 years at Overstock, he has “only ever sold a tiny sliver” of his stake and for most of those years he did not draw a salary. Byrne noted that for the last several months he drew “$100,000 so as to avoid being one of those schmucks who does not draw a salary.”

As an early advocate advocate for Bitcoin and blockchain technology, Byrne is apparently regarded as a pioneer of crypto in business. In 2014, Overstock became the first large stock company to accept BTC via a partnership with crypto exchange Coinbase.