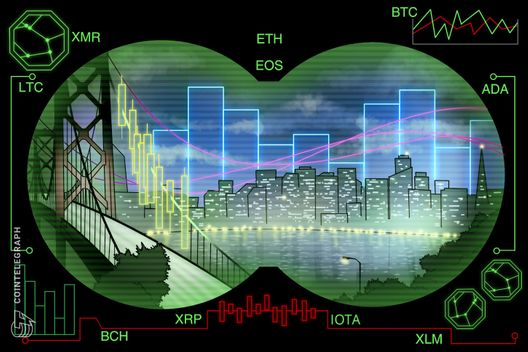 Financial regulators are watching companies involved in the cryptocurrency industry with increasing scrutiny.

On September 11, the U.S. Securities and Exchange Commission (SEC) penalized a crypto hedge fund for the first time, while the Financial Industry Regulatory Authority (FINRA) charged broker Timothy Ayre with securities fraud over a cryptocurrency deal.

These actions by the regulators will help rebuild the confidence of the institutional and retail investors in the crypto industry.

As the markets fall deeper into the bear territory, Bitcoin is emerging as the strongest cryptocurrency. It has steadily increased its dominance to about 58 percent of the total market capitalization, partly because the altcoins keep bleeding.

Over the course of 2018, the second and third largest cryptocurrencies by market cap have plunged 77 percent and 88 percent respectively, while Bitcoin has declined by about 55 percent, according to data from CoinMarketCap.

The price action of the next few days will determine whether Bitcoin will pull the altcoins higher or the altcoins will drag Bitcoin lower.

For the past three days, Bitcoin has been trading inside the intraday highs and lows formed on September 8. Failure of the bulls to secure a bounce from the critical supports is a negative sign. The moving averages are declining and the RSI is in the negative zone, which shows that the sellers have an upper hand.

The bears might attempt to break the $5,900–$6,075.04 support zone within the next 3–4 days. If successful, it will complete a head and shoulders pattern and a descending triangle pattern, which can trigger a number of stop losses, resulting in a quick fall to $5,450 and below that to $5,000. The pattern targets are, however, way lower.

If the bulls successfully defend the support zone and push price above $6,500, a move towards the downtrend line is probable, with minor resistances at the 20-day EMA and the 50-day SMA.

We might consider proposing a trade if we find that the BTC/USD pair is finding strong buying support after breaking out of $6,500. Until then, we suggest traders stay on the sidelines, waiting for the right opportunity to go long. Our bullish view will be invalidated if the price sustains below $5,900.

Ethereum is in a firm bear grip as it continues to make new 52-week lows on a regular basis. The RSI has entered deep oversold territory and the price is close to the line from where the cryptocurrency has bounced on four previous occasions. Hence, a pullback from close to the current levels is possible.

Any recovery will face resistance at the 20-day EMA and the downtrend line of the descending channel.

On the downside, if the ETH/USD pair breaks below the support line, it can slide to $136.12, a level last touched on July 16. We suggest traders wait for the decline to end and the digital currency to form a reversal pattern before attempting any long positions.

The downtrend remains intact. Both moving averages are trending down and the RSI is about to enter the oversold territory.

Any pullback will face a stiff resistance at $0.27 and above that at the moving averages. We shall turn positive on the XRP/USD pair only after it breaks out of the downtrend line. Until then, the traders can remain on the sidelines.

Bitcoin Cash has extended its journey southwards towards its first target objective of $400. If this support breaks, the next levels to watch on the downside are $300 and $282.

The BCH/USD pair will remain in a downtrend as long as it trades inside the descending channel. Any attempt to pull back will face a stiff resistance at the 20-day EMA and the 50-day SMA, which is close to the resistance line of the channel.

There are no signs of a reversal on the chart yet. We shall wait for the decline to end and a bottom formation to complete before proposing a trade on it.

On the upside, the virtual currency will show signs of a turnaround if the bulls sustain above the 50-day SMA for three days. The change in trend will pick up momentum above $6.8299.

Stellar has been trading close to the critical support of $0.184 for the past three days. The attempt to pull back on September 11 met with selling just above the 20-day EMA.

The down sloping moving averages and the RSI in the negative territory indicate that the path of the least resistance is to the downside. A breakdown of the $0.184 level will complete a descending triangle formation, accelerating the fall.

Litecoin is in a strong downtrend. It has made a new year-to-date low, breaking below the previous low established on August 14.

The next level to watch on the downside is the support zone of $40–$44. If this support also breaks down, the LTC/USD pair can plummet close to $30.

Any pullback will face resistance at the 20-day EMA, the downtrend line and the 50-day SMA. We shall turn positive on the virtual currency if it forms a reliable reversal pattern.

Cardano has picked up momentum on the downside, as it races towards its pattern target of $0.054541. Both moving averages are sloping down and the RSI has gone deep into the oversold territory. Prices are in the red for the sixth consecutive day.

The investors are liquidating their positions as the ADA/USD pair continues to plunge with no signs of a bottom. It is better to wait for the selling to run its course and for the buyers to return before initiating any long positions. Any pullback will face resistance at $0.083192 and the 20-day EMA.

Monero turned down from the moving averages after failing to break out of it from September 9–11. It is currently at the downtrend line, below which it can slide to $87.

The moving averages are gradually turning down and the RSI has dipped into the negative territory, which shows that the bears are in command. Therefore, we had suggested trailing the stops higher in the previous analysis.

Any recovery on the upside will face a stiff resistance at the moving averages and the trendline.

IOTA has turned down from the 20-day EMA and has broken below the September 9 lows, which increases the probability of a fall to $0.4628.

Below $0.4628, the IOTA/USD pair can fall to the August 14 low of $0.4037. Therefore, the traders can protect their long positions with the stops at $0.46. The trend is bearish as both moving averages are falling down and the RSI is in the negative territory.

The virtual currency will show signs of bottoming out if the bulls break out and sustain above $0.9150. Until then, every rise will invite selling.