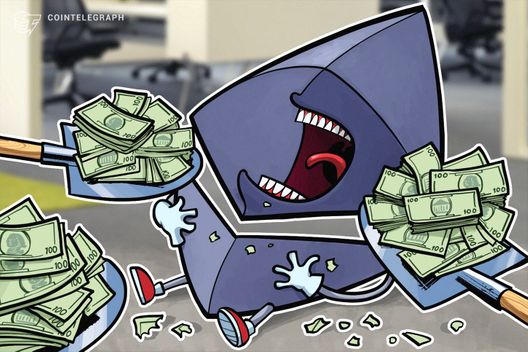 A TrustNodes study says that ICO projects sold 160,000 ETH in the past 10 days – three times the amount sold by ICOs in the month of August.

In the past 10 days, Initial Coin Offering (ICO) projects have sold three times more Ethereum (ETH) than they did in August, according to research by TrustNodes published September 13.

The 160,000 Ethereum tokens sold over the past few days amount to $33 million, according to the price index at press time. Per TrustNodes, ICO projects sold 82,000 ETH on September 4, which was followed by a sharp decline in crypto markets.

Average daily ETH sales from ICOs varied from 1,000 to 5,000 coins in August, with occasional sales around 10,000 ETH. In contrast, the same amount of 10,000 ETH became a far more common daily sales volume in September.

According to TrustNodes, the total amount of Ethereum sold by ICOs over the past 30 days now amounts to 283,000 ETH, which is almost $60 million at press time.

Citing crypto data provider Santiment, TrustNodes states that the highest share of ETH sales from ICOs is attributable to the Digix ICO project. Digix’s paper value Ethereum holdings amounted to $150,000 million, which is significantly higher than the current total market capitalization of DigixDAO coin, which is $69 million at press time, according to CoinMarketCap.

Earlier this week, Cointelegraph reported that funding for ICOs have seen its hardest decline in 16 months. In August, ICO startups raised $326 million, the smallest amount since May 2017.

Ethereum-based ICOs have been outlined as the main factor for the recent ETH price decline, as some projects withdraw their funds in order to cover costs amid concerns over a bearish market. Today, Ethereum skyrocketed almost 20 percent with an intraday high of $214.18, after plunging below $170 earlier this week, its lowest point in 2018.

Also today, Sonny Singh, the CCO of global crypto payment processor Bitpay, argued that altcoins “will never come back” to their previous levels. Singh said that institutions adding financial products like crypto ETFs will be the main drivers of a bullish trend in the market and they are “not going to launch altcoin products, they’re going to launch Bitcoin products.”