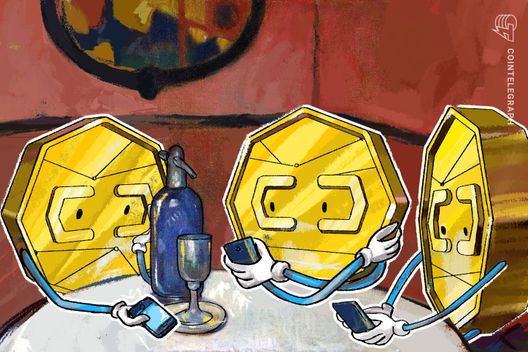 A judge has weighed in on cryptocurrencies falling under securities laws, and several new stablecoins are approved by New York regulators.

In an apparent first, a New York federal judge has ruled that U.S. securities laws are applicable for prosecuting crypto fraud allegations. During the fraud case against Brooklyn resident Maksim Zaslavskiy — who allegedly defrauded investors by promoting two cryptocurrencies reportedly backed by real estate and diamonds — U.S. District Judge Raymond Dearie ruled that federal securities laws could apply to the case. In Dearie’s words, federal securities laws should be interpreted “flexibly,” thus dismissing a motion from Zaslavskiy’s lawyers to drop the charges on the grounds that the cryptocurrencies didn’t fall under the Securities Exchange Act.

According to recent comments from Ethereum co-founder Vitalik Buterin, the growth and innovation of the crypto and blockchain spaces are reaching their plateau and will not see “1,000-times growth” again. This is not meant to be FUD, as Buterin explains that the time of hype is over and the stage of the “real applications of real economic activity” has been reached. After some backlash, Buterin then elaborated on Twitter that he does think there is still room for growth, just not 1,000 times more growth.

In a confusing series of events, OKEx founder and OKCoin CEO Star Xu was held by police in China for 24 hours after being reportedly accosted by a group of people in his hotel in regards to questioning regarding fraud allegations reportedly associated with OKEx. After being released, Xu said in an interview that the fraud charges were unfounded, noting that he cooperated with the police to clarify the claims that OKEx caused investors financial loss due to system crashes, noting that he is neither a shareholder or director at OKEx.

For the first time, both the SEC and FINRA this week charged companies related to cryptocurrencies with either defrauding investors or not conforming to securities laws. The SEC issued cease-and-desist orders to  Crypto Asset Management (CAM) and its founder Timothy Enneking, as well as “ICO superstore” TokenLot, claiming a misrepresentation as a registered company and failure to register respectively. FINRA filed a complaint against Timothy Tilton Ayre, charging him with securities fraud and the illegal distribution of an unregistered cryptocurrency, HempCoin.

Nalin Kotadiya, a Bharatiya Janata Party (BJP) official and former Member of the Legislative Assembly (MLA), has been remanded in custody for ten days in connection with a $1.3 million Bitcoin (BTC) extortion case. In April, the Criminal Investigation Department (CID) in India began investigating the reported kidnapping and extortion of 200 BTC from an Indian businessman and builder Sailesh Bhatt, with the case growing in complexity as Kotadiya’s name came up and it was revealed that several suspects were involved in Bitconnect in India. Authorities from two U.S. states have since asked the Criminal Investigation Department (CID) in India to seize the property of promoters of Bitcoin (BTC) investment firm BitConnect,

“If you talk to the average educated person at this point, they probably have heard of blockchain at least once. There isn’t an opportunity for yet another 1,000-times growth in anything in the space anymore,” — Vitalik Buterin, co-founder of Ethereum

“Markets like to retrace to the breakout..we retraced the whole of the bubble. #callingabottom,” — Mike Novogratz, CEO of Galaxy Digital

The United Arab Emirates (UAE) has approved a draft of regulations, which first gained approval from the Securities and Commodities Authority (SCA) in July, governing Initial Coin Offerings (ICO). Local media outlets now reports the agreement will enter into law upon its imminent publication in the UAE’s Official Gazette, an official periodical containing all the country’s legislation, with the specification that ICOs will be regulated and recognized as securities.

France’s Minister for the Economy and Finance has announced that the government has accepted an article of the Business Growth and Transformation bill (PACTE) dedicated to ICOs. The bill means that that the French stock markets regulator is now able to give licenses to companies that want to raise funds via an ICO, with the legislation aiming to help protect contributors’ interests. Finance Minister Bruno Le Maire stated in the announcement that he hopes the current legal framework for ICOs in France will “attract investors from all over the world.”

The Gemini dollar, of the Winklevoss twins’ crypto trading platform Gemini, now has the backing of the New York Department of Financial Services (NYDFS), alongside Blockchain trust company Paxos’s U.S.-dollar backed stablecoin. The brothers’ Medium post describes the coins being backed by U.S. dollars that are “held at a bank located in the United States and eligible for FDIC ‘pass-through’ deposit insurance, subject to applicable limitations,” while for Paxos, investors’ dollar deposits will be held “in segregated accounts at multiple FDIC-insured U.S.-domiciled banks.”

Canada’s “first” and “only” regulated Bitcoin (BTC) fund, First Block Capital Inc., has obtained mutual fund trust status, meaning that investors in its flagship product the FBC Bitcoin Trust — available for accredited investors only — can now put their holdings in such accounts as a Registered Retirement Savings Plan (RRSP) and a Tax-Free Savings Account (TFSA). In essence, this allows accredited investors to deposit their fund units into accounts which provide substantial tax benefits for retirement and savings purposes.

Nasdaq, the New York-headquartered stock market giant Nasdaq, is exploring the addition of crypto datasets to its market analytics tool. Nasdaq’s Head of Alternative Data Bill Dague said in an email to Cointelegraph that “given [an] abundance of interest, we are exploring cryptocurrency related datasets. Whether or not we launch a crypto-related product remains to be seen.” The crypto datasets would potentially be integrated into Nasdaq’s data Analytics Hub, which launched in 2017 with the aim to make unstructured data more intelligible for the benefit of investors.

A group of U.S.-based blockchain and crypto companies have announced they will form the Blockchain Association, the “first” lobbying group representing the blockchain industry in Washington D.C. Called the Blockchain Association, the group is made up of industry leaders such as crypto exchange Coinbase, technology startup Protocol Labs, as well as the Digital Currency Group and Polychain Capital. The organization plans to represent mainstream companies that look to operate within the political system, primarily addressing policy issues and the treatment of cryptocurrency by U.S. tax law, as well as AML and KYC development.

An anonymous source told Bloomberg this week that U.S. banking giant Morgan Stanley is planning to offer clients Bitcoin trade swaps. According to sources “familiar with the matter,” Morgan Stanley will “will deal in contracts that give investors synthetic exposure to the performance of Bitcoin […] Investors will be able to go long or short using the so-called price return swaps, and Morgan Stanley will charge a spread for each transaction.”

The Malta Stock Exchange’s fintech and digital asset subsidiary, MSX PLC, has signed a Memorandum of Understanding (MOU) with crypto exchange Binance to jointly launch a new security token digital exchange in the country. Binance CEO CZ had said in an exclusive CT interview that the exchange had opened a bank account on the island, with company representatives subsequently hinted at the exchange’s plans to open a Malta-based platform.

The Korea Customs Service has signed an agreement with Samsung SDS to deploy blockchain technology for its customs clearance system. The IT arm of Samsung plans to develop a blockchain-powered platform based on Nexledger, which will be used for export customs logistics services. Along with the Korea Customs Service, forty-eight different organizations, including public agencies, shipping, and insurance companies have also entered the agreement.

The U.S.-based venture capital firm Ribbit Capital, the portfolio of which includes notable cryptocurrency and blockchain projects, is aiming to raise $420 million for its latest fund. According to Ribbit, the $420 million figure is a “nominal increase” from the $300 million the company attracted last year. Ribbit Capital has also previously invested in Andreessen Horowitz, Battery Ventures, and Cross River Bank. 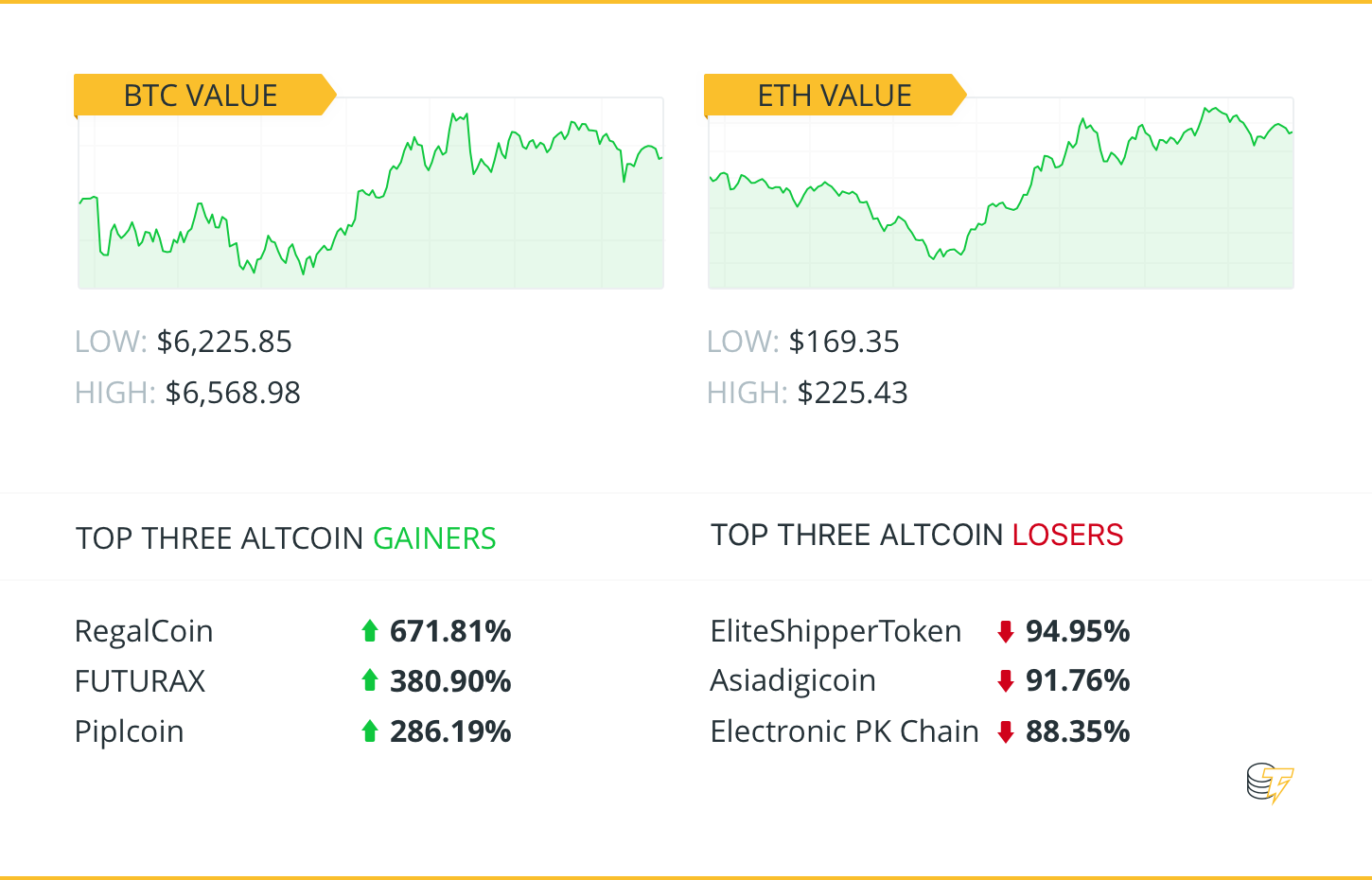 The crypto markets have seen a more positive week, with Bitcoin back to $6,519 and Ethereum also over the $200 mark, trading at around $219. Total market cap is at around $202 billion.

Homero Joshua Garza, the CEO of the now-defunct U.S. crypto firm GAW Miners, has been sentenced to 21 months in prison for defrauding investors with the creation and sale of a scamcoin dubbed PayCoin (XPY). Garza will also need to repay a $9.2 million restitution to investors. Founded in 2014, GAW Miners was a firm that specialized in the special hardware for crypto mining, but was shut down in 2015 following allegations of operating as a Ponzi scheme, which was followed by a lawsuit in 2016.

WeChat, the 1 billion-user Chinese social media platform developed by Tencent, has blocked BTC mining firm Bitmain’s official sales channel this week, along with other channels that were promoting “crypto hype.” According to the Bitmain official sales channel, a rule violation notice reads that “[WeChat] has reviewed and discovered that this account — without having acquired authorized credentials or licenses — has been publishing and distributing information of relevant businesses it is involved in.” As of press time, Bitmain’s other Wechat accounts, including after-sales services and its official account, remain active.

Berkeley’s Professor of Economics Barry Eichengreen has claimed stablecoins are a “myth” in a new critique published this week. In Eichengreen’s opinion, stablecoins, including Tether, are not automatically “viable” just because they are pegged to reserves of, for example, fiat currency. For Tether as an example, the “disputed” claim its tokens are fully collateralized combines with the “expense” of its issuance and circulation to raise questions about scalability.

A new study by the Oak Ridge Institute for Science and Education has found that the stability of digital currencies is threatened by “hard fork” software updates. According to lead researcher Benjamin Trump, digital currencies can potentially change commerce and information exchange on a global scale due to blockchain technology, but clear guidelines for hard forks are needed for in order to stabilize cryptocurrencies.

Tim Draper, a venture capitalist, predicted at the DealStreetAsia PE-VE Summit in Singapore that the total cryptocurrency market capitalization will hit $80 trillion in the next 15 years. According to Draper, the recent drop in the crypto markets is due to people the people who have not adopted digital currencies as a new asset class, and once more people become familiar with the tech, it can transform international industry.

Gav Would, an Ethereum co-founder and the person who originally coined the term “Web 3.0,” discusses the reasons why society needs to strive for the adoption of the principles of Web 3.0. In Would’s world, centralization is “not socially tenable long-term, and government is too clumsy to fix things.” If society rejects Web 3.0 in the future, then according to Would, the world “runs the risk of continued corruption and eventual failure, just as medieval feudal systems and Soviet-style communism proved untenable in a world of modern democracies.”

As You Mourn Lehman, Spare a Thought for Crypto

Ten years after the the collapse of Lehman Brothers, Bloomberg looks at what has happened with the cryptocurrency industry, attempting to conduct a partial “reckoning of where all the money in crypto as gone.” In Bloomberg’s words — “something as died.”