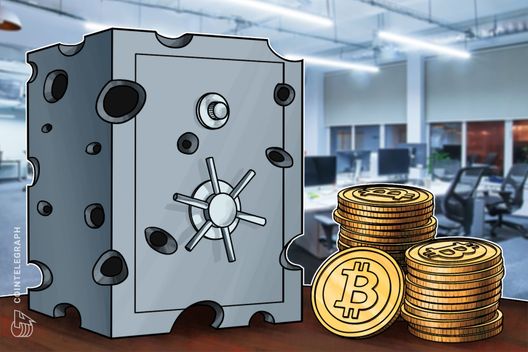 The world’s biggest exchanges have revealed security flaws, according to a new report from ICORating.

Coinbase Pro topped the ratings of a new report from ICORating into cryptocurrency exchange security Wednesday, October 3, while researchers flag multiple shortcomings that continue to plague the sector. ICORating conducts analytical research in the crypto space in its role as an independent rating agency.

The report rates one hundred exchanges whose daily trade volume is over $1 million on various criteria relating to security models, including end user protection and robustness of code.

Many of the world’s highest ranked crypto exchanges by trade volume — such as Bitfinex, Bitstamp and Binance — scored relatively poorly, with Binance’s total coming in at 63/100 and Bitstamp at 37/100.

“Over the past 8 years about 31 crypto exchanges have been hacked and more than a 1 billion dollars (actually, $1.3 bn) stolen,” the report summarizes.

32 percent of the ranked exchanges, according to the report, have code errors that could impact user experience and “lea[d] to certain defects in operations.”

In terms of user account security, 41 percent of exchanges allow “simple” passwords of fewer than eight characters, contrasting with the three percent statistic relating to those which do not support two-factor authentication.

Web security performance was found to be worse, with the majority of exchanges failing registrar and domain security, as well as web protocol security, in some way.

“Still nobody is fully protected from the loss of their crypto assets, therefore, invest in reliable assets, diversify your portfolio and choose good crypto exchanges,” the report advises.

As Cointelegraph reported, Coinbase, which scored 89 in the report, had filed a patent in August relating to boosting security of Bitcoin (BTC) payments.