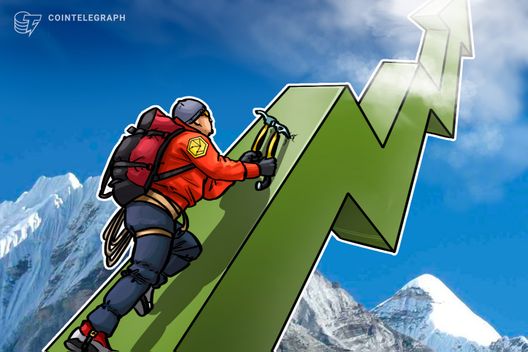 Crypto markets are seeing a mix of red and green, with 10 out of top 20 coins by market cap growing by less than 2 percent each.

Saturday, Oct. 13: crypto markets are seeing mixed price movements, as half of the top 20 coins by market cap have grown on the day.

The overall market is relatively stable, with two major cryptocurrencies Bitcoin (BTC) and Ethereum (ETH) seeing changes in value of under 1 percent. 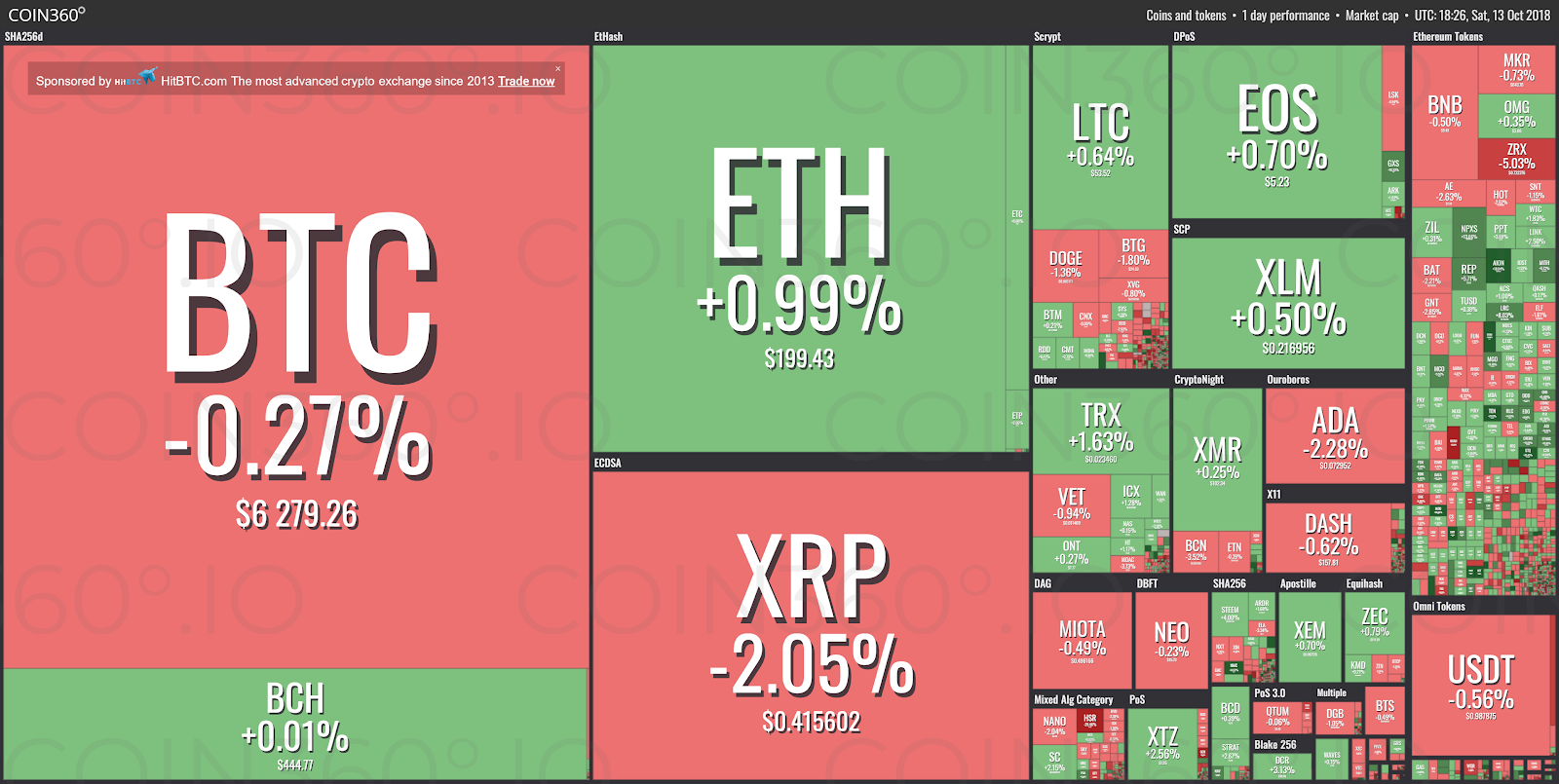 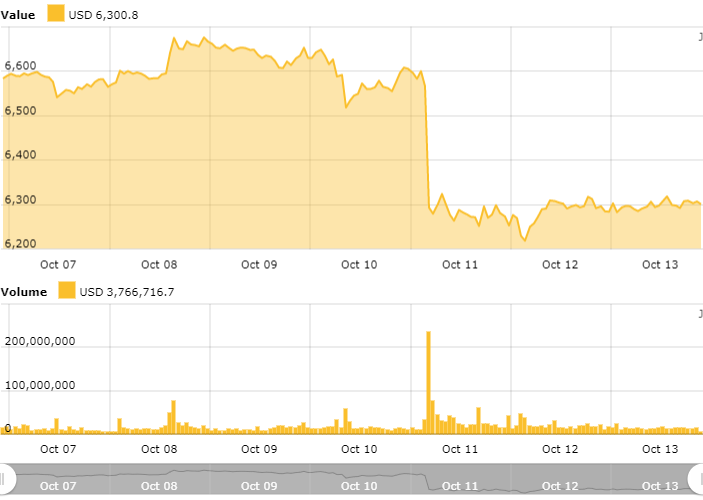 Ethereum has fared better over the day, seeing growth of almost 1 percent, to trade at $199. The cryptocurrency has recovered slightly, following a drop to as low as $191 on Oct. 11, according to Cointelegraph Ethereum Price Index. 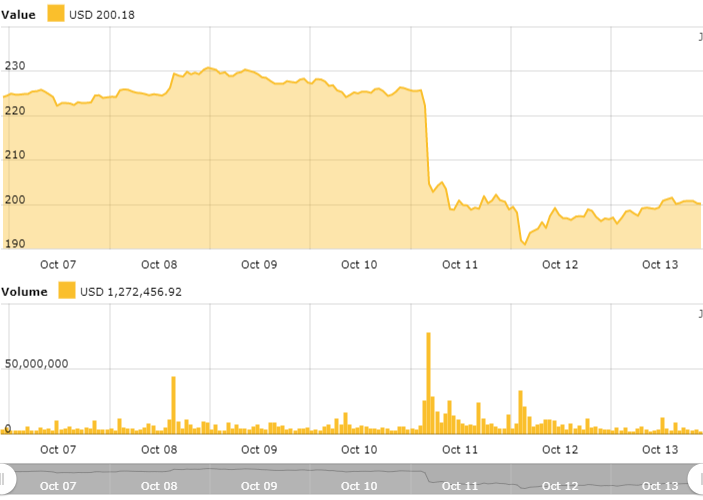 In contrast, Ripple (XRP) has taken a downturn over the past 24 hours. After experiencing significant growth yesterday, Ripple has dropped by around 2 percent on the day, and is now trading at $0.42. The third largest cryptocurrency by market cap is still up 50 percent over the past 30 days, due to a price surge on Sept. 20. 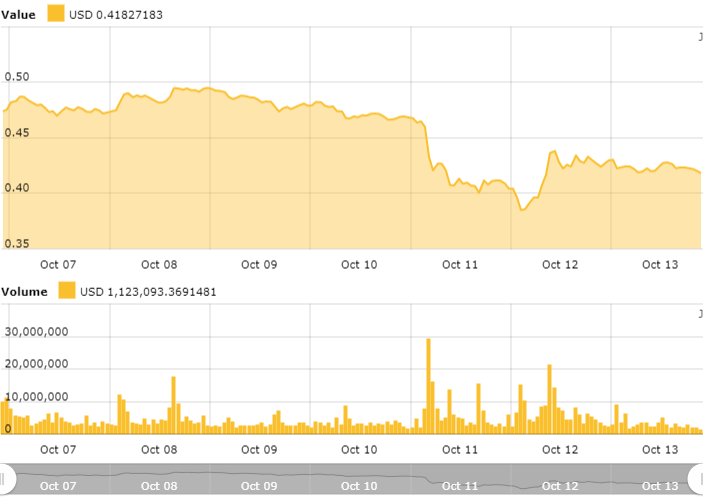 Daily trade volume of the entire crypto market has recently dropped below $10 billion for the first time since Aug. 26, when Bitcoin was trading above $6,700, and Ethereum was above $270.

TRON (TRX), the eleventh largest cryptocurrency by market cap, is seeing some of the largest gains on the day, according to CoinMarketCap. Following a recent announcement of a partnership with a unnamed “industry giant” that is valued at “tens of billions of dollars,” TRX is up around 1.4 percent over the day, to trade at $0.023 at press time.

Earlier today, Cointelegraph wrote about an unconfirmed report that TRON has actually partnered with a Chinese Internet giant Baidu.

American economist Nouriel Roubini testified before the U.S. Congress with a speech “debunking” crypto on Oct. 11. Also known as Dr. Doom for predicting the 2008 economic crisis, Roubini has followed up with yet another anti-crypto tweet, claiming that the idea of crypto is “fascist at core” due to “paranoia & conspiracy” about centralization.

Responding to Roubini’s statement, crypto commenter WhalePanda has called the economist’s tweet “the dumbest thing you will read on the internet today.”

Crypto analyst and host of CNBC’s Crypto Trader show Ran Neu-Ner has tweeted a poll, asking his audience who should debate Roubini. As of press time, the winning candidate is Ethereum’s co-founder Vitalik Buterin, with 33 percent of the audience casting their vote for him.