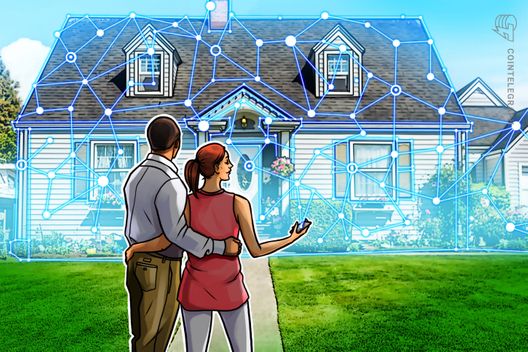 The global residential mortgage market is estimated to be worth $31 trillion. 66 percent of all Americans have a mortgage on their house while in the UK and China it’s as high as 70%. It’s a segment of the financial markets that hits close to home for a large portion of the global population.

The average mortgage closing costs would typically vary between 2 and 5 percent of the price of the property, including broker fees, loan origination fees, underwriting fees, surveyor fees, legal fees, and title fees. That means on a house of $250,000, the buyer can expect to pay anything between $5,000 and $12,500 just to obtain a mortgage.

The mortgage process is heavily centralized and permeated with middlemen who each add their own markup to the overall costs, a perfect target for blockchain. According to a PWC report:

“Blockchain technology may radically alter the process through which consumers buy a home, as well as the way financial institutions handle mortgages. Specifically, the technology could remove cost and friction from the process, create transaction records that are infallible and incorruptible, and facilitate near-instantaneous settlement.”

Moody’s suggests that the annual cost-savings as a result of blockchain-based application processes could be as high as $1.7 billion and ex-Barclays boss, Antony Jenkins, believes the time savings could be equally significant:

But how realistic are these claims and exactly where would the blockchain impact be?

The current mortgage application process is heavily paper-based, labour intensive, time-consuming, and expensive. This is in most part due to a long line of 3rd party service providers that all have an input into the process, such as surveyors, solicitors, credit agencies, and title deed offices.

When a buyer and seller agree to transact on a property, the buyer will apply for a mortgage from their bank, which includes providing several items of documentation such as bank statements, proof of income, existing loan information (if applicable), and consent for a credit report to be compiled by an external credit reporting company.

To determine an estimated loan amount, the bank would also approach a surveyor to conduct a preliminary property evaluation, after which it can start the credit approval process based on the information obtained from the buyer and the various 3rd parties.

Next, the bank would confirm the property ownership with land registry offices as stated by the seller. A final property valuation will then be requested from a surveyor so that it can be cross checked with the approved amount of credit.

The bank can then notify the buyer and solicitors of its decision, after which arrangements are made for the signing of the mortgage loan agreement and mortgage deed. Once the documents are signed, the bank can initiate the drawdown of funds and land registry offices can be informed to update title deeds. In the US, this application process can take anywhere from 30 to 60 days to complete.

Bottlenecks in the mortgage application process

Current transaction flows require third-party input from credit agencies to help assess loan eligibility, underwriters to calculate and ensure the accuracy of mortgage drawdowns, surveyors to provide up to date property valuations, lawyers to draw up legal documentation, and title offices to confirm and update ownership.

Each of these functions is likely to have a large team of administration staff to deal with the physical paperwork. In 2015, PWC reported that “the average mortgage application includes 500 pages, a number that has trended up rather than down in recent years”. Although other reports suggest it could be as much as 2,000 pages.

Every intermediary the transaction goes through will add 1% to 2% of the property’s value in their own fees to the overall cost. But it’s not only fees they add, each of them also adds additional days of their own processing time, leading to a long, drawn-out process.

Finally, there’s the lack of transparency over the required application documentation. Bank accounts, title deeds, and government records are held by separate institutions. When a person applies for a mortgage, brokers, credit agencies, bank personnel and other 3rd party agents will need access to this information in order to determine if a loan should be approved. Access is usually provided through manual processes, like sending an email request and then receiving the information by email a few days later.

Once a mortgage is approved, this same information needs to be updated with every agency, i.e. the title deeds need to show that the property has changed hands, the bank will now keep a record of the mortgage against your name so credit agencies can access this in case of future loan applications.

This is again done manually and every time information is passed along, it moves from one ledger to another. This not only requires additional third-party agents to confirm these transactions but it means this paper-based, mostly manual, process is prone to human error, leading to further delays and cost accumulation.

How can blockchain be applied to the mortgage process?

To approve a line of credit, banks rely on accurate information from surveyors, law firms, credit agencies, etc. If all of the required information is securely stored on a distributed network with each agent updating their part of the information, banks can easily retrieve the various pieces of information they need from this network, without having to rely on individual, paper-based communications to each of the 3rd party providers. This includes digitized copies of legal documents, property valuations, and title deeds.

Blockchain can be used to create a digital ID for each property, therefore making the property traсkable on the network. Apart from making the real estate market more liquid, purely from a mortgage application perspective, this digital ID would include a chain of ownership and current market valuation that will allow banks to quickly verify the current ownership status or confirm the market price, potentially mitigating the need of going through title deeds and engaging with surveyors.

DLT could also take it a step further and remove the need for certain intermediaries through smart contract application. Smart contracts can be pre-programmed to only execute upon completion of certain conditions, such as requesting funds to be released to the seller only once the mortgage documentation has been digitally signed, the borrowing bank has approved the mortgage and funds have been transferred to the seller’s bank.

The result is that certain roles of costly lawyers in the mortgage application chain could be made redundant. Synechron, a digital business consulting & technology services provider, estimates that these cost savings as a result of removing intermediaries will easily go into the billions:

“By automating and securing the mortgage lending processes, a blockchain-based system coordinates and identifies the agents and intermediaries and could reduce operational costs, fees, and fraud for financial institutions. We estimate savings of $177 million on a loan book of $97.7 billion for a typical mortgage lender.”

The consultants also believe the application approval time can be significantly reduced:

The Chinese State bank, Bank of Communications, used Blockchain to issue digital mortgages worth $1.3 Billion in September of 2018, while the world’s fourth-largest bank, The Agricultural Bank of China issued a loan worth around $300,000 for agricultural land on a blockchain network.

Similarly, in Russia, a subsidiary of the Raiffeisen Bank International issued an entirely digital mortgage through a blockchain platform called Masterchain, an Ethereum-based platform launched by the Bank of Russia that ensures fast and secure communication between banks and other financial institutions, and allows users to quickly confirm the accuracy of customer data.

The complete mortgage document was published in a DDS (decentralized depository system) built on Masterchain, which was then verified by an electronic signature and sent to the state property registry to be checked. After all the documents were checked and signed, a Mortgage Token was issued that went into file storage with the Bank.

“In the past, banks and [real estate] appraisers had to exchange faxes and emails to produce and deliver physical certificates. Now the process can be done on blockchain in seconds.”

There are also a number of startups that are using blockchain to streamline the mortgage application process.

“The application programming interface we have delivers a superior set of data and also regularly updates it, so we can give any institution an up-to-date, accurate view of their home-loan portfolio within 30 seconds.”

Block66 is another startup that wants to use the technology to increase transparency, streamline the deployment of capital, and overcome geographical lending restrictions. The aim for them is to create a marketplace of pre-vetted borrowers which lenders can then access. According to Block66 CEO, Joe Markham, their platform is developing a new breed of mortgage lending platform:

“Our Blockchain platform will store government regulations, internal guidelines provided by lenders, and information on applicants and their property obtained directly from the source.”

Other startups include Homelend, which uses blockchain to crowdfund mortgages through a peer-to-peer platform, and the Viva Network, that uses a similar concept.

Information security and legal frameworks might be challenges to overcome

The main challenge is that a lot of personal and sensitive information would be stored on a blockchain-based mortgage network. Although the inherent security of blockchain is robust, there could be several third-party agents plugging into the network which could create weak points. Information security should, therefore, be a top priority and a lot of work has to be done to ensure the online security of customer data.

Finally, the work with regulators and comply with legal frameworks in the various jurisdictions will be another challenge to overcome if we truly want to see blockchain-based mortgages going mainstream.

What Clayton means is that certain regulations and laws apply to a mortgage transaction, irrespective if that mortgage is issued through traditional channels or on top of a blockchain network. Regulators will need oversight into the details such as title transfers, electronic signatures, etc. There’s also the question of whether or not smart contracts are actually legally binding, and again, more work and research will have to be done to determine if such a concept is covered in existing legislature or if countries would have to write new laws to cover blockchain and smart contract transactions.

Mortgage lending is not something that only affects a niche segment of a population. The majority of people will go through a mortgage application process at some time. Equally, it’s a process that is expensive and time-consuming, fraught with complications, friction, and opaqueness.

A lot of interest, combined with significant room for improvement means we are likely to see investment and use cases increase significantly in the future. And the fact that it’s also not a process that is looking to remove traditional lenders, but rather enhance their systems, should further fuel investment and development. According to Eric Piscini, principal, banking and technology consulting at Deloitte, this might very well be the case:

“I don’t know if this is removing banks from the process — I think it will make them more efficient. Maybe they’ll be leaner because they won’t need to have as many people as they used to, to manage those processes.”

The fact remains that blockchain has the potential to revolutionize the mortgage industry and it is a use case that will benefit both parties at either side of the transaction, i.e. the customer and the financial institutions.