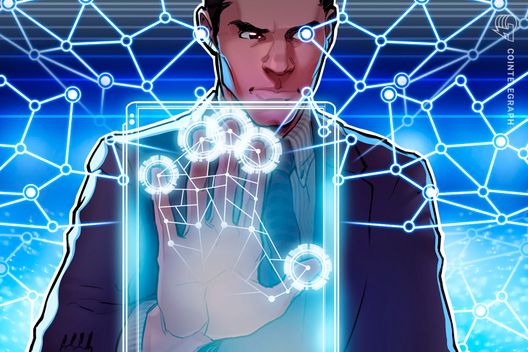 The value of blockchain technology in leading markets has grown rapidly over the past 12 months.

Many startups, major conglomerates, supply chain operators, and distributors have attempted to integrate blockchain technology over the past two years, to increase transparency and reduce the power of central entities in data processing.

With billions of dollars being invested annually by major corporations in blockchain development, the emerging technology has become the focal point of the long-term vision of many companies internationally.

The exponential increase in demand and interest in blockchain technology has enabled multi-billion dollar markets for the blockchain in major sectors including manufacturing, agriculture, retail, supply chain, IoT, and payments. 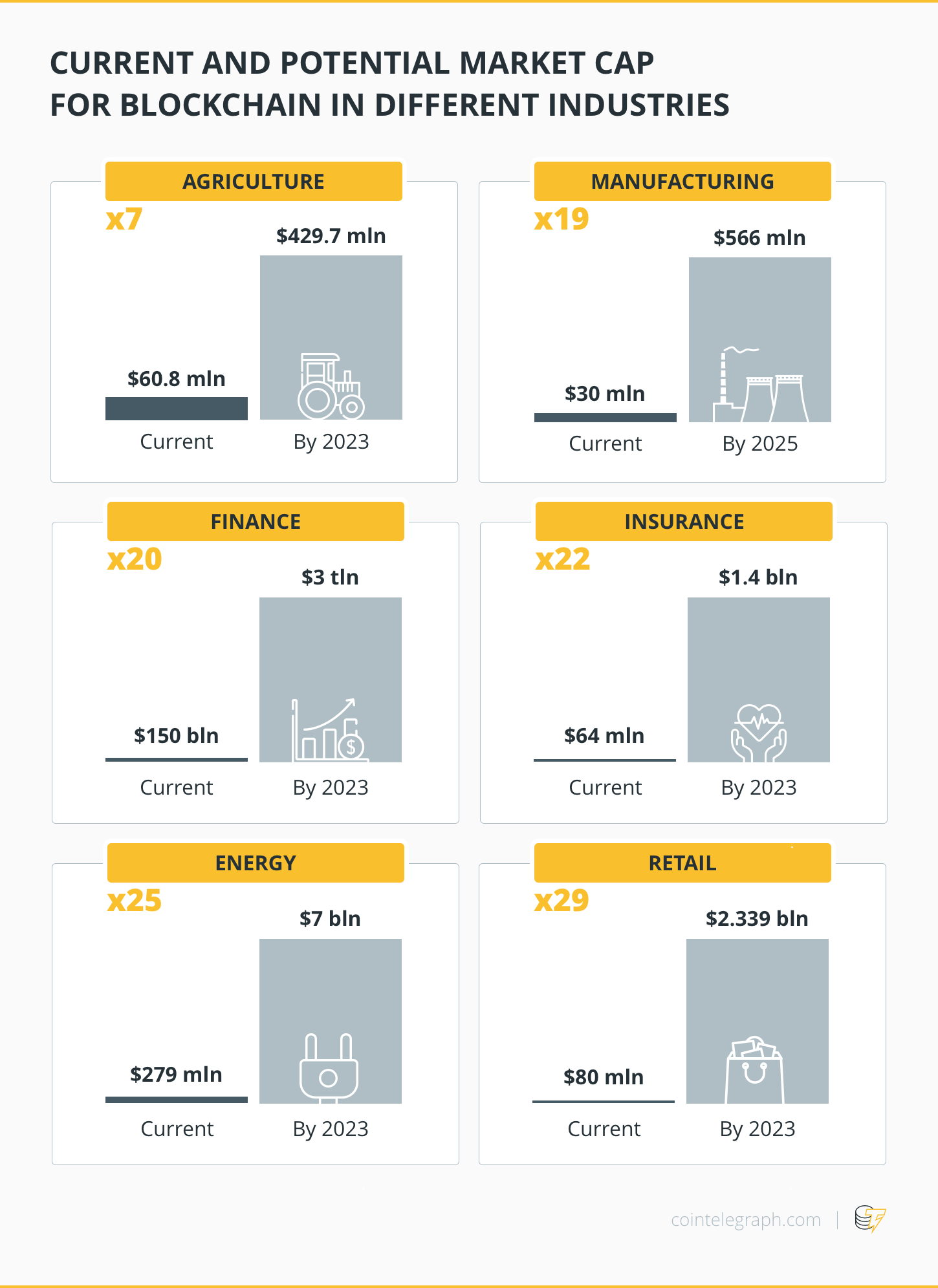 Blockchain in manufacturing to be $566 million by 2025

On October 4, technology research firm ReportLinker disclosed in a research paper that the market for blockchain technology in the US manufacturing sector is expected to grow to $566 million by 2025, within the next seven years.

The researchers stated that the blockchain in manufacturing market is forecasted to be worth around $30 million by 2020, and the market will continue to grow at an annual growth rate of 80 percent, to $566 million by 2025.

While the report cited the increase in demand for blockchain-as-a-service (Baas) provided by technology conglomerates such as Microsoft and Intel as a major catalyst for the growth of the blockchain in manufacturing market, it cautiously suggested that the lack of regulatory clarity in the U.S. could limit the growth of the market.

Similarly, PricewaterhouseCoopers (PwC), a Big Four auditor, expressed its concerns in regards to regulatory uncertainty in the blockchain sector of the U.S., as it restricts the extent in which the blockchain can be integrated into the existing infrastructures of large conglomerates.

“Businesses tell us that they don’t want to be left behind by blockchain, even if at this early stage of its development, concerns on trust and regulation remain. Blockchain by its very definition should engender trust. But in reality, companies confront trust issues at nearly every turn.”

Other major cryptocurrency markets like Japan and South Korea have been encouraging the development of blockchain technology and utilization of decentralized systems across various industries.

South Korea recently recognized the blockchain as one of the three key technologies of the Fourth Industrial Revolution, alongside big data and artificial intelligence (AI), as the government disclosed its plans to promote blockchain training to bring young talent into the fast-growing industry.

But, as $393 billion Alibaba chairman Jack Ma emphasized, China operates the world’s biggest manufacturing hub, which is actively shifting to smart manufacturing strategies and technologies to optimize the creation and distribution of products.

The “Made in China 2025” initiative, a strategic plan established by the government of China to implement sophisticated and advanced technologies to revolutionize China as an innovative hi-tech manufacturing powerhouse, is encouraging local firms to apply smart solutions, green development, and emerging disruptive technologies like the blockchain to efficiently manufacture products.

In a total of ten industries that include robotics, railway transport, hi-tech ship development, energy, agriculture, new material manufacturing, IT, and aerospace equipment manufacturing, the “Made in China 2025” strategy will deploy many innovative solutions.

Forest Tian, a venture capitalist and founder of Precision Intelligent Technology, said that China is moving to automation in manufacturing, which requires AI and data processing technologies like the blockchain to eliminate manual labor.

“The biggest trend in manufacturing is that automation is irreversible. There will be huge demand for these machines.”

At World AI Conference 2018, Ma firmly emphasized that if the blockchain, AI, and IoT projects fail to target the manufacturing industry, the three technologies will eventually fall behind.

“AI, Blockchain and IoT will be meaningless tech unless they can promote the transformation of the manufacturing industry, and the evolution of the society towards a greener and more inclusive direction.”

Less than four months ago, Chinese government-run national television network CCTV characterized the blockchain as a revolutionary technology that could be 10 times more valuable than the Internet.

“To build a regional equity market in Guangdong, according to the opening up of the capital market, timely introduction of Hong Kong, Macao and international investment institutions to participate in transactions. We will vigorously develop financial technology and accelerate the research and application of blockchain and big data technologies under the premise of legal compliance.”

How blockchain in agriculture enables a $430 million market

A study entitled “Blockchain: Agriculture Market Forecast until 2023” released on October 4, estimated the blockchain in agriculture and food supply market to be worth around $60.8 million. By 2023, within the next five years, researchers at ReportLinker stated that the market will grow to $429.7 million, at a compound annual growth rate of 47.8 percent.

“The blockchain market is expected to grow, owing to the increase in the demand for supply chain transparency along the agriculture and food verticals.”

Intel, the $213 billion chip manufacturing giant, launched the Sawtooth Enterprise Blockchain in 2017, a decentralized network that prioritizes scalability and security to transfer seafood internationally with a higher level of transparency.

Hyperledger, a major blockchain consortium operated by the Linux Foundation, officially launched Sawtooth under the Hyperledger banner in January, to cooperate with its member conglomerates to test the blockchain.

With strong infrastructure being built by Intel, Hyperledger, and public blockchain projects, a growing number of food suppliers have started to run pilot tests on the blockchain. Walmart and Nestle, along with 10 corporations in the food industry have been working with IBM to operate IBM Food Trust, an initiative that utilizes the blockchain to improve the traceability of food products.

Frank Yiannas, Vice President of Food Safety at Walmart, said in an interview that the existing traceability systems employed by food suppliers are costly and impractical.

“We never had the intention of creating a product, all this started with the notion that we want to create a transparent food system. The way forward is decentralised as opposed to a supplier getting into a centralised database and putting data in there and the central authority owning the data. In this blockchain ecosystem, if you get into it and give data, it is your data, you own it.”

Considering the progress that has been made by 12 of the world’s largest food suppliers to actively test, utilize, and implement the blockchain, it can be said that the food supply industry could be one of the first sectors to see actual widespread adoption of blockchain technology.

Already, as IBM offering director and vice president of blockchain solutions Suzanne Livingston explained, IBM Food Trust and the 12 companies have tested the applicability of the blockchain for over a year, clearing 500,000 transactions.

“We have been in production for close to a year. We are working with a handful of companies. General availability will be announced in the third quarter. We can then onboard a higher volume of companies. We are starting on a small scale to make sure we’re getting it right. We are very close to being there.”

In June, MarketsandMarkets published a new market research report “Blockchain in Retail Market by Provider, Application, Organization Size, and Region – Global Forecast to 2023,” disclosing that the blockchain in retail market is currently valued at $80 million.

By 2023, the researchers forecasted that the blockchain in retail market could grow to $2.339 billion, a Compound Annual Growth Rate (CAGR) of 96.4%. That is, the highest CAGR and forecasted growth amongst any blockchain-related industry.

The study suggested that the U.S. will lead the blockchain in retail market in the years to come, as the government has acknowledged blockchain technology as an important component of its innovation economy. Leading software-as-a-service (SaaS) providers have also started to offer blockchain-related solutions to conglomerates.

For retail, a blockchain network that is able to handle at least 50,000 transactions per second is required to facilitate large supply chains that support merchants.

The offshore banking market, which is mostly dominated by financial institutions and banks that oversee savings accounts for high profile retail traders and institutional investors, is estimated to be valued at around $32 trillion.

Coinbase alum and crypto investment firm 1Confirmation founder Nick Tomaino stated during an interview that based on speculation alone, the blockchain in finance market could achieve several trillion dollars in valuation.

“I see investing and speculating as adoption. I think it is possible that crypto gets from $200 billion to several trillion on just that [speculation]. From my perspective, what I’m seeing globally in terms of viewing this new investable asset class I think that’s possible.”

Most banks that operate in the offshore banking sector generate profit from transaction fees that occur when processing large transactions. For a transaction that surpasses $1 million, even on Transferwise, a platform that eliminates hidden bank fees, it costs over $7,500 to process it.

If the blockchain disrupts the global financial system, it is highly likely that the technology significantly impacts the offshore banking market by providing decentralized alternatives to investors that need to transfer value.

On October 16, a Bitcoin investor sent 29,999 BTC, the largest BTC transaction in recent months worth about $194 million, with a $0.01 fee. Given that it costs around 1 percent of the transaction to clear a $1 million payment in fiat currency, to send a $194 million transaction could easily cost hundreds of thousands of dollars with legacy systems.

As such, Alibaba chairman Jack Ma said in a recent speech that Alibaba is closely studying blockchain technology to ensure that a cashless society in which everyone is inclusive can be established.

“I pay special attention to cashless society and blockchain technology. Mine and Alibaba’s job is we will move the world into a cashless society. The society can make everybody equal, inclusive to get the money they need, make sure it is sustainable, and is transparent. I hate corruption. I don’t have opportunity is ok. But I don’t want somebody through a dirty way take away my opportunity. This is why we want a cashless society.”

There exists several public blockchain projects, such as Ripple and Stellar, that are working with banks and payment service providers to leverage the blockchain as a base layer to process payments.

Chain, which was acquired by Stellar to create Interstellar, collaborated with Visa to implement the blockchain prior to its deal with Stellar. Ripple has secured a partnership with Banco Santander to process payments on its mobile application with the Ripple blockchain network.

If some public blockchain networks can secure a fraction of the market share of the offshore banking sector and traditional stores of value like gold, then a multi-trillion blockchain market in finance could be achieved.

So far, blockchain in retail is predicted to be the biggest market for the new technology by 2023 at $2.3 billion. With analysts expecting blockchain technology in agriculture to be worth $430 million, and $500 million in manufacturing, a rapid growth of the technology has been foreseen.

Blockchain in energy and insurance are also predicted by MarketsandMarkets to grow to $7 billion and $1,4 billion respectively by the end of 2023, at a compound annual growth rate of 84.9 percent.