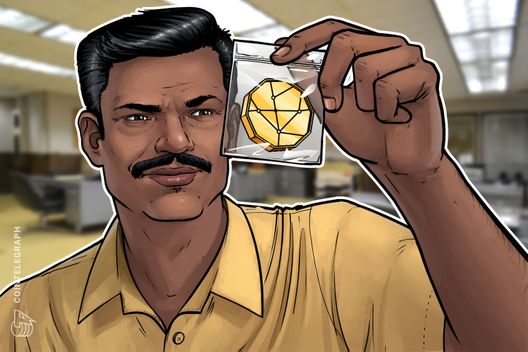 Police have seized an allegedly unregistered Bitcoin ATM machine in India and arrested its owner, the co-founder of domestic crypto exchange Unocoin.

The co-founder of Indian crypto exchange Unocoin has been arrested shortly after setting up an allegedly unregistered Bitcoin (BTC) ATM machine in Bangalore, English-language daily Times of India reports Oct. 24.

The 37-year-old co-founder, Harish BV, was apprehended by police after having reportedly  installed the ATM kiosk at Kemp Fort Mall on Old Airport Road, together with fellow Unocoin co-founder Sathvik Viswanath. The latter has not been arrested, as per media reports.

Indian business magazine Business Today (BT) cites a press statement from the Central Crime Branch (CCB), which claims the ATM installation did not receive “any permission from the state government and is dealing in cryptocurrency outside the remit of the law.”

As corroborated by multiple local Indian media sources, the ATM had not in fact yet been operational ahead of the police action, with Unocoin tweeting Oct. 20 that:

“Our Machine didn’t go well with few mainstream media reports who projected it under a negative light. The machine is still under final testing mode and it will be up and running in the upcoming week. The machine has been temporarily moved from its original place of installation.”

Harish BV was reportedly presented before an ACMM (Additional Chief Metropolitan Magistrate) court, which sent him to police custody for seven days. Police are said to have stated that “more arrests are likely,” and to have appealed to the public “not to be lured by the prospect of making huge profits” through crypto.

The Times of India reports the machine was used to facilitate cryptocurrency deals, with Indian digital newspaper The News Minute (TNM) outlining that it had been set up in response to the Reserve Bank of India (RBI)’s stringent ban on financial institutions dealing in cryptocurrencies.

TNM further cites Unocoin as saying that it had attempted to establish “newer mechanisms and solutions to reduce the […] [regulatory] hurdles [caused] by the present central government’s stan[ce].” Users of the machine could reportedly withdraw and deposit Bitcoin, but not buy or sell the cryptocurrency.

Referring to Minister of Finance Arun Jaitley’s 2018-19 budget speech, Unicoin’s Viswanath is quoted by the Times of India as saying that:

“The minister’s statement was clear: Cryptocurrencies are not legal tender in India. He did not say ‘illegal tender.’ There’s a huge difference. It means you bear the risk of your investment and there’s no regulation for the industry.”

As previously reported, Unocoin this summer announced it had suspended fiat deposits and withdrawals “as per orders” from the RBI. Crypto asset deposits nonetheless continue to be active on both Unocoin’s crypto-rupee trading platform and partner crypto-crypto exchange Unodax.