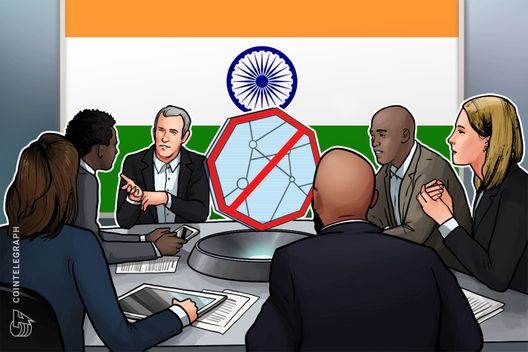 The head of Indian IT trade organization NASSCOM reportedly stated that cryptocurrency is “illegal” in the country, after two men installing a Bitcoin ATM were arrested

Debjani Ghosh, the president of the National Association of Software and Services Companies (NASSCOM), was cited by the Hindu saying that cryptocurrencies are illegal from NASSCOM’s perspective. NASSCOM is a nonprofit trade association of over 2,000 member companies for the Indian IT and business process outsourcing industries.

“It is [the] law of the land and hence, we have to work with it,” Ghosh claimed about cryptocurrency’s ‘illegal’ status. She added, “If we do not agree, we have to go back to the government and speak about why cryptocurrencies aren’t correct.” However, Ghosh noted that the “illegal” status of crypto is the result of the government’s failure to keep up with innovation:

“The genesis of this problem, however, lies in the failure of policy making not keeping pace with rapid technological changes. NASSCOM’s focus would be to say, how do you synergize technological development and policy making. I think that will be our focus.”

Cryptocurrency is currently legal in India, but in July the Reserve Bank of India (RBI) banned the country’s banks from servicing businesses involved in exchanging or processing digital assets. At the time, RBI cited risks to financial stability and the security of investors as being the main reasons behind the ban.

Following the crackdown, commentators were quick to note that, while banking activities for crypto business were suspended, it was not a ban on crypto in India outright. The country’s supreme court continues to uphold the ban even after hearing a raft of petitions.

Since July, the ban has had severe repercussions for the industry. Exchanges in particular have faced difficult conditions, with major platform Zebpay halting operations and relocating to crypto-friendly Malta.

Ghosh’s comments come after police clamped down this week on a project from crypto exchange Unocoin, arresting its co-founders after they installed a Bitcoin ATM in a Bangalore shopping mall.

Various media outlets have cited authorities who reportedly explained that the ATM “had not taken any permission from the state government and is dealing in cryptocurrency outside the remit of the law.” According to a police official quoted by the Times of India, the central bank considers cryptocurrency “illegal.”