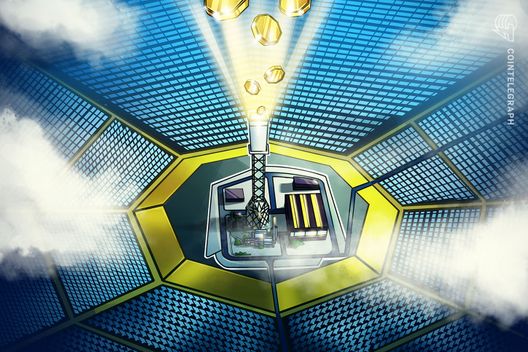 Despite the breakeven cost of Bitcoin mining at nearly $8,000, the demand for mining is increasing.

Throughout 2018, the cryptocurrency market experienced the fourth worst correction in its nine-year history, as Bitcoin lost more than 69 percent of the value from its all-time high of $19,500.

Despite the substantial decline in the price of Bitcoin (BTC), which heavily affects the earnings of miners, the hash power of the Bitcoin network has continuously increased throughout the past 10 months, from 15 million TH/s to over 50 million TH/s from January to October. 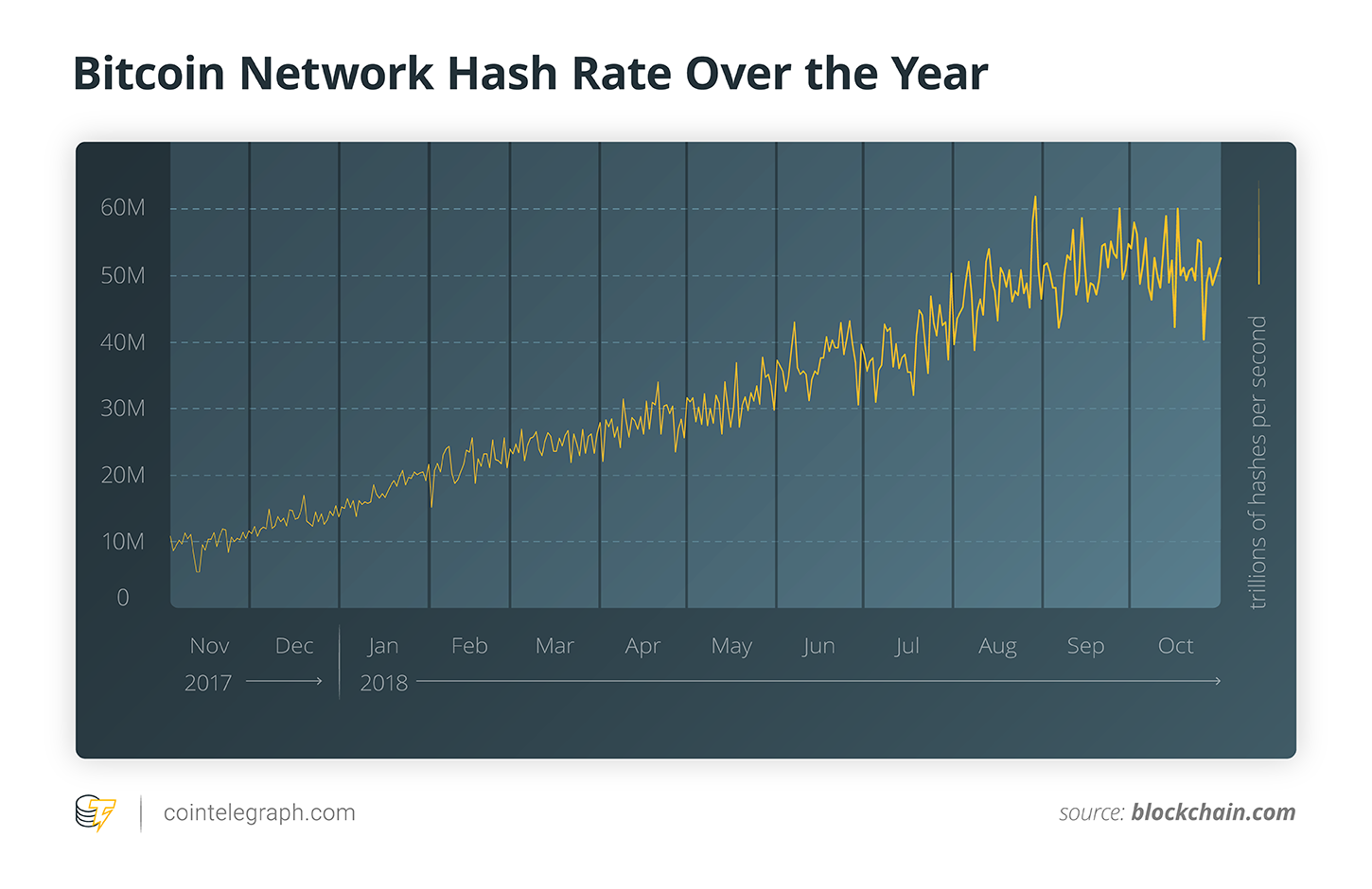 As portrayed by the research of blockchain analyst Barclay James, the breakeven cost of mining Bitcoin at 35 million TH/s is around $6,900. The formula employed by James considers the hash power of the Bitcoin network, the hashing power of an ASIC Bitcoin miner, and the efficiency of each miner in producing BTC:

Given the cost of Bitcoin mining, when its hash power is currently around 35 million TH/s and the value is $6,400, the breakeven cost of Bitcoin is in the $7,000 to $8,000 range. Which means, at $6,400, Bitcoin miners are losing money by generating BTC and are solely relying on their expectations of the price of BTC to eventually increase in the months to come.

For miners outside of China, specifically the mountainous region of Sichuan known to have the cheapest electricity in Asia and a cold climate that naturally cools down cryptocurrency mining equipment, it is even more expensive to mine BTC. The paper of Barclay James reads:

“China has some of the world’s cheapest electricity rates as well as average temperatures consistent with temperate regions. This is important as cooling is one of the largest overheads in mining. In addition, the country’s generally low operating costs also give it a competitive advantage. In fact, current estimates place 70 % of global hashing power in China, the majority of which is located in the Sichuan region.”

Since June, Bitcoin miners have been mining the dominant cryptocurrency at a significant loss. The fact that the hash power of BTC has continuously risen throughout the bear market of 2018 demonstrates large activity in the global cryptocurrency mining sector and the confidence of miners that the industry will recover as the year comes to an end.

Bitmain and its Antminer sold at a discount

BitMEX Research, a cryptocurrency firm that operates as a research subsidiary of major digital asset exchange BitMEX, disclosed in its paper in August that Bitmain, the dominant conglomerate in the cryptocurrency mining sector, has been deliberately selling its latest Bitcoin ASIC miner Antminer S9 at a lower price.

In 2017, Bitmain sold more than one million Antminer S9 miners and another 700,000 of them in the first quarter of 2018. According to the researchers, who calculated the disclosed gross profit margin of Bitmain in 2017 and the implied cost of each miner. Bitmain has set a negative profit margin of 11.6 percent for the Antminer S9, its main product.

The researchers stated that the distribution of Antminer S9 miners at such a low profit margin and the sudden increase in the sale of the miner in the first quarter of 2018 suggest the company employed a strategy to outsell its competition by underpricing its products.

“These low prices are likely to be a deliberate strategy by Bitmain, to squeeze out their competition by causing them to experience lower sales and therefore financial difficulties. In our view, herein lies the key to one of the main driving forces behind the decision to IPO. A successful IPO may increase the firepower available to continue this strategy and eliminate an advantage rivals could have by doing their IPOs first.”

The paper also proposed that the company may simply have too many Antminer S9 miners in its inventory.

In June 2018, Bitmain was criticized for shipping Antminer S9 miners caked with dust. Some miners alleged the firm of sending old or used ASIC miners. In response to this, Bitmain stated that all traders who received defective or affected Antminer S9 miners would be fully compensated.

“Any product can be imperfect, and there will be shortcomings in the process of enterprise development. We have also compensated the miners who have received mining equipment with inadequate computing power and the mining equipment are now being run properly.”

Whether the decision of the firm to sell its main ASIC miner with a low profit margin was to due to its competition or to clear its inventory, the end result was the distribution of an increased number of efficient and high performance ASIC miners to the global mining sector, which ultimately led to the increase in the hash power of the Bitcoin network.

Is Bitmain’s dominance in danger with the emergence of Samsung and GMO?

In the first quarter of 2018, Bitmain generated twice the profit of Nvidia, the world’s largest graphics card manufacturer. Nvidia generated $550 million in pure profit while Bitmain recorded $1.1 billion in profit from January to March.

The lucrative business model of Bitmain and its high profits led GMO and Samsung, two of the most influential technology conglomerates in Japan and South Korea, to enter the global cryptocurrency mining industry.

GMO introduced its own ASIC miner with competitive specifications in comparison to Bitmain’s Antminer S9. Samsung Electronics has allocated a portion of its foundry in Suwon, South Korea, to manufacture cryptocurrency ASIC miners, in partnership with emerging companies in the mining sector.

When Samsung Electronics first announced its decision to target the global cryptocurrency mining industry, it emphasized that it remains unsure whether it can improve the company’s revenues in general. But, the emphasis of the establishment on its mining venture was to engage in an emerging industry like crypto, given that it has successfully penetrated into insurance, fintech, electronics manufacturing, car making, and ship building in the past several decades. Samsung Securities analyst, Hwang Min-seong, said in January of this year:

“Samsung Electronics could increase its revenues through ASIC chip manufacturing but because the foundry only accounts for a small portion of the company’s semiconductor manufacturing plant, it is difficult to predict that the firm’s mining venture will have a significant impact on the company’s revenues.”

Since then, Samsung has aggressively expanded its mining businesses, seeing an increased demand in the market. The uncertainty of Samsung towards cryptocurrency mining demonstrated the firm’s unwillingness to commit to the industry unless the company sees significant potential in both the short-term and long-term growth of the market.

Most recently, Samsung signed a deal with Squire, a Canada-based crypto mining corporation that raised $19.5 million in August to develop cryptocurrency mining equipment, to manufacture ASIC miners on behalf of the Canadian firm.

The conglomerate stated that the weakening of the demand for cryptocurrency mining led the firm to decrease the growth target of the industry. But, it remains unclear whether the report is exclusive to Bitmain, given that TSMC is the manufacturer of Bitmain’s ASIC miners, or to the rest of the industry.

“However, our business is also negatively impacted by further weakening of cryptocurrency mining demand. As a result, we estimate our 2018 growth rate will be about 6.5% in U.S. dollar term, which is close to the foundry industry’s growth but slightly below our 7% to 9% guidance given in the last conference.”

Despite the conflicting viewpoints of Samsung and TSMC toward the demand for cryptocurrency mining, in the past several days, two multi-million dollar mining facilities have opened in Armenia and Colorado.

Local publications in Armenia reported that a new $50 million digital asset mining facility was opened on October 19 with 3,000 ASIC miners to mine Bitcoin and Ethereum. In the upcoming months, 120,000 ASIC miners are expected to be added to the facility.

It was local real estate firm Multi Group Concern (MGT) and Malta-based technology company Omnia Tech International Company which created the facility with the support of the government and local authorities.

The plan to build the facility was originally released in April, when Omnia Tech founder, Robert Velghe, said that the two companies intend to invest more than $2 billion in mining and crypto-related businesses in Armenia.

“We will also help Omnia Tech with the establishment of the Financial Technology Park and the data exchange center in Armenia. We intend to create here a blockchain-based center for the development of new information projects, which will turn Armenia into a high-tech platform.”

MGT COO Stephen Schaeffer emphasized that despite the decline in the price of Bitcoin, the company intends to “run into the burning building” to find opportunities, which in this case is to mine BTC.

Regulation and state of the mining sector

Many of the world’s largest economies are in the process of implementing practical regulatory frameworks to facilitate the growth of mining companies. Authorities in South Korea, Japan, and the U.S. have welcomed mining facilities to operate with low-cost energy. Countries with ambiguous cryptocurrency regulations such as China and Russia have also demonstrated a neutral stance towards mining.

Throughout the past 15 months, China has banned virtually every business and activity related to the cryptocurrency sector including trading, events, and over-the-counter (OTC) investment. However, it has opened two use cases of cryptocurrencies: processing transactions and mining digital assets.

In August, Deputy Governor of the Leningrad Region, Dmitry Yalo, said at the opening of a new mining facility in Russia that the region intends to lure in more mining centers in the years to come with low electricity prices, qualified personnel, and a naturally cold climate to cool down ASIC miners with no additional costs.

The conflict between the U.S. and China began to affect chip makers and mining equipment manufacturers based in China, including Bitmain. The 27.6 percent tariffs on the Antminer S9 has made it significantly more expensive for buyers outside Asia to purchase the miner.

The imposition of tariffs by the US against China comes in a period in which U.S. President Donald Trump has expressed concerns about the lack of reciprocity between the two countries. For many years, China has been able to ship products to the U.S. with near-zero tax and fee, thus, Amazon’s Vice President of Global Policy Paul Misener said once:

“The cost to ship a one-pound package from South Carolina to New York City would run nearly $6; from Beijing to NYC: $3.66.”

South Korea and Japan remain unaffected by the tariffs, and with practical regulatory frameworks established by both countries, Samsung and GMO are expected to continue their successful run in the global mining sector.

As of current, despite the significant drop in the price of major cryptocurrencies, the demand for cryptocurrency mining remains relatively high as seen in the rise in the hash rate of the Bitcoin network and the expansion of Samsung, GMO, and Bitmain’s operations.

Major regions have established positive regulatory frameworks towards cryptocurrency miners and companies, which could lead to the increase in the establishment of mining facilities by investors that foresee a substantial surge in the valuation of the crypto market in the mid-term.