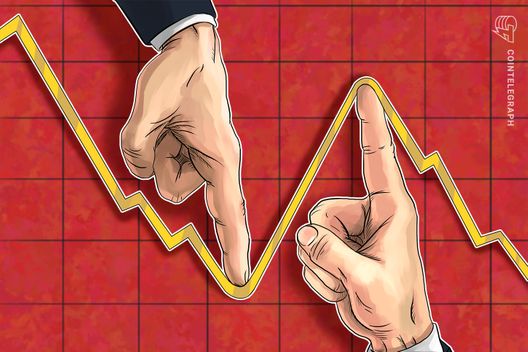 Crypto markets are continuing to see downward momentum with virtually all of the major cryptocurrencies in the red, and Bitcoin dipping below the $6,400 mark.

Friday, Nov. 9: crypto markets are continuing to see downward momentum, with virtually all of the major cryptocurrencies at least mildly in the red, as data from Coin360 shows. 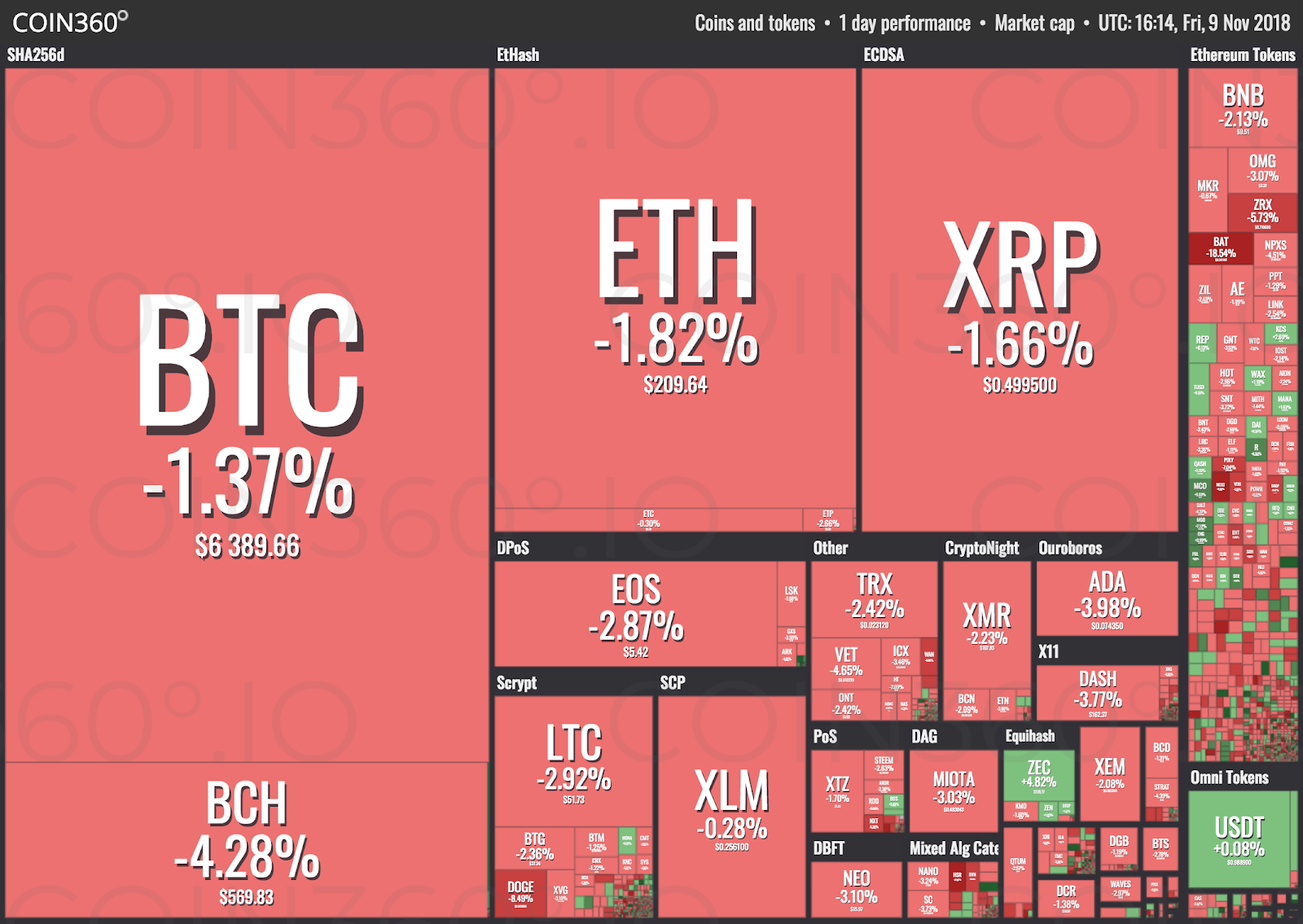 Bitcoin (BTC) is down just over 1 percent, trading around $6,340 at press time. After a period of protracted stability, the top coin has seen a short-lived burst of price action of late, growing Nov.7 to break above the $6,500 mark.

Bitcoin has since corrected downard to trade close to the start of its weekly chart, where it is seeing virtually no price percentage change to press time. On the month, Bitcoin is down a mild 3.6 percent. 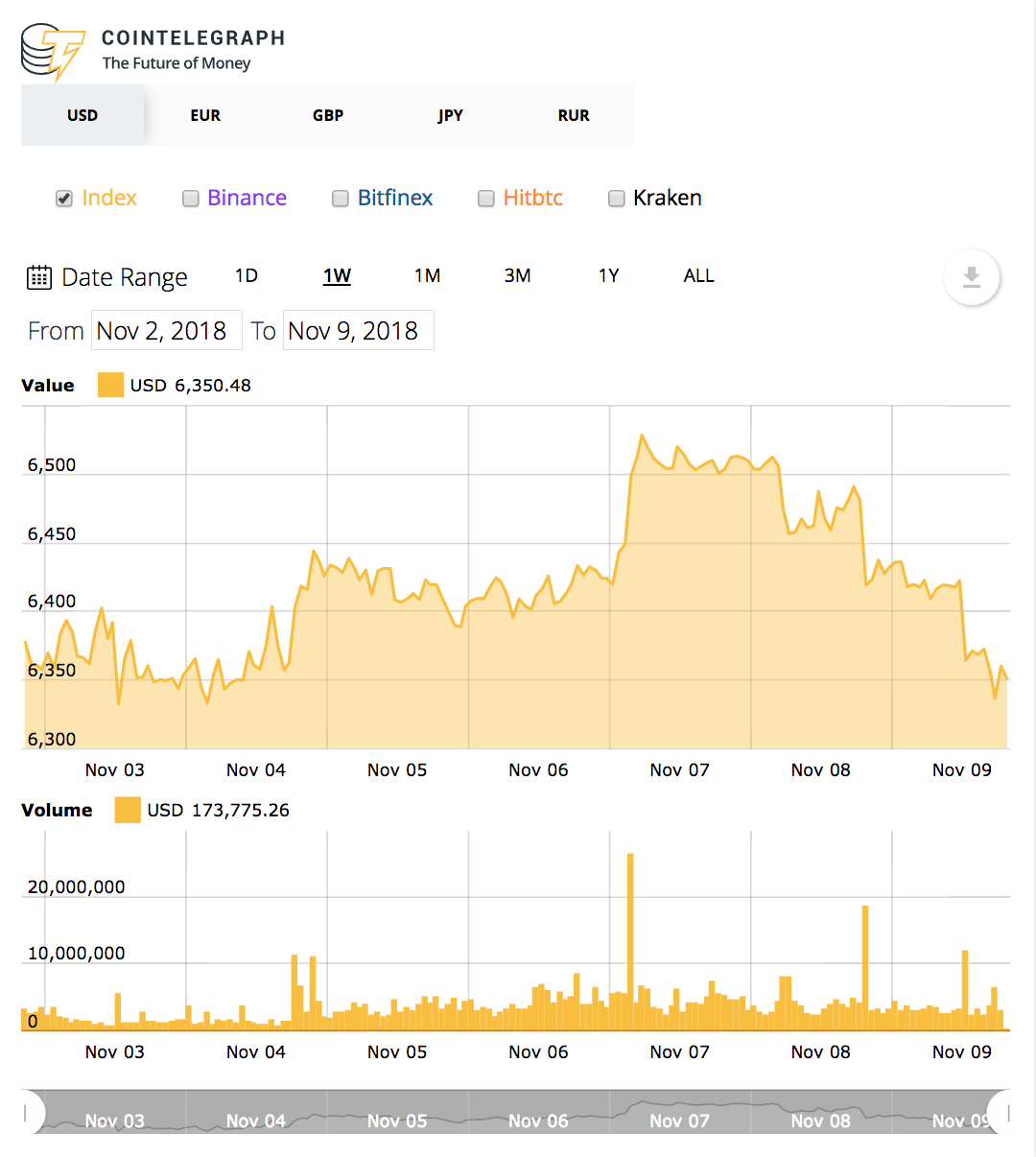 Bitcoin pioneer Jeff Garzik – reportedly the “third-biggest contributor” to Bitcoin’s code and one of Bitcoin creator Satoshi Nakamoto’s key collaborators – gave an interview today in which he reflected that:

“[Bitcoin] hasn’t evolved in the direction of high-volume payments, which is something we thought about in the very early days: getting merchants to accept Bitcoins. But on the store-of-value side it’s unquestionably a success.”

The market’s largest altcoin Ethereum (ETH) has also sustained a fractional loss, down just over percent to trade at $211. Correlating with Bitcoin, the altcoin saw an intra-week spike at around $220 Nov. 7, and has since jaggedly shed value down to its current price point.

Nonetheless, on the week, the asset remains a strong 6 percent in the green, with monthly losses at around 7.2 percent. 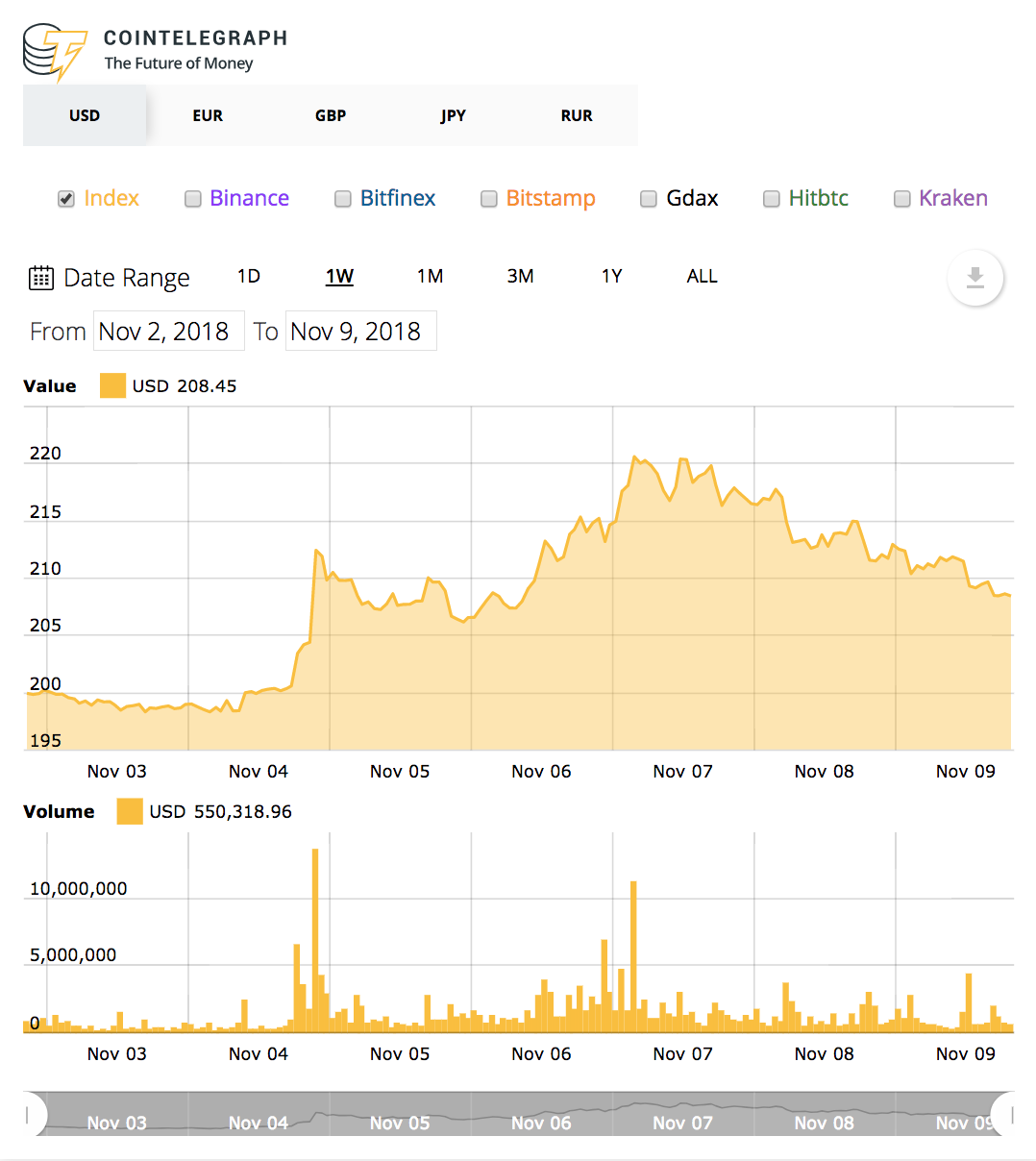 Most of the remaining top ten coins on CoinMarketCap are in the red, although remaining within a 1-4 percent range.

Bitcoin Cash (BCH) has taken the heftiest hit among the top ten, down just under 4 percent to trade around $567, as controversies ahead of its forthcoming hard fork – scheduled for Nov. 15 – continue to divide the community.

Altcoins Ripple (XRP) and Stellar (XLM) are the only top ten coins in the green by press time, both up under 1 percent over the past 24 hours.

The top twenty coins by market cap are likewise almost unanimously red, with the exception of the 19th largest crypto, privacy-focused alt Zcash (ZEC), which is pushing 3.5 percent growth to trade at around $133.

For the remaining coins, losses are capped below 4 percent, with Vechain (VEC) and DASH (DASH) each on the higher end, down 3.9 and 3.47 percent respectively.

Total market capitalization of all cryptocurrencies is around $212.5 billion as of press time, down from an intra-week high of around $220.7 billion Nov. 7, but above the $207-210 billion levels it held throughout much of the past month.

In other major crypto news of the day, ConsenSys-backed blockchain startup Kaleido and Amazon Web Services (AWS) have launched a full-stack platform that helps enterprises implement blockchain solutions without starting from scratch. The platform, dubbed Kaleido Marketplace, reportedly “eliminates 80 percent of the custom code” needed to build a given blockchain project.

In Asia, Thailand’s securities regulator is set to clear “at least one” Initial Coin Offering (ICO) “portal” to operate legally this month, with officials saying that ICOs themselves “might” start being approved as soon as December.