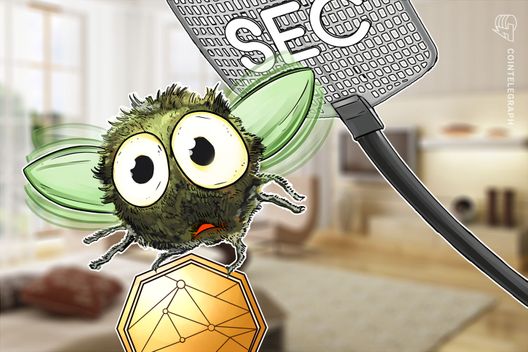 Crypto loans company Salt, once associated with Erik Voorhees, is facing an SEC probe over its 2017 $50 million token sale and whether Voorhees’ involvement broke the law.

Founded in 2016, Salt — which uses clients’ crypto holdings as collateral against fiat currency loans — is reported to have received a subpoena from the securities regulator this February, according to “sources familiar with the matter.”

Among other issues, the SEC is said to be investigating whether Salt’s 2017 token sale was a noncompliant securities offering (i.e. whether it should have been registered with the SEC), how token proceeds were used, and the manner in which Salt employees received tokens.

Voorhees, who is well known as CEO of crypto exchange ShapeShift, is reported to have played a “leadership” role at Salt, and was notably listed as a “director” in an SEC filing five days ahead of the first SALT token sale in August 2017.

This latter point is now of particular contention, as Voorhees has previously been investigated by the SEC and has effectively been prohibited from raising money in private markets. In 2014, he reached a settlement of $50,000 in fines and disgorgement with the SEC over allegedly unregistered public offerings of securities in connection with two of his early Bitcoin (BTC)-related ventures.

Keith Higgins, chairman of the securities and governance practice at Ropes & Gray LLP and a former SEC division director, told the WSJ that:

“A provision in the [2014] settlement makes him a so-called ‘bad actor’ unable to rely on an SEC safe harbor for private, unregulated stock sales.”

Aside from being listed on Salt’s summer 2017 SEC filing, Voorhees was also named as a Salt director on the company’s site and promotional materials, according to the WSJ’s review. In November 2017, Salt reportedly amended its SEC disclosure, declaring the $1.5 million it had raised, and refraining from any mention of Voorhees.

Jennifer Nealson, a Salt executive, has confirmed to the WSJ that the firm received a February subpoena, and clarified that Voorhees was an “early contributor” to Salt, but stated he “no longer serves in any formal capacity.”

Securities lawyers have said the SEC could seek civil penalties against the company if it deems that Voorhees’ involvement broke the law.

Aside from the probe, Salt is facing a private lawsuit in the U.S. state of Colorado from a former Salt financial officer, who has accused the firm of giving loans on advantageous terms to insiders, and of having lost $4 million worth of crypto in a February 2018 hack. Voorhees has reportedly not been named as a defendant in the case.

Brian Klein, the trial attorney who represented Vorhees in his 2014 settlement with the SEC has responded to the WSJ article, tweeting:

“I am proud to represent @ErikVoorhees, a real visionary, who has abided by his SEC settlement terms. This @WSJ story is an unfair attack on him relying on unsubstantiated allegations, anonymous sources, and he is not even a party to the lawsuit discussed.”

Earlier this fall, Voorhees refuted a WSJ report that alleged that $9 million in ill-gotten funds were laundered through ShapeShift, claiming that the WSJ had misrepresented or omitted the information provided by the exchange.