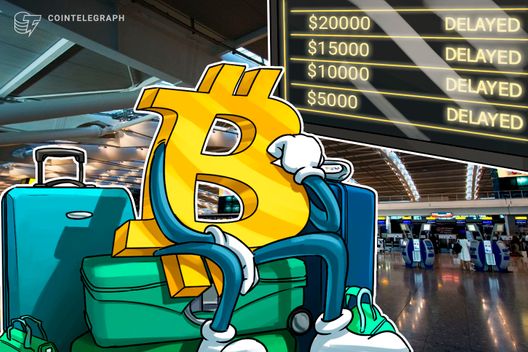 Anthony Pompliano, partner at crypto investment firm Morgan Creek Digital Assets, says Bitcoin will likely fall to 85 percent below its all-time-highs, to around $3,000.

Crypto industry investor Anthony Pompliano says Bitcoin (BTC) will likely fall to 85 percent below its all-time-highs – around $3,000. Pompliano gave his forecast during an interview on CNBC’s Squawk Box Nov. 26.

The partner at crypto investment firm Morgan Creek Digital Assets argued that while “Bitcoin was overvalued in Dec. 2017” – with selling pressure this year subsequently driving its price downwards – there are several important factors related to the asset’s long-term value that are important to remember:

“First, [Bitcoin] is the most secure transaction settlement layer in the world, so it’s got to be worth something […] it’s the best performing asset class over the past ten years – it’s outperformed S&P, DOW, NASDAQ, etc. during the longest bull run. It experienced two 85 percent drops during that time, but [it’s] still up over 400 percent in the last two years.”

Third, he added, all of Bitcoin’s price action in past years has been driven by retail investors – ahead of any meaningful involvement from major institutional players such as those now poised to enter the crypto space next year. Big players include Fidelity and New York Stock Exchange (NYSE) operator Intercontinental Exchange (ICE).

Pompliano argued that the recent “wash-out” on the crypto markets is a barometer of retail investor patterns; throughout its retail-driven history in 2017, the cryptocurrency traded as a “highly volatile speculative asset.” By contrast, he continued, more recent institutional involvement is primarily conducted via less transparent over-the-counter (OTC) trades, where trends are not immediately apparent and harder to gain insight into.

Pompliano was lastly asked about dwindling profit margins for cryptocurrency miners as the asset’s value tumbles. He conceded that outside of regions with abundant low cost power, such as China – where he claimed miners can mint Bitcoin for as little as $2,000-2,500 – we are seeing a similar “wash out” of miners in areas where electricity costs push expenses closer to $6,000 or $6,500. These latter, he said, “are underwater now.”

As previously reported, Morgan Creek Digital assets is backed by the institutional investment house Morgan Creek Capital, which has $1.5 billion in assets under management. The firm launched a Digital Asset Index Fund in late August, which gives accredited investors indirect exposure to Bitcoin, Ethereum and eight other large market cap assets, although not pre-mined cryptos such as Ripple (XRP) and Stellar (XLM).

Speaking yesterday, Vinny Lingham, CEO of identity management startup Civic, predicted Bitcoin will trade range-bound between $3,000 and $5,000 for at least three to six months; if the coin fails to then break higher, it could lose the $3,000 support as well.

Bitcoin is currently trading at $3,730 by press time, down just over 6 percent over the past 24 hours.