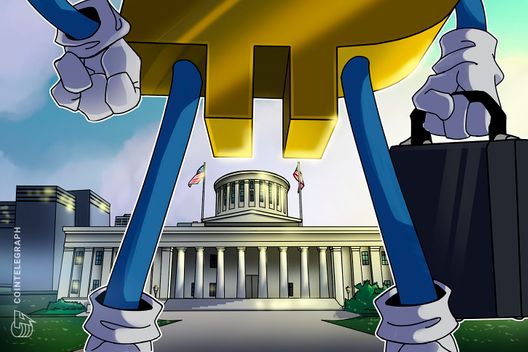 In what is being hailed as a first in America, Ohio’s State Treasurer Josh Mandel has made it possible for businesses to pay taxes using Bitcoin.

In the coming weeks, business owners in the state will be able to register and settle their tax liabilities online, with payments to be processes by cryptocurrency payment service provider BitPay.

Businesses will be able to pay 23 different taxes using BTC through an online portal that has been set up by the state treasury office. As it stands, individuals will not be able to use the service to pay private taxes.

The Ohio Treasurer has made it clear that it will not actually hold any Bitcoin. The cryptocurrency will be immediately converted to U.S. Dollars after payments have been made to BitPay. Businesses of any size will be able to make use of the payment service.

Reasons for the move

The Ohio Treasurer has stated that the move is one to provide more options for state businesses and residents to interact with the state government.

Mandel has been somewhat of a pioneer in leveraging emerging technologies into state systems and offerings. In 2014, he launched OhioCheckbook.com, which put all of the Ohio state government spending information online and accessible to the public.

The move saw the state rated number one for government transparency, according to research from the U.S. Public Interest Research Group.

This latest move is in the hopes of making the state a leader in blockchain technology development and adoption, as Mandel told Cointelegraph in an interview this week. Firstly, the state wants to offer taxpayers more options when paying taxes:

“Secondly, to project to the rest of the country and the world that the state of Ohio is a leader in blockchain technology. I believe if we’re going to grow our technology economy here in Ohio, we have to first be a leader in technology.”

Mandel added that he had been a crypto enthusiast for a few years and that this is just part of a process of inspiring wider adoption of cryptocurrency and blockchain technology around the country:

“Here in the United States, states are the laboratories for democracy, and I think this is a perfect illustration of this concept — where this idea is beginning at a state level in Ohio, but the ultimate goal is to inspire the federal government to follow suit.”

Longevity of the project

Mandel’s term as Ohio Treasurer is set to end in January 2019, but he remains confident that the move will continue to operate once he leaves his post.

It has been reported that Mandel has discussed this with his elected successor, Republican Representative Robert Sprague, and Mandel confirmed to Cointelegraph that they’d discussed the matter:

“I’ve spoken with him about it, he and I are friends and allies, and I am confident that it will continue.”

Having launched just this week, phase one only allows businesses in Ohio to be able to pay taxes using cryptocurrency. But as Mandel explains, this is just the first step of some ambitious plans to accept different cryptocurrencies and offer the service to individual taxpayers.

“In the next phase of Ohiocrypto.com, we hope to expand the initiative to allow individuals to pay their taxes in cryptocurrency and expand beyond Bitcoin to include other cryptocurrencies.”

Given the infancy of the project, Mandel was reluctant to speculate on a given timeframe for the role out of further improvements.

“As with any initiative that is brand new and has never been done in America, it’s important that we take it slow and be prudent and thoughtful. We’re going to take the process slowly, and develop and expand it on what we believe to be a prudent timeline.”

Mandel also explained that the decision to convert Bitcoin straight to fiat currency was taken after extensive research by his team.

“When you’re dealing with taxpayers’ money, the variables that are most important are safety and security of the tax money. Every decision we make in the Ohio Treasury office is driven by this.”

BitPay CEO Stephen Paire told Cointelegraph that the initiative is an important one for blockchain-based and cryptocurrency-focused businesses that could make effective use of the payment option:

“One of the things we do is talk to all the different companies in the blockchain and cryptocurrency industry and find out who their vendors are. We then talk to them and get them signed up with BitPay, and that enables companies in our industry to be able to pay their bills with the technology they’re building the infrastructure for. Obviously, all these companies have to pay taxes, so it just makes a lot of sense for all those companies to have the ability to pay their taxes with cryptocurrency.”

Ohio is the first state in America to actually launch this new method of payment, but it is not the first to have tried.

Other U.S. states have tried to pass bills that would allow taxes to be paid using cryptocurrency. However, these bills have been stopped in their tracks by state lawmakers.

In May 2018, Arizona’s House of Representatives passed a bill that would enable citizens to pay taxes using cryptocurrency. Despite that fact, the bill has yet to come into effect due to amendments in the fine print.

The revision called for a study into the possibility of these alternative payment forms, but it has not been made clear when this will be carried out.

Similarly, Georgia looked to pass a bill in February that would allow cryptocurrencies to be used as a payment option for state taxes and licenses. However, the bill “died in committee,” according to a progress update on Legiscan. Illinois is also in the process of considering a similar bill.

Despite these failures, other U.S. states have passed various bills that have helped the adoption cryptocurrencies and blockchain technology which bodes well for the future of adoption.

Wyoming was able to pass a number of bills that saw cryptocurrencies classified as a new asset class in the state in March 2018.

Things could get complicated

The move does have some interesting implications for businesses that will look to take advantage of the new payment method.

A number of countries around the world have enforced taxes on cryptocurrency gains and this will be something to consider for those entities that will pay their taxes using Bitcoin.

As international tax attorney Selva Ozelli pointed out to Cointelegraph, businesses will have to grapple with additional processes when holding and using cryptocurrencies:

“Businesses will need to keep track of the basis, holding period, price of cryptocurrencies; they will need to learn how to hedge the price swings between USD and cryptocurrencies; they will need to comply with FinCEN money laundering and additional laws. They will have increased record keeping requirements and more sophisticated treasury functions — just like multinational companies. On the other hand, these enhanced compliance requirements will encourage blockchain companies to design systems to simplify such functions for businesses going forward and fuel growth in blockchain technology-related jobs.”

Dr. Niklas Schmidt, a partner at the law firm Wolf Theiss, also made a similar observation, especially for businesses that have held onto their Bitcoin for some time:

“Payment of taxes in cryptocurrency creates an interesting problem: If a taxpayer has purchased, say, Bitcoin some time ago and has an unrealized gain, in most jurisdictions, discharging a liability with such an appreciated asset will lead to a taxation of the gain. In other words, payment of your taxes in Bitcoin may again trigger tax.”

Another factor to consider is that businesses in the state will still be liable to pay federal tax, which can only be done with fiat currency, according to Schmidt.

This tax payment option is not entirely new, but considering the impact it may have in Ohio and America, it could potentially spread to more countries.

While these moves may have failed in other American states, Ozelli believes that the success of such initiatives in other countries proves that there is an interest in this option being available.

“In the U.S., other states around the country also considered accepting cryptocurrencies for taxes, but those initiatives in Arizona, Georgia and Illinois never got past state legislatures. The Swiss municipality of Chiasso allowed residents to pay their taxes in Bitcoin starting in January of 2018, while Seminole County, Florida, became the very first county in the U.S. to announce accepting Bitcoin to pay their taxes in May of 2018.”

Schmidt also told Cointelegraph that Zug, a municipality in Switzerland, also accepts tax payments in Bitcoin. With more than a few places around the world actively offering this payment option, it does seem to bode well for this becoming more commonplace.

Cryptocurrency investment advisor Anthony Pompliano made an astute observation in his daily newsletter, citing milestones like this as an important use-case example for cryptocurrency going forward:

“Historically, Bitcoin detractors have said the digital asset couldn’t be a currency because you can’t pay your taxes with it. That is obviously no longer true now. This is another data point that supports the legitimization of the world’s most popular decentralized digital currency.”

Governmental agencies and financial institutions are slowly seeing the value in incorporating cryptocurrencies into certain processes. Every step in this direction is a positive one, especially when the focus is on the current state of the markets.

Mandel hopes that his work with the Treasury will play a part in influencing other states to follow in their footsteps and eventually take hold at a national level:

“I hope what we’re doing in Ohio will inspire states around the country to allow their taxpayers to pay in cryptocurrency and ultimately inspire the federal government to pay federal taxes with crypto as well.”