Crypto markets go green on the first day of December, with Bitcoin breaking and holding the $4,200 threshold.

Saturday, Dec. 1 — Crypto markets have seen a substantial influx on the first day of this winter month, with all top 20 coins by market cap firmly in the green, according to CoinMarketCap. 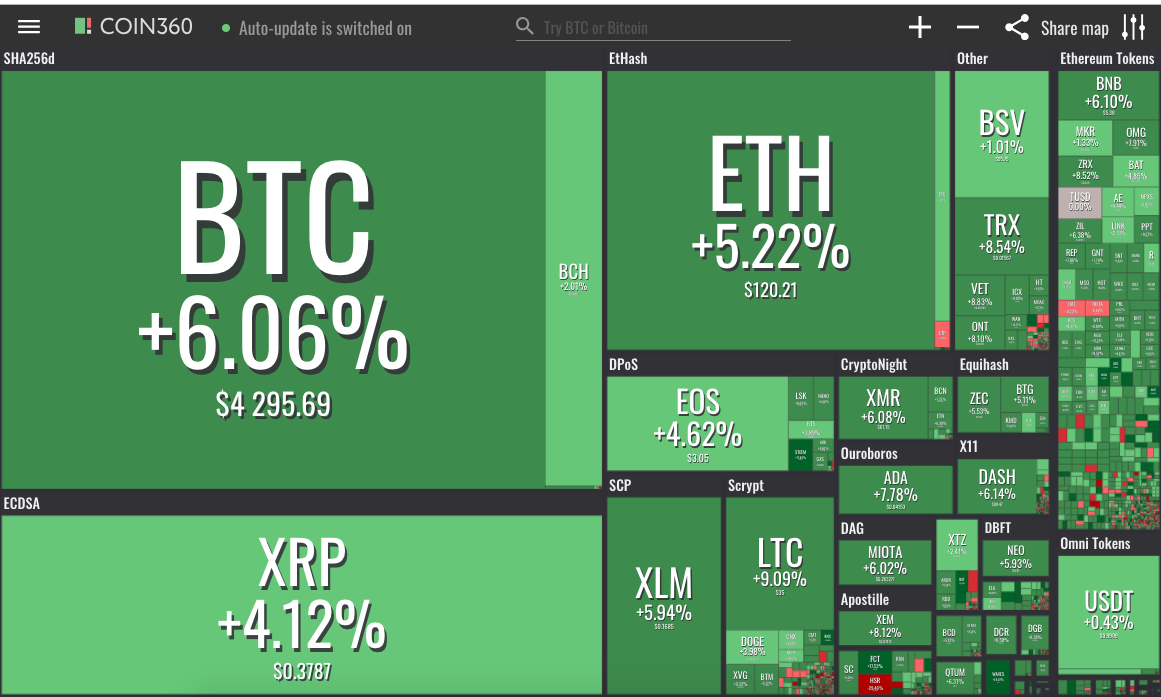 Following multiple plunges below the $4,000 threshold yesterday, Nov. 30, Bitcoin (BTC) has managed to finally hold $4,000 support today. The major cryptocurrency is now trading at $4,202, up 4.5 percent over the past 24 hours to press time. Bitcoin is down around 1.9 percent over the week, according to data from CoinMarketCap.

Ripple (XRP), the second cryptocurrency by market cap, is seeing milder gains, up around 3 percent over the past 24 hours and trading at $0.37 as of press time. The coin is seeing considerable losses over the week, down more than 7 percent.

TRON (TRX) and NEM (XEM) are seeing the biggest gains among the top 20 coins by market capitalization. TRON, ranked 11th on CoinMarketCap by press time, is up 6.5 percent, also holding a significant grown over the week — more than 11 percent. NEM is up 7 percent, seeing around 5 percent gains over the past 7 days.

Bitcoin Cash’s (BCH) hard fork, Bitcoin SV (BSV), is seeing a massive increase over the past 7 days, up more than 45 percent over the period. The hard forked cryptocurrency is ranked nine on CoinMarketCap and is trading at around $94, seeing a small growth over the day — around 0.1 percent.

Total market capitalization has seen a marked increase over the day, having spiked from around $129 billion to as high as the current $137 billion. Daily trade volume has been stable over the day, accounting for $16 billion, while seeing a small drop to $15 billion at press time.

While the markets have taken another dip recently, Bitcoin fundamentals, such as cost per transaction and number of transactions, have increased, as noted by crypto evangelist Anthony Pompliano, a partner at crypto investment firm Morgan Creek Digital Assets.

In yesterday’s post, Pompliano emphasized seven fundamentals of Bitcoin, pointing out the increasing number of Bitcoin wallets as well as the growth of the amount of daily confirmed transactions.

The crypto believer also stressed the increasing power of Bitcoin’s hash rate, claiming that it has almost “quadrupled in the last year or so,” while the number of Bitcoin nodes has been 98 percent up over the last two years, the expert said, citing data from Bitnodes.

Concluding his analysis, Pompliano argued that price of a cryptocurrency is “only one measurement of value for an asset,” stating that underlying fundamentals is the main focus of the future value of the currency. He wrote:

“Don’t be distracted by the noise. Focus on the fundamentals. Bitcoin isn’t going anywhere.”