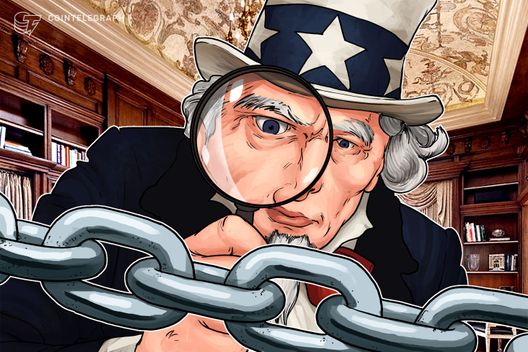 The U.S. Department of Homeland Security is seeking innovative blockchain-based solutions from startups to prevent the forgery and counterfeiting of digital documents.

The United States Department of Homeland Security (DHS) is seeking blockchain-based solutions from startups to prevent the forgery and counterfeiting of digital documents, according to a press release published Dec. 4.

According to the release, the request has been published under the aegis of DHS’ Science and Technology Directorate (S&T)’s Silicon Valley Innovation Program (SVIP). The call is open to startups or small enterprises that have not had a government contract in the past 12 months (totalling $1 million or more) and that have a workforce of under 200 employees. The release links to a detailed solicitation, entitled “Preventing Forgery and Counterfeiting of Certificates and Licenses.”

The solicitation outlines that DHS is interested in possible interoperable implementations of blockchain and Distributed Ledger Technologies (DLT) that could serve the “mission needs” of one or more of its programs or components; these include the U.S. Customs and Border Protection (CBP), U.S. Citizenship and Immigration Services (USCIS), and Transportation Security Administration (TSA).

The new SVIP call has been released in partnership with all three – the CBP, USCIS, TSA – and is purportedly the first SVIP solicitation to support USCIS use-cases. S&T SVIP Technical Director Anil John issued an official statement in the release, outlining that:

“The broad Homeland Security mission includes the need to issue entitlements, licenses and certifications for a variety of purposes including travel, citizenship, employment eligibility, immigration status and supply chain security. Understanding the feasibility and utility of using Blockchain and [DLT] for the digital issuance of what are currently paper-based credentials is critical to preventing their loss, destruction, forgery and counterfeiting.”

Homeland security use cases are broken down for applicant startups as necessarily pertaining to one of the following six categories: “Identity Documents for Travel, Identity of Organizations and Organizational Delegates, Tribal Identity Documents for Travel, Citizenship, Immigration and Employment Authorization, Cross-Border Oil Import Tracking, [and] Origin of Raw Material Imports.”

Successful participant startups will reportedly receive up to to $800,000 in non-dilutive funding over four phases; the press release notes that participation, however, “does not ensure procurement contracts with DHS or its components.”

As reported this week, DHS issued a pre-solicitation notice for parties to comment and design applications for blockchain forensic analytics in respect to emerging cryptocurrencies. DHS’ proposal called for analytics solutions for privacy-oriented altcoins such as Zcash and Monero in particular.