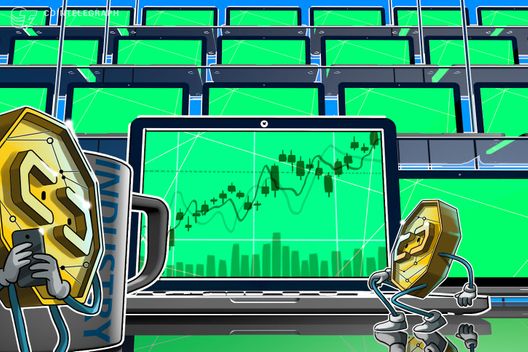 Crypto markets have overcome yesterday’s downturn, as the top 20 coins are seeing green across the board.

Wednesday, Dec. 12 — Cryptocurrency markets have seen moderate gains on the day, with all top 20 coins by market capitalization in the green, according to Cointelegraph’s Coin360.

Today, Cointelegraph reported that the R&D lab at crypto startup TenX has tested the use of its cross-blockchain interoperability protocol to exchange ERC-20 tokens. The goal was to exchange the tokens — which run on the Ethereum (ETH) platform but are not strictly native to it, since they rely on invoking a smart contract to transfer ownership — for Bitcoin’s smallest transactable unit, known as “Satoshi,” using the second-layer scalability Lightning Network protocol.

The second-largest cryptocurrency, Ripple (XRP), has taken an upturn and is currently trading at $0.308 at press time, up 2.36 percent on the day. On its weekly chart, the coin is down over 9 percent, while its lowest price point was around $0.29 on Dec. 7.

The third cryptocurrency by market cap, Ethereum, is currently trading at $91.41, up by 2.77 percent over the last 24 hours. The coin has seen substantial losses over the last week, down more than 12 percent.

After experiencing a massive increase following its hard fork from Bitcoin Cash (BCH), Bitcoin SV (BSV) saw a drop of over 6 percent yesterday, Dec. 11. Today, the altcoin is trading sideways, and is neither up nor down over the last 24 hours. BSV is trading at 90.14 at press time, according to CoinMarketCap.

Yesterday, the Malta-based cryptocurrency exchange OKEx announced that it will list Bitcoin Cash ABC under the original Bitcoin Cash ticker BCH. It will also change the Bitcoin Cash SV ticker from BCHSV to BSV.

BCH has also seen some gains over the last day, up 1.8 percent. The altcoin is trading around $103 at press time.

On its weekly overview, BCH has experienced considerable losses, down almost 23 percent. The coin’s highest price point on the week was $133.37 on Dec. 6 and subsequently dropped as low as $97.80.

Among all top 20 coins, only Tezos (XTZ) has registered double-digit gains, up 13.82 percent over the day. The altcoin is trading at $0.415 at press time.

Total market capitalization of all cryptocurrencies is around $110.9 billion at press time, according to CoinMarketCap. Daily trade volume is around $11.8 billion, up from around $107.8 billion at the beginning of the day.

Meanwhile, the Canadian city of Calgary, Alberta launched its own digital currency. Calgary Dollars work through a smartphone app that lists shops and restaurants that participate in the program. Citizens can spend their Calgary Dollars to pay for lunch, make a donation to some of Calgary’s nonprofits or buy municipal transport tickets.