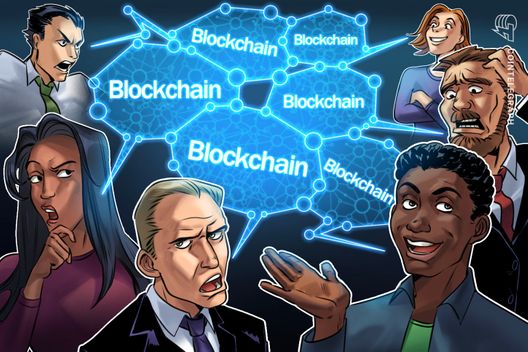 After months of monitoring and observing the potential of blockchain, EU is finally making a turn into it

After months of monitoring and observing the “promising and challenging” potential of distributed ledger technology (DLT), the European Union (EU) is finally making a turn into the blockchain industry.

How it all started

Back in February 2018, the European Commission (EC) launched the EU Blockchain Observatory and Forum, aimed to support European cross-border engagement with the technology and its multiple stakeholders and to unite the economy around blockchain.

Since its official launch, the newly established organization — supported by European Parliament — has released three thematic reports: the first one in July, dubbed “Blockchain Innovation in Europe”; the second one in October, “Blockchain and the GDPR”; and the third one in December, “Blockchain for Government and Public Services.”

The second major step was taken in April when 22 countries — 21 EU member states and Norway — signed a Declaration that created a European Blockchain Partnership (EBP). During 2018, five more European countries joined the EBP: Greece and Romania in May, Denmark and Cyprus in June, and Italy — the last member to join — in September. The partnership’s main focus is on cybersecurity, privacy, energy efficiency and interoperability, all in full compliance with EU law.

As Mariya Gabriel, commissioner for the Digital Economy and Society, underlined welcoming the established of the EBP:

Blockchain is a great opportunity for Europe and Member States to rethink their information systems, to promote user trust and the protection of personal data, to help create new business opportunities and to establish new areas of leadership, benefiting citizens, public services and companies (sic) 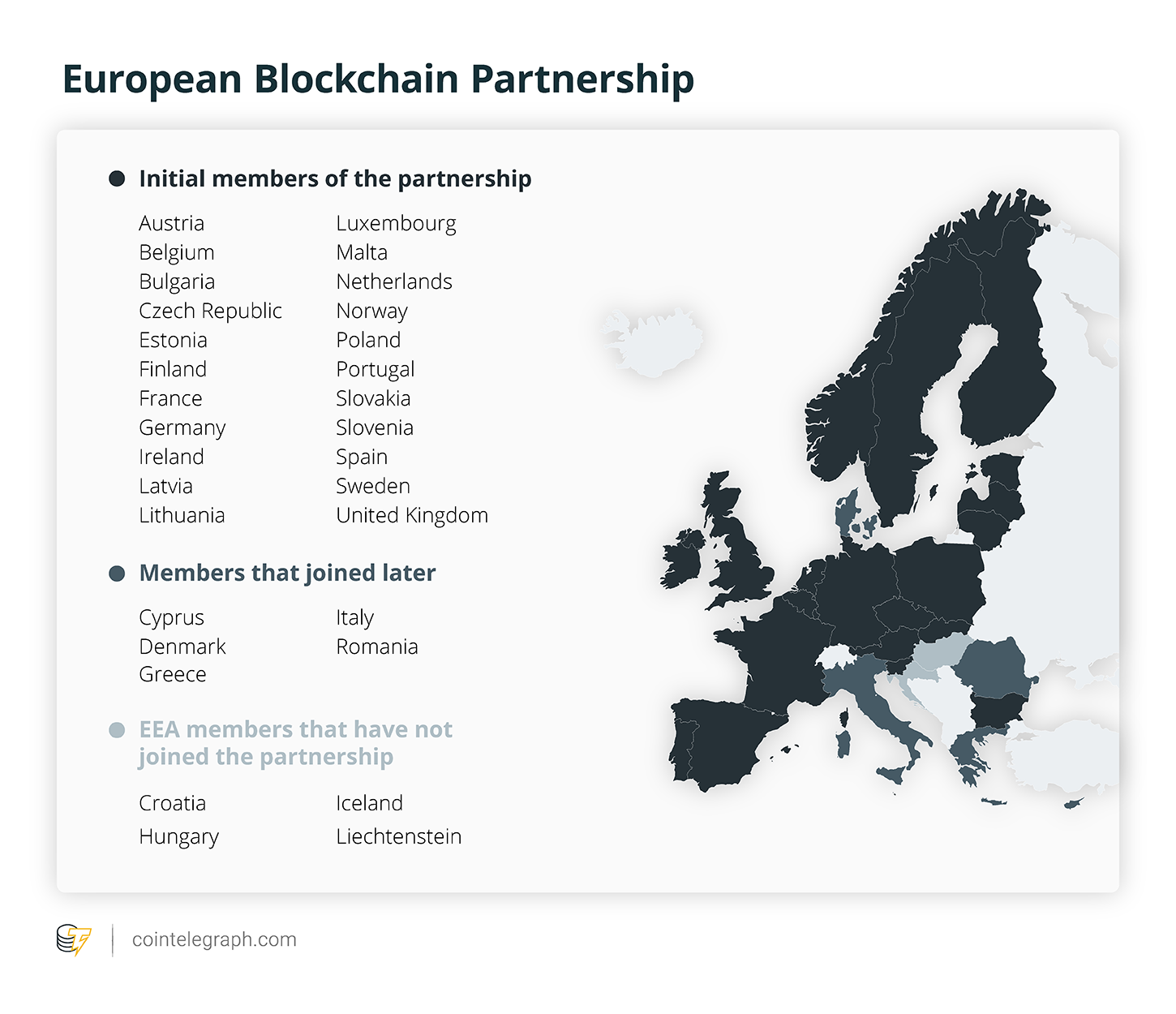 Back in the fall, ResearchAndMarkets.com published a new report dubbed “EU5 Blockchain Technology Market (2018-2023).“ In the report, the EU is expected to increase its investment into blockchain- and DLT-related projects from $94 million in 2018 to $386 million by 2020. The positive view within the document toward the blockchain industry in Europe is based on several crucial facts: The EC is liberalizing the industry’s regulation and it creates a new task force entrusted with blockchain expertise.

Another move toward blockchain was made in October this year when the European Parliament formed a resolution titled “Distributed ledger technologies and blockchains: building trust with disintermediation.” The resolution states that DLT “could potentially affect all sectors of the economy,” but it focuses on several important spheres: finances, health care, transport, education, copyrights, public governance, data protection, and some others.

The agreement shows that the Parliament has set the plans for the EC to ensure that its proposed policies would be realized, taking into account benefits of the DLT implementations and warning about some of the related risks. This resolution is a crucial document, as it means that Parliament articulated several main features.

The potential of DLT implementation in the health care and medical sector was among the first initiatives discussed by the European Union. My Health My Data (MHMD), the EU-funded project, has been aimed “to use blockchain technology to enable medical data to be stored and transmitted safely and effectively.” The resolution signed in October highlighted that blockchain would “improve data efficiency and the reporting of clinical trials in the health sector, allowing digital data exchange across public and private institutions under the control of the citizens/patients.”

For the EU, the main focus of the implementation of blockchain technology is on the protection of personal data (followed by the General Data Protection Regulation, known as GDPR), which gives “people more control over how they store, manage and use personal data generated online,” says DECODE, another blockchain project funded by the EU. According to the document, blockchain “should protect the privacy of sensitive health data” and allow “citizens to control their health data and benefit from transparency thereon, and to choose which data to share, also with regard to their use by insurance companies and the wider health care ecosystem.”

It also underlines the importance of improving the health care sector with DLT “through electronic health data interoperability, identity verification and a better distribution of medication,” as well as improving the management of health care systems.

There are several major advantages of DLT implementation for the financial sector within Europe. One of them is, definitely, the significance of the blockchain technology in financial intermediation by “improving transparency and reducing transaction costs and hidden costs by better managing data and streamlining processes.”

The EC and local regulatory authorities are to monitor trends of DLT implementation in the finance industry and are encouraged to do “the research and experimentation that major financial institutions have undertaken in the exploration of the capabilities of DLT.”

There are certain risks related to initial coin offerings (ICOs), and the resolution stresses the “lack of clarity with regard to the legal framework applicable to ICOs,” that could negatively affect the investment and funding potential of ICOs. The Parliament asks the EC and national regulatory authorities “to identify criteria that enhance investor protection and articulate disclosure requirements and obligations for the initiators of ICOs” to avoid risks and dangers related to ICO projects.

The certainty and clarity of the crowdfunding in the crypto space could increase investor and consumer protection and reduce “the risks stemming from asymmetric information, fraudulent behaviour, illegal activities such as money laundering and tax evasion.”

How bright is the blockchain future in Europe?

Meanwhile, the Distributed ledger technologies and blockchains resolution has more political significance than legal, as the EC is not required to do anything in response to these requests.

Last week, four major blockchain companies — including Ripple, the NEM Foundation, Emurgo (based on the Cardano blockchain) and “smart ledger” development firm Fetch.AI — formed “Blockchain for Europe” Association. It is aimed to help the EU “shape the global agenda” on blockchain by providing education on the technology’s potential and by developing “smart regulation” of the blockchain industry.

The EC does not appear to be fully involved in promoting a global regulatory framework for the blockchain and cryptocurrency ecosystems. The general idea is to focus on promoting the regulations of the technology on national levels.

A vivid example of it is another declaration signed on December 4 between seven southern European countries — including France, Italy, Cyprus, Portugal, Spain, and Greece. It was reportedly initiated by Malta, commonly known as the “Blockchain Island” of Europe. This declaration calls the EU for help to “promote DLT that is most associated with cryptocurrencies but is increasingly being used by governments to offer services to citizens.”

Switzerland is another European country, but not a member state, that has friendly regulation on the blockchain and crypto industries.

Europe has the ambitions to become “the global leader in the field of DLT,” which can be seen from the number of initiatives taken place over the 2018 year. Still, it might want to consider bringing more legal power to them rather than just “raising the awareness.”