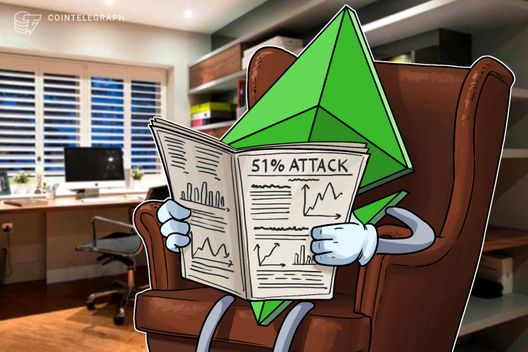 The Ethereum Classic 51 percent attacker has reportedly returned $100,000 to cryptocurrency exchange Gate.io, a post on the official exchange’s blog reports on Jan. 12.

The company further noted that they tried contacting the attacker but didn’t get any reply until now, and that they do not know the reason why the funds have been returned. The exchange declared:

“If the attacker didn’t run it for profit, he might be a white hacker who wanted to remind people the risks in blockchain consensus and hashing power security.”

A white hat hacker is a hacker with a strong professional ethic who uses his hacking abilities for good and not for personal gain. The jargon file, a staple of hacker culture, further explains:

“The term white hat [stands] for an ally or friendly security specialist.”

On Jan. 9, Gate.io published their analysis of the 51 percent attack, finding that a total of 54,200 ETC in total (worth $271,500 at the time), had been transferred during the time of the alleged hack. Major crypto exchange Coinbase separately stated on Jan. 8 that the total amount of money involved in the deep chain reorganization included over $1.1 million worth of crypto.

Gate.io notes that the current hashrate of the Ethereum Classic network is low and that it is still possible to rent enough computing power for another 51 percent attack. Accordingly, the number of required confirmations for Ethereum Classic deposits has been raised to 4,000 on Gate.io to safeguard against more such attacks.

As Cointelegraph recently reported in a dedicated follow-up, Coinbase had identified a deep chain reorganization of the ETC blockchain that included a double spend on Saturday, Jan. 5. By the evening of Jan. 7, the company had taken stock of multiple double spends on the network.

Charlie Lee — the founder of major altcoin Litecoin (LTC) — recently declared that by definition a decentralized cryptocurrency must be susceptible to 51 percent attacks.