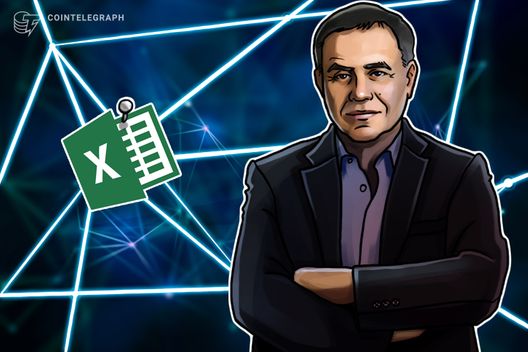 Nouriel Roubini, one of the most notorious cryptocurrency critics, has stated that blockchain is “no better than an Excel spreadsheet.”

Nouriel Roubini, a notorious cryptocurrency critic, has stated that blockchain is “no better than an Excel spreadsheet” during a panel hosted by crypto exchange LaToken on Jan 25.

Roubini is also known for having predicted the 2008 financial crisis, earning him the moniker of Dr. Doom.

Speaking during a panel at the Blockchain Economic Forum in Davos, Roubini defined blockchain as “the most overhyped technology ever,” while noting that Bitcoin and other cryptocurrencies are the mother of all bubbles. He also pointed out during the talk that blockchain and crypto have nothing to do with fintech and private distributed ledger technology (DLT).

Private DLT, according to Roubini, is nothing more than a fancy database, since it is neither trustless nor decentralized. He also pointed out that, just like DLT, central bank digital currencies (CBDCs) don’t have anything to do with blockchain and crypto either. Roubini sees CBDCs mostly as a way to extend access to the central bank register to every individual, instead of granting access to banks only.

Furthermore, Roubini expressed his idea that CBDCs will dominate cryptocurrencies and change banking in radical ways. Moreover, while he foresees that fintech will change finance and that cash will disappear, he is of the opinion that blockchain and crypto won’t play a role in this change.

Nouriel also harshly criticized what he described as the “tokenization of everything,” explaining that having a token for everything would be equivalent to going back to barter. He also pointed out how the characters in the famous Flintstones cartoon have a currency, which is seashells, arguing that tokenization is worse than that.

Talking about privacy, Nouriel pointed out that no government or regulator will permit the use of anonymity-centric cryptocurrencies such as Monero. As Cointelegraph reported in June of last year, Japanese self-regulatory body Virtual Currency Exchange Association (JVCEA) banned the trade of anonymity-oriented altcoins such as Zcash and Monero.

Roubini’s negative stance on cryptocurrency is not a new opinion for him: in an interview with Cointelegraph in October last year, he declared that, according to him, 99 percent of cryptocurrencies are worth zero.