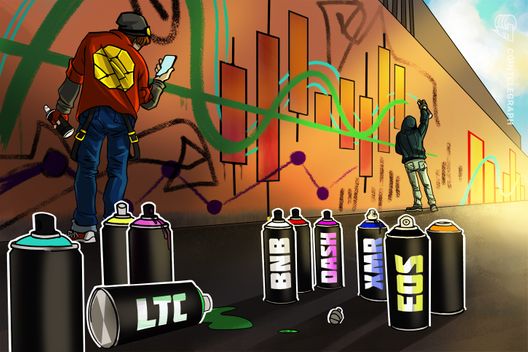 Has the end of this week’s uptick changed the trend in the markets, or is it a dead cat bounce?

Over the past few days, we saw individual cryptocurrencies charting their own course, deifying the absolute leadership of Bitcoin (BTC).

Tron (TRX) and Binance Coin (BNB) are two of the major cryptocurrencies that leaped ahead while Bitcoin continued to languish in a tight range. This shows that the traders are not waiting for Bitcoin to lead the market out of its crushing bear phase.

Bitcoin has been trading in a tight range for the past few weeks, with many speculating that it will eventually break down, as it did in mid-November of last year.

However, positive comments by Robert J. Jackson Jr., the United States Securities and Exchange Commission’s (SEC) only Democratic commissioner, on the possibility of a Bitcoin exchange-traded fund (ETF) getting the green light from the regulator have soothed sentiment.

Meanwhile, Bitcoin’s hash rate rose to its highest level in three months, which could have prompted a few bears to book profits, resulting in a sharp spike.

Most of the gains of today’s top performers came on Feb. 7. Let’s ascertain whether the sudden spurt has changed the trend, or it is only a dead cat bounce that will fizzle out in a few days.

The investors cheered the news of Litecoin (LTC) Foundations’ partnership with software development firm Beam to explore a new protocol called “Mimblewimble” that will improve privacy and scalability.

Litecoin jumped to the fourth position by market capitalization following the spike on Feb. 8. Has the cryptocurrency turned the corner and is on its way up, or is this just a flash in the pan that will die down quickly? Let’s look at the charts to find out.

The sharp uptick in the price has pushed the LTC/USD pair above the first resistance of the downtrend line. It is currently at the 20-week EMA, above which it will face selling at $47.246. A break out of this is likely to carry the pair to the 50-week SMA at $82.

If the bulls sustain above $47.246, it will indicate that the markets have rejected the lower levels and the downtrend is over.

The digital currency might either consolidate or extend its recovery. We shall wait for a price to sustain above $47.246 and for a new buy setup to form, before recommending long-term positions. Short-term traders can stay on the long side of the markets.

Our bullish view will be invalidated if the bears defend the overhead resistance of $47.246. In such a case, a correction towards $33 will be probable.

After the successful sale of the BitTorrent (BTT) token that closed within a few minutes, Binance has announced the sale of the Fetch.AI (FET) token on Feb. 25.

All the lucky BTT investors are currently sitting on huge gains. Hence, the interest in the next sale of the FET tokens is likely to be similarly high. Is this a sign of revival of the initial coin offering (ICO) market? It is too early to confirm, but it is certainly a positive sign.

How do we expect the Binance Coin to react to these developments? Let’s analyze the charts.

We had recommended a buy on a close (UTC time frame) above the 20-week EMA in our previous analysis. However, with this week’s surge, the BNB/USD pair has reached close to the overhead resistance zone of $10–$12. Initiating long positions at the current levels doesn’t give us a good risk-to-reward ratio.

Currently, the digital currency is trading inside an ascending channel. If the bears defend the resistance line of the channel, we can expect a minor dip next week. The traders can use that dip to initiate long positions with a target objective of $12–$15.

Our bullish view will be invalidated if the bears sink the cryptocurrency below the channel and the support level at $5.50. Therefore, the stop loss for the trade can be kept at $5.

The investors are favoring select cryptocurrencies and EOS is one of them. It has risen by about 17 percent this week, taking the spot of the third-best performer.

Although it is difficult to pinpoint the exact reason for the spike, there have been some positive developments in the cryptocurrency. A new scaling solution called “LiquidApps” is expected to be a game changer for EOS.

If the bulls scale this area, we anticipate a change in trend. The pair is likely to enter into a range and gradually move up to $6.8299. The 50-week SMA is close to this level. The traders can wait for the price to sustain above $3.8723 and initiate long positions with the stop loss placed below $2.1733.

However, if the price turns down from one of the overhead resistances, it will remain range bound. The pair will weaken below $2.1733 and will resume its downtrend below $1.55.

Dash has also seen some of the largest gains after the sudden spurt in crypto prices. Does the rise change the trend, or is it just another bull trap that investors should be careful about?

After making a yearly low of $56.214, the DASH/USD pair has been attempting to hold above $64 for the past four weeks. A couple of attempts to break the support level have failed. We now expect the bulls to stage a small recovery.

If the bulls sustain above $74, a move to $87 will be likely. Above this, the pullback can extend to the resistance zone of $103.261–$113, the upper bound being the 20-week EMA. We expect the pair to pick up momentum after breaking above the 20-week EMA.

Conversely, if the price fails to break out of the overhead resistance, it might remain range bound. It will weaken below $64 and resume its downtrend below $56.214. As the price is still very close to the lows and is not showing any reliable buy setups, we remain neutral on the pair.

Riccardo Spagni, also known as FluffyPony on Twitter, the lead developer of Monero and the CTO of Tari, has defended the basic human right to privacy of every individual. However, he also said that Monero (XMR) can be audited, if the wallet owner wants to do so. Moreover, he advised people to use the cryptocurrency as a currency, rather than an investment vehicle. What should the traders do?

The XMR/USD pair has been trading in a tight range near the yearly lows. The bulls have been trying to form a base before attempting a rally.

The critical level to watch on the upside is $60.147, while on the downside it’s $38.5. A breakdown of the range will resume the downtrend.

Nevertheless, if the bulls break out of the range, a rally to $81 will be probable. The 20-week EMA might offer a minor resistance, but we expect it to be scaled. However, $81 might act as a stiff resistance. If the cryptocurrency breaks out of it, we can expect a rally to $150.

Market data is provided by the HitBTC exchange. Charts for analysis are provided by TradingView.